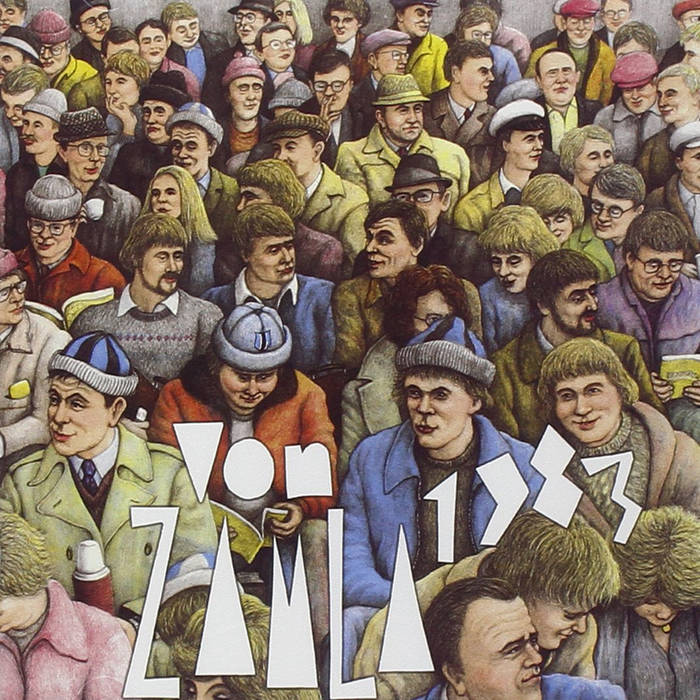 PDD Simply brilliant. I will let others try to define the group's sound. Personally, I will steal Lars' description of the tour: TREMENDOUS FUN!

Never before released, professional, high quality live recordings from the band's German tour of Spring, 1983! This features (often radically rearranged) versions of tracks from No Make Up and Zamlaranama, as well as other oddities & a Samlas track too!

Challenging yet still filled to the brim with toe-tapping melodies and great playing, this sounds as fresh now as when it was originally recorded.

Note: In 2020, we found the original tape that we licensed from Radio Bremen and gave to Lars Hollmer for his use in making this album. There were two very good performances on this tape that Lars did not choose for the final album. We have added them to the end of the program here as 'Bremen bonus'


"1983 is an impressive album of previously unavailable, professional live recordings (the sound is as good as a studio recording) of Von Zamla's 1983 spring tour, which the band regards as among some of their most successful performances. This is the first time any Von Zamla works have been released in the U.S., and it's an especially timely reissue given the increasing crossover between orchestral modern composition and rock (the Rachel's and Godspeed You Black Emperor! being the most then-recent examples; Frank Zappa being an earlier and, for Von Zamla, a clearly influential one).
Von Zamla's instruments and compositions take them several steps further away from rock than, say, Soft Machine, yet they still manage to keep one foot in it through the treatment and mood of the pieces. In "Forgeetyde," they crank out an industrial electronic counterrhythm while rock guitar and bassoon weave a melody through. Just when the dissonance starts to get heavy, a light, airy tune appears and waltzes through with a Danny Elfman sort of carnival flair. The band turns dark on "Doppler" and builds a large, dramatic overture, then follows it with "Akarondo," a piece that opens with pygmy-influenced vocal rounds and handclaps.
Fans of eclectic modern composition and dramatic prog bands along the King Crimson lines will certainly wish they had known of Von Zamla when the band was still around." – Joslyn Lane / AllMusic


This record is the result of a collaboration between Krax/Chance Productions, Cuneiform Records, and Radio Bremen. The music comes from two live concerts in Germany, which took place in Bremen on March 8th and in Hildesheim on March 10th in 1983. The Bremen concert was recorded and broadcast by Radio Bremen. It was engineered at Radio Bremen by Dietram Köster, with sound assistance by Eva Malmquist and Jürgen Kuntze. Chief engineer was Renate Wolters and the producers were Peter Schulze and Volker Steppat. The Hildesheim concert was recorded by ourselves on a multitrack recorder we had brought along on tour. Both concerts were edited and mixed by Lars Hollmer, with the assistance of Wolfgang Salomon, in the Chickenhouse during November ‘98 and January ‘99. The final mix was mastered by Andreas Balaskas together with Hollmer and Salomon in Würzburg, Germany in February ‘99. Live mix and sound for all the concerts was by Eric Faes, who had also engineered the Hildesheim tape.

1983 was the year before “Big Brother”. It was a time pre-midi and even pre-computer for the average person. The Cold War was flourishing, as were Reagan and Thatcher; Perestrojka was nowhere in sight. Impenetrable borders stood between East and West Europe. Another time...
We travelled and lived in a big Swedish [former] postal/passenger bus. Carried all the equipment ourselves, including the PA, up and down on the stages every day. We were Very Strong! And equally enthusiastic. We played on Yamaha grand electric piano, Hohner Symfonic organ, Korg Polyphonic ensemble keyboard, Epiphone guitar, Schecter bass, Hohner accordion, Hohner melodica, Drums, homemade plate, glockenspiel, metal pin-filled cans, triangle, bells, bassoon, oboe, English horn, Casio home keyboard, bottles of different kinds, ring modulator, distortion, octavider pedals, Mesa Boogie, Hiwatt and Peavey amps, a strange PA system, Soundcraft live mixer...and we had TREMENDOUS FUN!! – Lars Hollmer