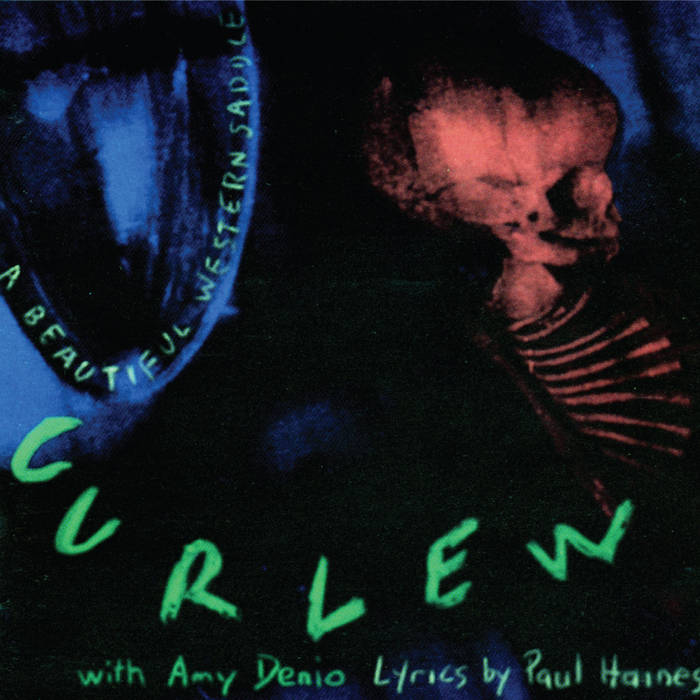 Carsten Pieper This album isn't genre-bending, it's genre-defying. I have to admit, that I'm not familiar with Curlew oeuvre, but normally they seem to be much more avantgardy whereas this album is song based and full of melodies. But keep in mind that these are genre-defying songs ;-)

"Curlew’s A Beautiful Western Saddle is one of those New York genre-bending records that’s ridiculous to categorize. Whatever you call it, it’s the most delightful hour of music I’ve heard all year. To start with, the melodies are gorgeous.... The record is full of brilliant performances too...magnificent"
– The Boston Phoenix

“Rather than drool at length over this album, let me tell you that this is the first great album of 1993 in ANY genre. Give it your time and attention, you won’t be sorry.” – Bill Meyer, Moe, v.5, Spring 1993

“...A Beautiful Western Saddle...marries Curlew's recombinant joy with the unpredictably veering, darkly satiric poetry of Canadian Paul Haines. It’s a match made in heaven... A friend once asked me why more downtown types don’t try to mix vocals into what they do; Saddle makes a real case that more should..” – Gene Santoro, The Nation, March 22, 1993;

“Curlew...has made a career out of doing things no one else ever thought of. Now...they’ve done it again...”–Don Labriola Buzz #95

“This is a beautiful piece of work: Curlew, augented by the vocals of Amy Denio, sets to music 14 poems by Paul Haines, who has collaborated in the past with Carla Bley... What sets this album apart from the previous ones is...here the union is complete. It sometimes feels like the actual sound of the instruments inspired not only the composition, but the words....moments of stunning beauty and ones that are completely believable...Here’s a tough marriage that rings with the thrill of a first date. Do it again.” – David Greenberg, Creem, 6/93

For about five years in the mid 80s/early 90s, not enough people seemed to realize that the best live band in the USA was Curlew. Their heyday featured the classic line-up of leader George Cartwright (saxes), Tom Cora (cello) (who also played with Holland's legendary art-punk band, The Ex, as well as being half of Skeleton Crew, with Fred Frith), Davey Williams (guitar), Ann Rupel (bass) and Pippin Barnett (drums).

Curlew were one of the groups that defined ''the Knitting Factory sound', along with Naked City, Ronald Shannon Jackson and the Decoding Society, James Blood Ulmer, Last Exit, etc. They packed the clubs (CBGBs, Mudd Club, The Knitting Factory), toured hard throughout the world, and thrilled audiences and critics alike with their unique, infectious blend of punk-jazz/downtown sound, roadhouse blues & a distinctly Southern esthetic.

A Beautiful Western Saddle was the last album by the classic lineup, and it differs from all of their other works in that it's an album of songs, with lyrics by Paul Haines (Escalator Over the Hill, Tropic Appetites, etc) and with wonderful singing by Amy Denio. For me, this is the best-ever musical usage of Paul's words (yes, even better than his great work with Carla Bley). ABWS brings the concept of the "art song" into a whole new light.

"The idea for A Beautiful Western Saddle came about as the result of two concerning streams of thought: first, my own interest (later shared by the rest of the band) in Paul’s poetry as song lyrics and, second, the desire for Curlew to work with text and singer.

I had been making music to Paul’s words since 1979 when Kip Hanrahan asked me to set some of them to music for a video being made to Paul’s writing called Third World Two. Later I contributed two more pieces for inclusion on Darn It, a recording Kip was making using Paul’s words—all the while thinking that more and more of them would make splendid song lyrics.

When the possibility of doing a performance at New Music America New York 1989 appeared, I saw a chance for Curlew to do an entire concert of Paul’s work and began showing it to the rest of the band, who then wrote their own versions of the best way to present these lyrics in a song. Deciding who should sing them was easy—Amy has been one of our favorites for a long time. Herein lie the results."
– George Cartwright, 1989