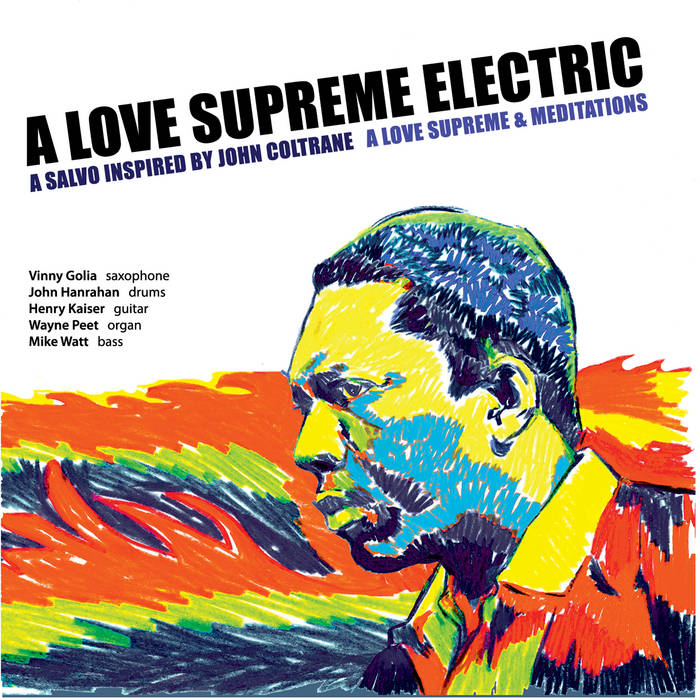 Watch a great video where Henry Kaiser talks about A Love Supreme *and* you get to see it performed live!

Some records tell you what’s what. That’s not a bad thing: there’s a place in music for reportage, for commentary, for what’s going on. But A Love Supreme Electric, the collaborative project between Vinny Golia, John Hanrahan, Henry Kaiser, Wayne Peet, Mike Watt, and John Coltrane’s immortal spirit, starts from a different place.
“What if?” it asks.

In fact, ALSE asks “What if?” over and over again, joyously interrogating the twin templates of Coltrane’s A Love Supreme and Meditations from a kaleidoscopic array of angles. All five performers weigh in with their solo perspective, but the magic is that the listener is invited to contribute, too. After hearing this music, you may never hear Coltrane in the same way again.

Kaiser, the project’s de facto theorist, chose to start with “What if A Love Supreme and Meditations are two parts of one single expression of an ecstatic spiritual state?”

“I had known that Coltrane intended his Meditations suite to be a spiritual sequel to his A Love Supreme suite,” Kaiser writes in his liner notes for A Love Supreme Electric, notes that are as provocative as the music itself. “Thus it was natural to suggest that with our A Love Supreme Electric gigs, we often play Meditations as the second set. After having done this more than a few times, I would note that….the two suites really do fit together to actually be one 2-part suite, where all the individual sections inform, deepen, cross-reference, and expand on one another, in both the musical and spiritual domains.

“The 2-CD set that we present to you here,” he continues, “is this current crew’s fiery salvo of our testimony to this.”

The band’s recognition of the essential unity of Coltrane’s two masterpieces is profound, as is the ease with which saxophonist Golia, percussionist Hanrahan, guitarist Kaiser, keyboardist Peet, and bassist Watt answer another big “what if?”: “What if Coltrane had survived cancer—which took him at the untimely age of 40, in 1967—and joined his occasional colleague Miles Davis in pioneering electric jazz?”

There are more of these questions raised in the liner notes. Close the door, unplug the phone, and press “play”. You’ve got an hour, 47 minutes, and 41 seconds to think.