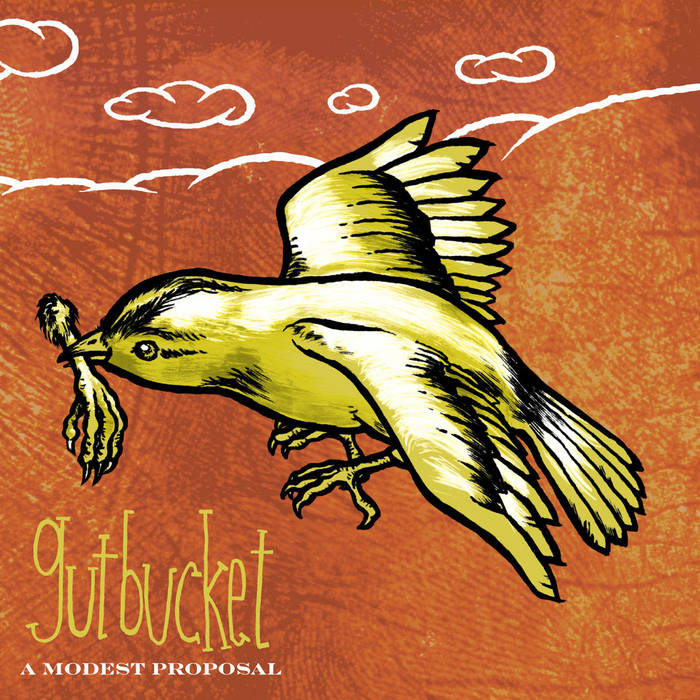 "Imagine the bastard child of King Crimson and Soft Machine, with Albert Ayler and Eugene Chadbourne as godparents, and you come close to capturing the essence of Gutbucket. There's plenty of madness from this quartet, but there's a method to it, a twisted prog rock aesthetic that can plunge from the manic to the deliciously melodic (as on part of "Side Effects May Include," where saxman Ken Thomson becomes almost elegiac). Although they don't flaunt it, all the bandmembers are superb musicians, capable of moving through warped klezmer into avant jazz without missing a beat. However, none of this is showing off of the look-how-clever-we-are kind. Rather, it's music-making and exploring the edges, nibbling at them to re-create the elements and discover something new, which they do admirably. It's a superb record, one that fans will love..."
– Chris Nickson/All Music Guide

"Gutbucket continues to play with the frantic intensity of a punk band while exhibiting dazzling turn-on-dime chops."
– JazzWeek

"...teeming with a certain benevolent mania, a clearly discernible sense of humor, considerable virtuosity, and not a little imagination...."
– San Francisco Bay Guardian

"Like any self-respecting jazz-thrash-rock-latin-noise band from the dark underbelly of New York, Gutbucket have a peerless way.... There is something smart, sleek and assured about Gutbucket, and when they begin firing on all cylinders it makes for an exhilarating, intelligently performed racket."
– The Guardian (UK)

Destroying walls between art-rock, avant-squonk, jazz-core and beyond, the decade-old New York quartet Gutbucket is not only equally comfortable playing in front of 900 sweatily pogo-ing teenage skate-punks, a crowd of cosmic indie-psych freaks, on an anarchist German art collective’s house-boat or even teaching master classes in the music departments of schools around the country, but most importantly, their music fits right in. A Modest Proposal solidifies Gutbucket's place at the forefront of a revitalized avant-garde music scene in New York, where sparkling new venues pack in 20-somethings at Steve Reich gigs and Bang on a Can's all-night music marathons draw crowds for Stockhausen at Sunrise. The band has spent the past 10 years injecting a shot of exuberance into the minimalist cool of the New York downtown scene. Founded by bassist Eric Rockwin, saxophonist Ken Thomson, guitarist Ty Citerman, and drummer Paul Chuffo, Gutbucket built their all-important live reputation in New York clubs before spreading across east coast college towns. Trips to Europe soon followed, with over a dozen tours in 19 countries taken to date. Joined in 2007 by longtime friend Adam D Gold on drums following Chuffo's departure, Gold's musical voice was quickly deemed a necessity. A close friend, he's also good for van conversation. Which is good. Because there are miles to go before Gutbucket sleeps!