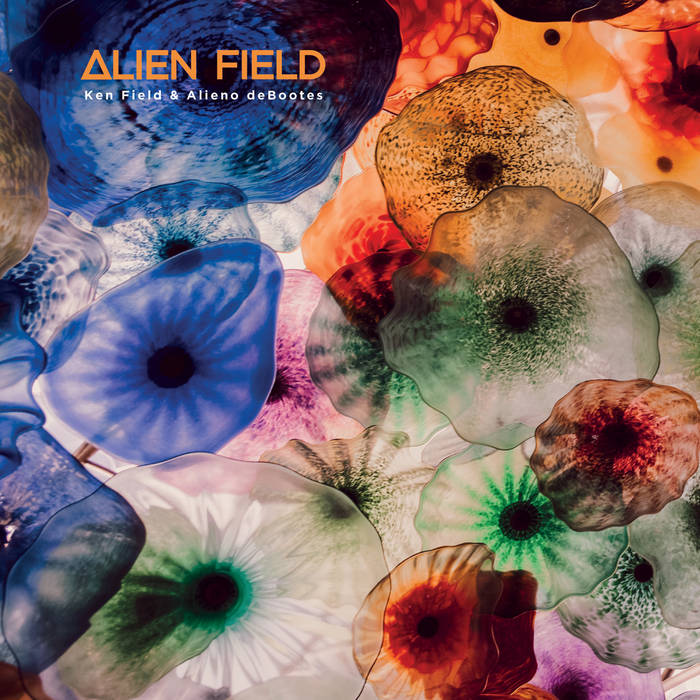 Sometimes unusual circumstances create perfect conditions for long-considered but never materialized collaborations. This distanced virtual meeting between Ken Field and Alieno deBootes (aka Alessandro Pizzin) is such an example. The rich & intimate interplay between the warm acoustic woodwinds of the American saxophonist and the icy keyboard and synthetic atmospheres of the Italian experimenter belies the circumstances of the recording process. The music is layered within narrative contexts which, while telling many different stories, maintain a style that appears unique and original, straddling pure improvisation and rigorous composition.

Ken Field:
"I first heard the music of Alieno DeBootes (aka Alessandro Pizzin) about 20 years ago, and quickly fell in love with his wonderful solo work. We stayed in touch over many years, and we finally met in person when I had an opportunity to travel from my home in Cambridge, Massachusetts (USA) to Venice, Italy.
In March 2021 he invited me to collaborate on a still undefined project.
We worked independently, sending files back and forth, and I recorded my material in my laptop-based home studio ..."

Alieno deBootes:
"As a longtime fan of the Birdsongs of the Mesozoic, after listening to Ken Field's first solo album "Subterranea" (back in 1991) I soon imagined that I wished to invite him to collaborate with me, since his sound on saxophones and flute seem to me to have such a particular, special, and original voice ... "

01 - Short Trip To Bootes
"Boötes is a constellation in the northern hemisphere containing one of the brightest stars in the night sky, Arcturus. Boötes is an ancient Greek word that roughly translates as the ox-driver, or herdsman. I invited Ken to make a hypothetical journey together to a real and distant place to which - in my imagination - I am particularly attached for mysterious reasons of identity."
-- Alieno deBootes

02 - Dwelling
"Inspired by Alieno's beautiful bed of drones, I built layers of improvised and maybe somewhat enveloping saxophone structures - a place that maybe one could live for a while."
-- Ken Field

03 - Hmmm
"This piece for layered saxophones is a bit of a prayer, or more realistically and appropriate to my non-religious sensibilities, a hope: for kindness, peace, and the thoughtfulness that is often lacking in our current societal environment. My hopes are interrupted periodically by acoustic crashes: reminders of the reality we all share."
-- Ken Field

05 - The Garden
"During a lockdown afternoon I was trying to distract myself from the unpleasant situation around me sitting in the backyard. Coincidentally a neighbor of mine (who I haven't identified yet, but with very good taste in music) was obviously listening to the very beginning of " Out-Bloody Rageous" from "Third" by Soft Machine and some of those hypnotic sounds coming from afar mixed with the extraordinary song of the blackbirds that usually brighten my days in the garden. A few weeks later I thought that that fragment of time preserved in the digital recording could represent a "virtual space" to ask Ken to "walk" in with his fascinating sound ... when the project was finished I was particularly struck by his final comment: "I find that such a garden would be a nice place to spend a lot of time"
-- Alieno deBootes

07 - Izar 1
"Epsilon Boötis, officially named Izar, is a binary star in the northern constellation of Boötes. Its name means "Veil" and its binary status fascinated me, suggesting that an exploration around it needed a second view ... hence "Izar 2".
-- Alieno deBootes

08 - Izar 2
"I played flute before I played saxophone, and I love any opportunity to return to this most basic and primitive of music-making machines. On this, and on the preceding Izar Part 1, I am able to utilize a variety of sounds and textures that are unique to the flute, including some created by deconstructing the instrument entirely."
-- Ken Field


KEN FIELD
Ken Field is a saxophonist, flautist, percussionist, and composer.
Since 1988 he has been a member of the internationally acclaimed electrified modern music ensemble Birdsongs of the Mesozoic, with whom he has recorded eight CDs.
Field also leads the Revolutionary Snake Ensemble, an experimental and improvisational brass band.
Field is also an award-winning composer of music for animation, film, and dance.
His music is heard regularly on the popular internationally-broadcast children’s television program Sesame Street, in collaboration with his late wife, animator Karen Aqua.
His soundtrack work has been broadcast on HBO, the Movie Channel, the Sundance Channel, and PBS.
Ken Field is an Applied Microphone Technology Endorser and a Vandoren Performing Artist, and uses Vandoren reeds and mouthpieces for performance and recording.

ALIENO DEBOOTES
Since his first significant musical experiences in the late seventies, his curiosity towards the possible frontiers of sound has been the guiding light of his approach to the art of sound.
His research path has always evolved in the awareness of the infinite combinations in which sounds and noises can be organized to create new and ever changing creative sonic illusions. Hence his self-definition of "soundician".
Starting from the early eighties with his experimental electronic pop band RUINS (he actually co-founded with Alex Masi in 1978) he recorded various albums often performing in art galleries multimedial events.
Since then he also has been a founding member of other musical projects like HEX, HAKKAH, GRAMPUS, WIND PROJECT and, more recently, THE BOOTES TRIO and MICROCULTURE.
From the second half of the '90s onwards he dedicated himself to the work of independent producer, varying amongst all musical genres, from pop to experimental music, continuing in the perspective of collaborating with his expertise to offer creative opportunities to equally interested and curious musicians.
Nowadays, under his nickname Alieno DeBootes, he is mainly focused on recovering archival material while simultaneously recording new compositions to showcase his past and present creative dimension.