by Nick Macri & Mono No Aware 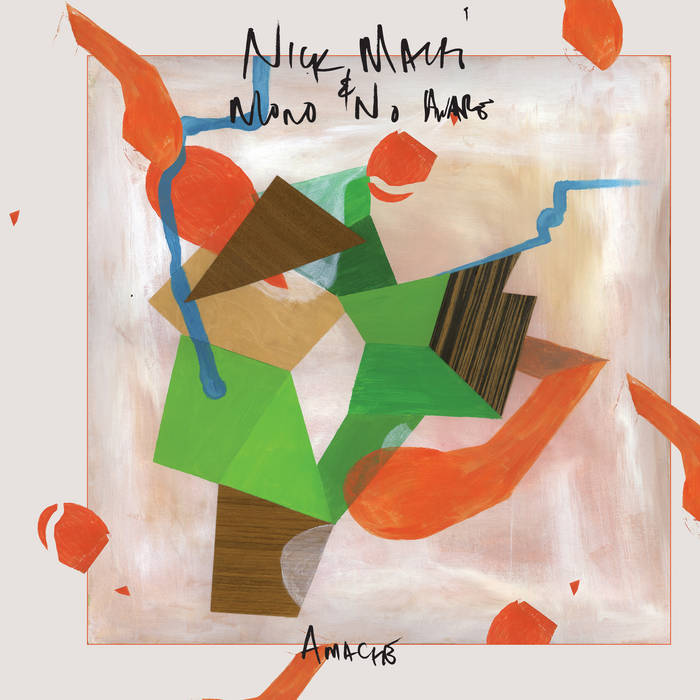 Bassist Nick Macri has been exploring Chicago’s slipstream of creative music for decades from collaborative, creative groups and ad hoc improvised pairings, to notable sideman gigs, and the rare solo excursion. He is a founding member of the collective trio Stirrup with Fred Lonberg-Holm and Charles Rumback and is/was a contributing member to many, varied groups including Ken Vandermark’s Audio One, Momentum 3, and Momentum 5 groups, instrumental explorers Euphone and Heroic Doses, art-pop quartet The Zincs, and the pastoral, psych-folk of The Horse's Ha (with Janet Bean and James Elkington). He has performed and toured as a sideman and recorded sessions with an eclectic list of artists including Laetitia Sadier of Stereolab, The Sea and Cake, Daughter of Swords, Nina Nastasia, Azita, James Elkington & Nathan Salsburg, Joan Shelley, Wanees Zarour, Hector Zazou of ZNR, and visual artist Bruce Licher of Savage Republic. Additionally, he has improvised in duo or group settings with various musicians including Angel Bat Dawid, Bill MacKay, Eve Risser, Isaiah Collier, Avreeayl Ra, Sylvaine Hélary, Tim Daisy, and many more. He has performed across Europe, Asia, South America, and North America including concerts at Saalfelden Jazz Festival (Austria), Festival de Musique Actuelle Victoriaville (Canada), Reading Festival and Leeds Festival (U.K.), World Music Festival Chicago, All Tomorrow's Parties (U.K.), the London Institute of Contemporary Arts, the Museum of Contemporary Art, the Logan Center, and the Pritzker Pavilion (Chicago).

About Amache:
My natural state as a musician has always been one of collaboration. Whether creatively conspiring with other players in a rehearsal room or on a recording session, side-mousing it (to borrow a phrase from Mike Watt) on a tour, or building something from the ground up with some long-standing comrades, I am most comfortable making noise with others. So, the opportunity to perform a solo, improvised set before a studio audience at Experimental Sound Studio was intimidating, exhilarating, and a challenge I knew I had to accept. So, thank you to Tim Daisy, Ken Vandermark, and Andrew Clinkman for the chance to be alone with my thoughts to see what came to mind and to E.S.S. for documenting it.

Amache is dedicated to The Chicago Resettlers, the tens of thousands of Japanese American citizens who reestablished their lives and communities in Chicago after being incarcerated by the United States in the internment camps of World War II.

“...combines jagged amplified bass and textural percussion into a boiling haze...gritty electronics with recorded vocalizations as he generates feedback and noise from his amp… melodic yet open-ended. Subtle processing gives certain passages a shimmering nature, with repetitive echoes and pulses touching on minimalism...At only 34 minutes, Amache is confidently unpretentious. Macri says his piece and then stops. The album is a relentlessly outside exercise in experimentation, and yet quite charming in its raw honesty. Highly recommended.”
– Avant Music News, Mike Borella

"Chicago bassist Nick Macri is the model of versatility. He has appeared with a formidable gallery of jazz, folk, and rock musicians, including Ken Vandermark, James Elkington, Laetitia Sadier, Bobby Conn, and instrumental combo Stirrup. Adept on electric bass guitar and acoustic double bass, he can be unassumingly supportive or assertively tuneful, depending on what the situation requires. But he rarely performs on his own, which makes the music on his debut LP, Amache (Cuneiform), especially surprising. It’s credited to Nick Macri & Mono No Aware (“mono no aware” is a Japanese phrase referring to cognizance of the impermanence of things), but Macri is the only musician on it. He opens the album with tolling, almost prayerful metal percussion, but that vibe proves quite transient when he abruptly burps his electric bass. “How to Be in the Body . . . Without Jumping Out of Your Skin (for Tracy Pew)” is named for the late bassist of the Birthday Party, the ferocious postpunk combo where Nick Cave made his bones. The piece wraps around one and a half sides of a vinyl record, taking a winding path from simple, scorched melody to electronically scoured noise. Then Macri turns to his acoustic bass for the title track, dedicated to the thousands of Japanese American citizens who where shipped to internment camps during World War II and then made Chicago their home after the war. Macri has a familial connection to this heritage, and the piece’s solemnity makes it feel a bit like a prayer of remembrance."
– Bill Meyer / Chicago Reader

All music performed by Nick Macri. Recorded live in front of a studio audience at Experimental Sound Studio in Chicago on September 30, 2019 by Alex Inglizian as part of the Option Series curated Tim Daisy, Ken Vandermark, and Andrew Clinkman.