by the cellar and point 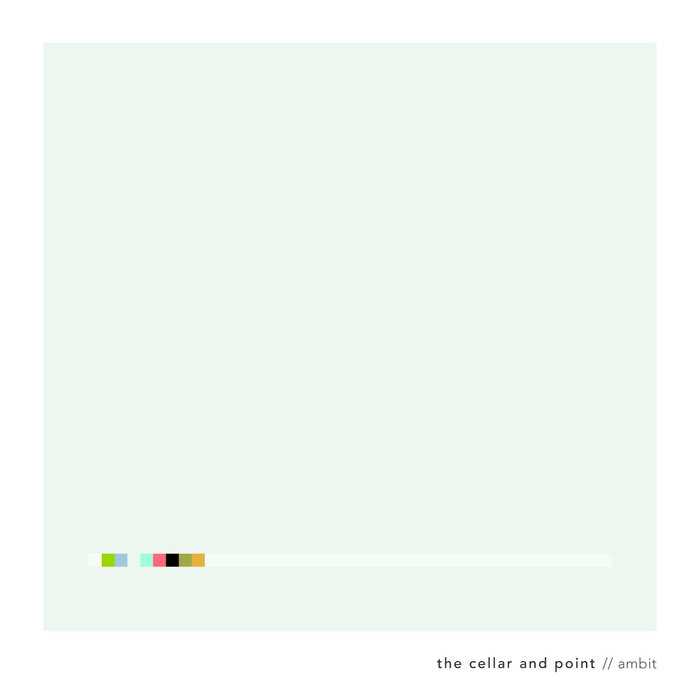 p_zetner What a find! From the energetic rhythms of the “Tabletops” and “White Cylinders” to the lush atmospherics of “Arc” and “Ruminant” this is thoroughly engaging and exciting music. An outstanding work! Favorite track: white cylinder (a).

Brae Grimes High level management of rhythmic and harmonic dissonance. The complexities of The Cellar and Point's music are presented in digestible, purposeful bites - often sitting within a groove that is then overlayed with melodic, almost riff-like, patterns. Each layer has its own character and nuance, played with unmistakably human-feel, yet with almost digital precision. Shades of Claudia Quintet, Steve Lehmann, Zappa, but all with a flair that is truly unique to these artists. Favorite track: white cylinder (a).

Sven B. Schreiber (sbs) This album appears in the collections of both "LeAhcim Retsehcnam" and "Alan Terrill", so it must be good. Actually, this term doesn't really describe it adequately - it's well beyond just "good"! The music conceived by Joseph Branciforte and Christopher Botta incorporates an interesting blend of genres - post-rock à la "Tortoise", classical chamber music, and RIO come to mind. To apply a general term, I'd categorize it as an ingenious form of "avantgarde". Favorite track: arc.
more...

Drummer/producer Joseph Branciforte and guitarist Christopher Botta had long imagined a fluid synthesis of their wide-ranging musical interests. The detail of modern concert music; the improvisational sensibilities of downtown jazz; the emotional directness of alt-rock. The production value and formal concision of pop, the head-nodding grooves of hip-hop and electronica, the immersive sonics of ambient music. Might it be possible to draw equally upon these influences, while transcending mere collage? How could these manifold musical experiences be distilled into a personal, unified aesthetic? And could this music be presented in the context of a working ensemble - not just a studio project - but a band?

THE CELLAR AND POINT is one possible answer to those questions. After 3 years spent crafting their debut record, the “garage-chamber” septet will release AMBIT on Cuneiform Records this fall. Time Out New York has described the ensemble's sound as “ethereal chamber-prog” and lauded their live performance as “brainy, yet highly engaging.” The New York Times has taken note of “the chamberlike enterprise of a productive partnership, of the percussionist Joseph Branciforte and the guitarist Christopher Botta.” But AMBIT, which features seven Branciforte/Botta originals, plus arrangements of composers György Ligeti and Anton Webern, marks the group's first complete musical statement.

Hometown friends from Ramsey, NJ, Branciforte and Botta grew up making music together: from their middle-school days of Rage Against the Machine covers and high school explorations of jazz improvisation, to their formal studies of classical and contemporary composition, electronic music, and record production at Berklee College of Music. “We absorbed a lot of the same music at the same time,” says Branciforte. “From Autechre to Morton Feldman to Wu-Tang Clan to J.S. Bach – there was a lot of time spent listening, discussing, analyzing.”

The two eventually moved back to New York and, after several years of composing and creating demos of new material, THE CELLAR AND POINT took shape. The pair began recruiting an impressive cross- section of young talent from New York City’s classical, jazz, and new music scenes to bring their vision to life.

Multi-percussionist Joe Bergen, founding member of Mantra Percussion and TRANSIT, was enlisted on vibraphone. “We knew we wanted to build the group around a distinctive melodic voice – but also something not too indicative of any particular genre,” says Botta. On White Cylinder, a 9.5-minute, drum'n'bass influenced tour de force, Bergen navigates syncopated, angular lines with mechanical precision. On Étude XV, he reveals a more ethereal approach, delicately teasing out the voices in an arrangement of Ligeti's late piano etude.

Violinist Chistopher Otto and cellist Kevin McFarland, members of the internationally acclaimed JACK Quartet, were also early additions to the group. Otto and McFarland command a variety of orchestrational effects: from machine-gun pizzicato runs and webs of rhythmically-complex counterpoint to extended techniques honed from years of Xenakis and Lachenmann. On Ruminant, they improvised multiple layers of spectral effects atop their basic string parts, later edited by Branciforte to form a dense sonic tapestry.

Guitarist Terrence McManus, known for his work with forward-thinking jazz musicians Gerry Hemmingway, Ellery Eskelin, and Tyshawn Sorey, not only had the requisite skills to execute the technically-demanding electric guitar parts, but also brought an improvisational x-factor that helped breathe new life into the meticulously notated music. Tabletop (a) features a scintillating McManus solo, while Tabletop (b) finds him enhancing the group texture with Frisell-like chordal swells and loops.

In early 2011, after a year of performance-testing and polishing, THE CELLAR AND POINT entered the studio. Branciforte and Botta handled engineering duties, with Branciforte additionally acting as producer. “We knew from the start that we wanted to engineer, produce, and mix the record ourselves,” he says. “There has always been something appealing about the DIY recording ethos of someone like Sufjan Stevens, where a homegrown approach to recording seems to amplify the idiosyncratic qualities of the music.”

In late 2011, Branciforte and Botta traveled to Los Angeles to work with studio bassist Rufus Philpot. Philpot's playing on AMBIT strikes a balance between providing a rich bottom-end foundation and taking an active melodic and textural role. On Purple Octagon Philpot switches to fretless bass and, along with Branciforte's propulsive brushwork, helps set up a infectious, driving groove.

Over the course of 2012 and 2013, the record proceeded in stops and starts. Branciforte soon became busy producing and engineering another epic recording, Ben Monder's Hydra (Sunnyside, 2013), as well as recordings for Tim Berne, Mark Dresser, Michael Attias, Ingrid Laubrock, and Matt Mitchell. He and Botta continued to supplement the basic tracks at their Brooklyn post-production studio – Branciforte laying down piano, Moog bass, glockenspiel, percussion, and drum loops, with Botta adding banjo and guitar loops. Finally, by the end of 2013, a finished product began to emerge.

The record was mixed and mastered by Branciforte in early 2014. But not before adding one final piece. The title track, Ambit, which acts as a coda to the album, was actually the result of a technical error.

“The original version of Ambit was around 7 minutes long. It was certainly one of the tunes we had spent the most time working on, although we were never quite satisfied with it. One day during recording, there was a sudden sample-rate error that ended up glitching the playback to around half the piece's original speed. After a few minutes of sitting there and listening, Chris and I both looked at each other and said, half-jokingly: 'maybe we should just use this instead?'”

The pair ended up treating the clocking error as the inspiration for the final album version, re-conceiving the piece from the ground-up. “It seemed strangely emblematic of the entire project: identifying and striving towards an ideal, reaching the limits of intentionality or control - and then recognizing a new way to proceed through some serendipitous element or event,” says Branciforte. “There truly would have been no other way to arrive at this result without going through the entire process.”

the cellar and point