Been Up So Long It Looks Like Down to Me: The Micros Play the Blues 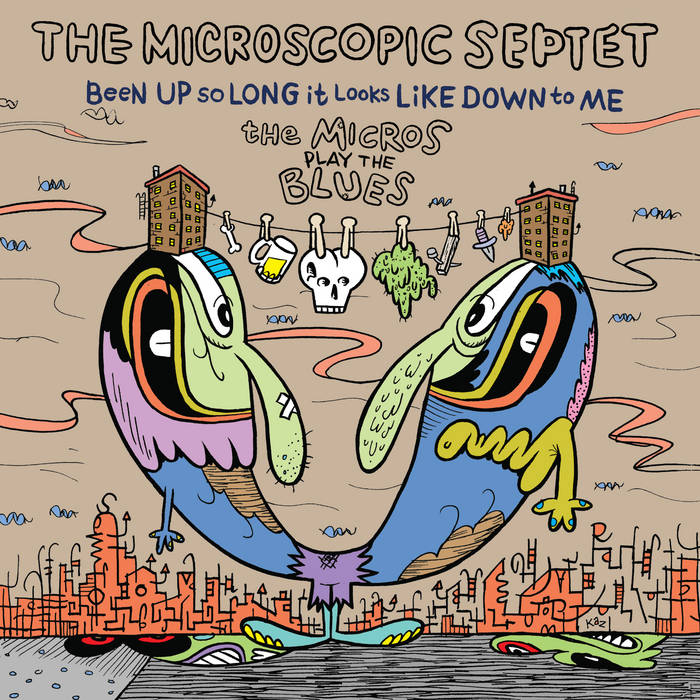 Nick Bradey Superb new release from this amazing
outfit . Recommended without hesitation ; usual high standards maintained. I would like them to perform
in the UK , but I will try to catch them
when I next come to New York .

It takes an unusual band to make news out of the blues, and The Microscopic Septet deliver a gripping investigation of the form on Been Up So Long It Looks Like Down to Me: The Micros Play the Blues, which continues the band’s brilliant resurgence.

Since storming back into action in 2006 after a 14-year hiatus, the radically old-school combo has continued to evolve and extend its reputation. The new album builds on the band’s longstanding love of that most basic and profound musical form, bringing the same reverently irreverent and insistently playful approach to the blues that has marked the Micros music from the beginning. The blues provide another avenue for the band to explore jazz history while forging a sound quite unlike any other ensemble.

Simultaneously embracing the past and the future makes perfect sense when you consider the fraught time and place that gave birth to the Microscopic Septet. In the early 1980s the New York jazz scene was divided, sometimes bitterly, between the emergence of the ‘new traditionalists’ as typified by Wynton Marsalis and the experimentation and stylistic mash-ups of the emerging downtown players. Rejecting allegiance to any particular camp or faction, the Micros forged their own path with an ethos succinctly summed up by co-leader Phillip Johnston: “Break all the rules and respect all the saints.”

Embracing jazz’s populist legacy, the Micros brought Uptown jazz back Downtown, where they made a compelling case that swing could look forward as well as backward. The band adopted a name that playfully alluded to its orchestral palette. As Johnston explained at the time, “The instrumentation is enough to give us a big range of colors and work compositionally in an expansive way.”

The band is built upon the felicitous partnership of Johnston and Joel Forrester, who met in the early 70s and bonded over shared musical aesthetics, humor, and similarly skewed worldviews. Eager to break away from the jazz straightjacket of head-solo-head formats, they honed extended, lapidary jazz compositions that segued gracefully between different themes in a single piece, hearkening forward to forms employed by Sun Ra, Duke Ellington and Jelly Roll Morton. The music drew on the entire history of jazz, as well as polkas, tangos, antic cartoon themes, klezmer, and new wave rock. No matter how eclectic their influences, the Micros always hewed to the band’s prime directive. “It’s gotta swing, whether its Latin or R&B or straight-ahead blowing,” Johnston says. “That’s the foundation of what we do.”