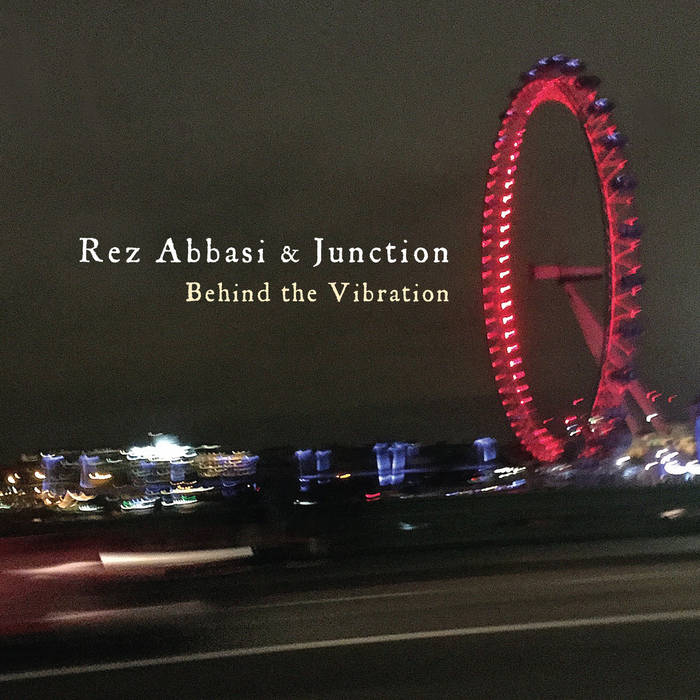 Calvin Chase Right on for dishing back at Downbeat, I thought it was a bullshit review. As a product of 70s rock jazz fusion, I find this work soothing and soulful, giving me what I need to groove with. Playing along with it, I see the path the groove leads to......just loving it!!
Thanks, Cal Favorite track: Uncommon Sense.

John Cratchley This is definitely hallmarked but does not give up all its secrets at once...measured and exacting with an almost laconic vibe, it will grow and grow on you and might well become indispensable.

A junction is the point at which several things converge. For the visionary and award-winning jazz guitarist Rez Abbasi, his new band Junction weaves together musical currents he’s spent his career navigating. Abbasi has been at the center of some of the most enthralling and culturally expansive music of the past two decades, and his Cuneiform debut Behind the Vibration introduces a bracing new body of music, a sinewy 21st century approach to jazz-rock inspired by his far-flung influences.

“Everything I do musically is stimulated by call and response,” Abbasi says. “I did the Acoustic Quartet project of covers from the ‘70s jazz-rock period and that impacted me to want to do an electric project of all originals. The new album reflects a continuum of what I’ve been doing all along – finding fresh orchestrations to present my music through. In some ways this project connects me more directly back to my first love, the energy that comes out of rock music. I wrote new tunes for this band and it was time for all these musical worlds to collide.”

Junction, the electric project that Abbasi formed to bring his original tunes to life, features Mark Shim on tenor saxophone and the electronic MIDI Wind Controller, Ben Stivers on keyboards, B-3 organ and Rhodes, and drummer Kenny Grohowski. The band is a supremely maleable ensemble that has forged a poised and texturally accute group approach. While exploring a vivid palette of electronic sounds and aggressive grooves, Junction maintains the dynamics, precise calibration, and interactive imperative of an inspired jazz ‘acoustic’ combo.

Sonically surprising, the album opens with “Holy Butter,” a piece inspired by a collaboration with classical South Indian dancers. In the first of many sonic feints, what sounds like a deeply funky bass solo is actually Shim getting down with his MIDI Wind Controller. Indeed, not having a defined bass player is a significant element of Junction, opening up the band’s sound as Stivers and Shim alternate low end responsibilities.

Inspired by the Arab Spring, “Groundswell” is a slowly ascending tune that, while originally written for another ensemble, comes home in Junction, with Stivers on B-3—“the first electric keyboard instrument,” Abbasi notes—and a searing Abbasi solo followed by Shim’s oragami-angular tenor. If that piece evokes the mounting of external pressure, “Uncommon Sense” suggests a wending internal spiritual journey with a hypnautically sinuous opening guitar line. As Abbasi puts it, “The title refers to a ‘sense’ that’s beyond our five and one that’s more difficult to connect to due to the clutter in our minds.” Before long, the becalmed lyricism gives way to a frantic search powered by Grohowski’s exceptionally deft trap work.

A sparsely decorated noir scene that emerges and departs without pausing for a solo, “And I You” is a brief, cinematic mood piece that arrives mid-album like a shimmering urban oasis. “Self-Brewing” is one of the album’s most fusion-y pieces, with a steeplechase theme introduced by Abbasi and Shim on Midi Wind Controller. The album closes with “Matter Falls,” a mid-tempo anthem that hints at South Asian cadences. Both grand and invitingly intimate, it’s a crunching tune that points to further explorations. Clearly, Junction is just one stop on a spectacularly rich and incident-filled sojourn.

More than a meeting place, Junction is a communion of four distinct voices. Born in Jamaica and raised in Richmond, Virginia, saxophonist Mark Shim has been a stand out on the New York scene since the mid-1990s. He first gained attention via bari legend
Hamiett Bluiett, who featured him on his classic 1995 album Young Warrior, Old Warior (Mapleshade). He went on to work with

“Mark is a ridiculous tenor saxophone player, but he’s also really into production, working with drum machines and producing people’s records,” Abbasi says. “He’s tapped into the Zeitgeist, the vibe that’s going on now and I’m open to all of it.”

Raised in Las Vegas in a highly musical family, trained in classical and jazz, Ben Stivers got his start on the Miami studio scene collaborating extensively with the Bee Gees. A highly versatile player, he’s been sought out by the likes of Ricky Martin, Chris Botti, Matchbox Twenty, and Jose Feliciano. Since moving to New York, he’s also worked extensively in jazz settings.

“You don’t have many musicians as eclectic as these in the past,” Abbasi says. “For example, Kenny has all this modern heavy metal language and then he can turn around and earnestly play like Paul Motian or Tony Williams. Ben has been musical director and keyboardist for some huge pop acts but has also performed my complex Hindustani-influenced jazz music. The versatility is pretty unusual and tangible and that’s what this project is about, capturing and containing that vastness of energy in a ‘jazz’ experience.”

Born in Pakistan’s teeming commercial metropolis Karachi and raised in Southern California, Abbasi is anything but a usual jazz player himself. He’s spent his creative life navigating the crossroads of disparate musical realms. Growing up in Torrance, he first gravitated to the guitar under the sway of rock bands like Rush, Van Halen and Led Zeppelin. Straight ahead jazz had caught his ear by the time he started Palos Verdes High School and he thrived in the school’s respected band program (future tenor sax star Mark Turner was a classmate). He had his first guitar epiphany when a friend took him to see Joe Pass and Ella Fitzgerald.

“I was 16 and at that age, technique and virtuosity are elements that bring you in,” Abbasi says. “The idea that an older gentleman could play circles around Eddie Van Halen was really striking. I realized I had a lot of work ahead of me. That same year, I saw Allan Holdsworth, the polar opposite of Pass, and that was another ear and eye opener that lead me into a different direction.” I do still love Pass and Holdsworth, but they didn’t end up becoming big influences, rather, in combination they revealed two very opposing sides of jazz.”

He wasn’t drawn to Hindustani music until he happened to attend a private party down the street from his house where tabla maestro Zakir Hussain was performing with santoor master Shivkumar Sharma “and it blew me away,” he recalls. “I felt that same elation when I saw Pass and Holdsworth. Sitting five feet away from these gentlemen, I was amazed by the striking sounds coming out of their instruments. I thought, I’ve got to get more involved with this side of my life, my roots.”

After attending the University of Southern California, Abbasi made the move to New York City in the late 1980s to study jazz and classical music at Manhattan School of Music (while immersing himself in North Indian classical music on a pilgrimage to India under the tutelage of tabla giant Ustad Alla Rakha, Zakir Hussain’s father). He made his recording debut as a leader in 1995 with Third Ear. Recognized as a strikingly original voice, Abbasi released a series of landmark sessions in the succeeding two decades focusing on his original compositions, including 2005’s Indo-jazz Snake Charmer with Indian-born vocalist/songwriter and now wife, Kiran Ahluwalia, and 2009’s Things To Come (Sunnyside) with Ahluwalia, Vijay Iyer, Rudresh Mahanthappa, Johannes Weidenmueller and Dan Weiss (an album hailed by DownBeat as one of the decade’s top CDs).

In many ways 2009 was a banner year, as Abbasi received a prestigious Chamber Music America commission to compose new works for the same ensemble, Invocation. He also formed the Rez Abbasi Acoustic Quartet, or RAAQ, with vibraphonist Bill Ware, drummer Eric McPherson and bassist Stephan Crump, to explore both originals and cover tunes. He introduced a new trio with bassist John Hebért and drummer Satoshi Takeishi on 2013’s Continuous Beat (Enja), a group that like RAAQ interprets originals and ingenious modern jazz compositions.

With this newest album, Behind the Vibration, realized via his new electric Junction, Abbasi takes another bold step, embracing his rock ‘n’ roll roots with a bear hug that encompasses post-bop, South Asian traditions, and state of the art sonics. “More than anything that I’ve ever recorded, this album is the convergence of everything I’m interested in,” he says. “The musicians I’ve chosen are versatile enough to pull it off. It’s not only all of the influences that have come up to this point, it’s also the process of merging it with the technology of today. This is music that could’ve only happened now.”