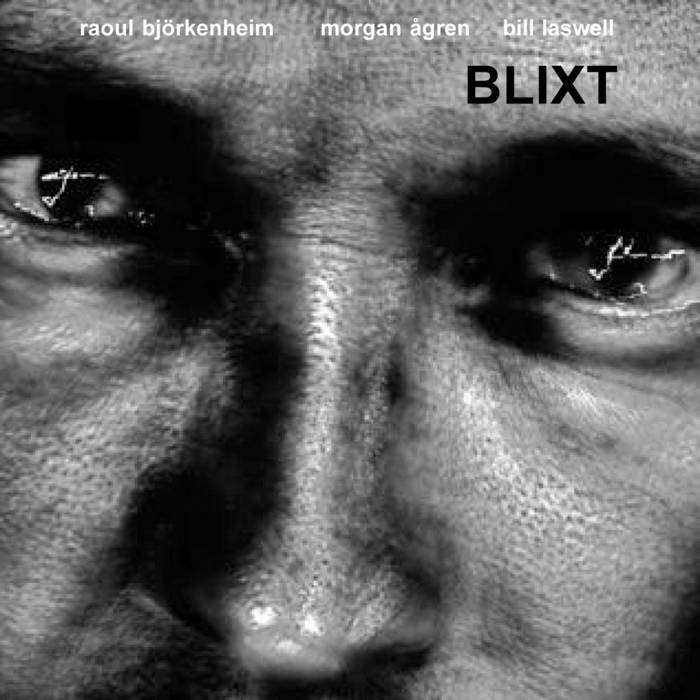 "...it’s beautifully brutal and scintillatingly snarling, an arctic blast of synapse-cleaning, focused, furious racket with some capricious serenity here n’ there. The players: An American-raised Finnish guitarist; a jack-of- all-trades American bassist/producer, and a Swedish prog-rock/jazz fusion drummer so good Frank Zappa asked him to join him for a Swedish tour, respectively. Björkenheim has a fever- ish, bittersweet tone with some judicious sustain (evoking John McLaughlin and late-period Jimi Hendrix); Ågren rumbles and rages with subtle flair, and Laswell’s lithe, rubbery throb is the glue holding it together. Blixt is a zone where jazz erudition, punk/metal aggression, and intuitive free improvisation come together with the harmoniousness of a honey badger honeymoon." – Icon

Blixt is the first release by a phenomenal new power trio of three seasoned, world class musicians. Their music touches on many aspects of the most creative history of the power trio in rock music; the unbelievable sounds wrested from normal instruments that the Jimi Hendrix Experience gave to the world, the singular freedom used by Guru Guru and the grafting of together of rock, progressive, jazz and punk that was pioneered by Massacre (and the group in which Bill pretty much began his career). If Cream was the first guitar-led supergroup, Blixt is its present-day aftershock. Five decades on, the sound is heavier and darker, the mix of ingredients more transgressive, the origins of the musicians more global, and the harmonic and rhythmic palettes more complex. But at the core of both Cream and Blixt is an unholy marriage of rock and jazz, riffs and improv, the viscera and the cerebrum. And both bands, at their most confrontational, can peel the ears clean off your head.

The three players contribute really nice, simple and powerful heads that the band use as a springboard for their powerful improvisations around the themes. Recorded almost completely live in the studio, the emphasis is on the spontaneity and great musicianship of the players.

Guitarist Raoul Björkenheim emerged from Finland in the 1980s with Edward Vesala, started his own group Krakatau who recorded two self-released albums and then recorded two more albums for ECM. We're long-time supporters of his work, having worked with Raoul on Cuneiform for over 15 years. As anyone who has ever seen him perform can tell you, Raoul is a seriously major – if under-appreciated – guitar hero. Most recently, he has kept an active profile with Scorch Trio, with whom he has released 4 albums.

Bassist Bill Laswell has been a major figure in creative music for 3 decades as a performer as well as a producer. Emerging as one of the earliest figures in the unbelievably creative 'downtown' sound movement in the late 70s, he produced early 'punk/jazz' classics with Curlew, Material and the aforementioned Massacre. The list of major names in jazz and rock he has worked with since that time is voluminous; his productions and/or the releases he has appeared on have sold millions of copies and some have directly changed the face of popular music. His stamp is on literally hundreds of albums, the majority of them characterized by a sound fusing the energy of punk with the bone-rattling rhythms of dub and funk.

Drummer Morgan Ågren was voted the #1 best fusion drummer in the Modern Drummer Readers Poll of 2010! A Grammy Award-winning musician on both sides of the Atlantic for his work with Zappa's Universe, He's one of the most amazing drummers out there today; and there are a lot them vying for that title!. He has worked with keyboardist Mats Öberg as Mats/Morgan for over 30 years (since he was 14 and Mats was 10!) and together they have released 8 albums.