by Chris McGregor's Brotherhood Of Breath 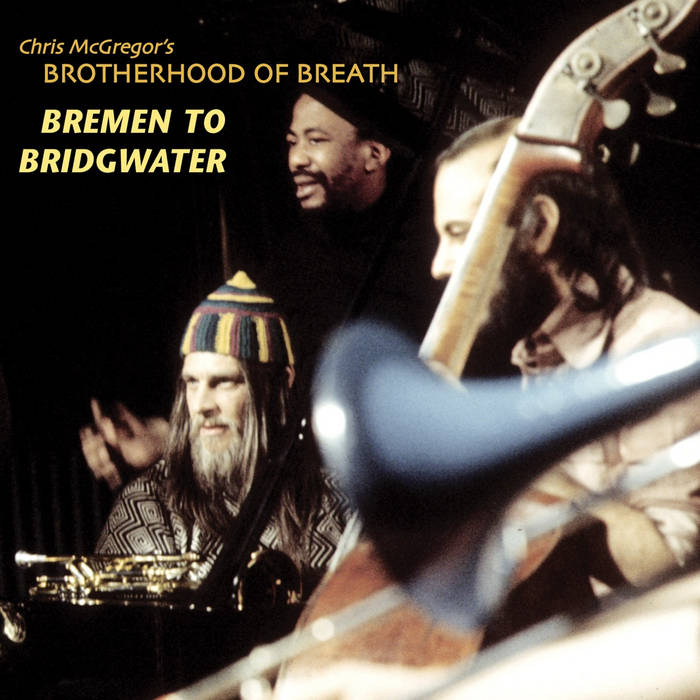 This release, Bremen to Bridgewater, contains two albums worth of previously unreleased live recordings made in Germany and England during two very different periods of the band’s career. The German radio recordings were made on June 20th, 1971 at Lila Eule (Lilac Owl), a well known jazz club in Bremen. The English recordings were made at the Bridgewater Arts Center, during two tours that the band made with different lineups in February and November of 1975, and feature some of the very last recordings of trumpeter Mongezi Feza, who died in December of that year.

"...a galaxy of talent, all playing with such ferocity and commitment."
- The Wire

"Cuneiform's recent issue of several previously unreleased live recordings from the 1970s editions of the Chris McGregor big band (commencing with the brilliant Travelling Somewhere) has stirred up some powerful memories, especially among Brits and Europeans old enough to have seen the group live. More to the point, it has also served to introduce a whole new generation of jazz fans to the unique qualities of the Brotherhood, which was made up of a multi-racial assortment of South African expats who combined African hi-life, kwela, and township jive with both traditional and avant-garde American big band jazz.

Beyond that, the special significance of the group in Great Britain was related to its arrival from South Africa at a time of great musical ferment, when young British (and European) players were absorbing the lessons of American jazz innovators such as John Coltrane, Ornette Coleman, Albert Ayler, and Sun Ra. McGregor's fearless, high-energy band almost immediately attracted the best and brightest of England's young players, with Elton Dean, Nick Evans, Mike Osborne, Evan Parker, Gary Windo, and John Surman all group members at one time or another.

The band's economic struggles were chronic and often severe, and it
was severely under-recorded during its sporadic history, but in retrospect, the group's combination of African modalities, British energy, and American jazz tradition gave it a sound that was unparalleled in jazz history.

This double-disc set of recordings actually includes three separate dates: a June 1971 session in Breman, Germany, a piece of a February 1975 concern at the Arts Centre in Bridgewater, England, and a full concert eight months later in November 1975, again at the Bridgewater Arts Centre. Granted, the sound is not exactly of audiophile quality; McGregor's piano, as well as Harry Miller's excellent acoustic bass, are sometimes lost in the mix, and solos are occasionally off-mike. However, this band is all about kinetic energy and interaction rather than sonic purity, so the lackluster sound should be no real obstacle to enjoyment.

As always, McGregor's core group (who played initially as The Blue Notes) distinguish themselves in particular. Drummer Louis Moholo can pick up the entire band at will, and push it in whatever direction he wishes. (Just listen to his marvelously propulsive work on "Sonia," which opens the second disc.) Moholo is the ultimate big band funk machine. And the wild blasts and nimble execution of Mongezi Feza on trumpet and Dudu Pukwana on alto sax still rival anything that emerged from the 1960s American free jazz movement.

As for the stylistic difference between the 1971 and 1975 dates, the earlier group is sometimes more conventionally Ellingtonian (or perhaps Basie-ish), displaying some very nice ensemble work on pieces such as "Now" and "Andromeda." However, another version of "Now" from the second 1975 concert suggests that the later group may have been more interested in getting beyond the charts and into spontaneous exchanges, drawing off each other's energy and pushing the sonic envelope. In fact, one occasional criticism of the band's later incarnations was a seeming reluctance to get to the point. Pieces were frequently 15 minutes or longer, and the music had a jam band quality much like The Grateful Dead live (if you could imagine the Dead playing avant garde African township jazz).

It's perhaps true that on the 1975 recordings, the journey is more important than the destination -- just as it is in live performances by the typical African dance band, where concerts are rarely less than four or five hours long. But the differences between the two discs shouldn't be exaggerated, as the fierce, joyous collective energy is a common denominator throughout. Music from all three concerts should cause not only the toes to tap but also the feet to stomp. On evidence of these recordings, the Brotherhood of Breath is a band that many listeners will still be happy to journey with for however long the journey takes." – William Tilland / AllMusic

Edited and mastered by Michael King.