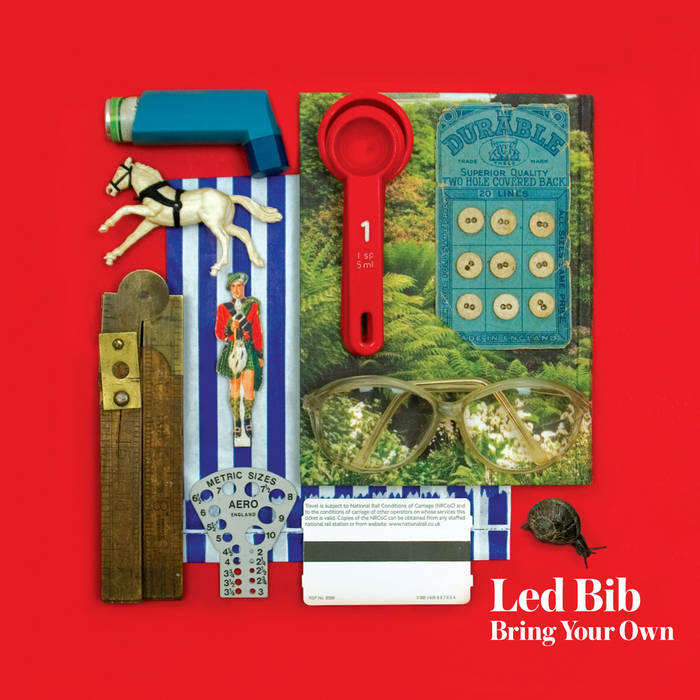 "Jazz and punk rock got in a fight, made up, got married and had an offspring named Led Bib. [Led Bib] dont make jazz, they don't make rock and they don't make fusion. This hunk of amalgamate called Bring Your Own–with its bits of jazz, rock, fusion, funk, punk and metal–is everything at once.... Bring Your Own contains not an iota of swing, but it retains the essence of jazz: It is largely improvised and it invigorates the soul." – JazzTimes

"This is the sound of a band having fun… like a hot chainsaw through butter." – The Wire

"One of the UK’s most adventurous groups" – Jazzwise

" …a masterpiece of musical foreboding" – The Metro

A tremendously popular act at home in the UK, their last album, Sensible Shoes (their first with Cuneiform) was a 2009 'Album of the Year' winner with the prestigious Mercury Prize. They regularly play large-scale festivals and concert halls in the UK as well as festivals and shows elsewhere in Europe. So, in the wake of the huge press attention lavished on them due to the Mercury, and having appeared on UK's Channel 4 News, performing their version of the theme music to literally millions in front of the telly, did the mighty Bib decide to tone it down? Turn it back a notch? Definitely not. If anything, Bring Your Own contains some of their hardest rocking material to date, mixing the full throated cry of the dual saxes over loudly amplified Fender Rhodes and heavy bass and drums.

Those familiar with the Led Bib sound will recognize the trademark hooky melodies and idiosyncratic improvisation on this album. The raw energy and style remains, but it has never sounded so confident or accomplished, so genre-crossing and definition-defying. Here eastern melodies tumble into rock and roll grooves, there jazz phrases open up pastoral overtures, and elsewhere crescendos rise and disappear into whirring kraut-rock wormholes. The group has been playing together for over 7 years – and it shows. There’s an electricity here, a ‘group mind’ built out of a confidence in each of the member’s playing that means risks can be taken and their unique sound world cracked open and reassembled time and time again. The band has come a long way from their humble beginnings as Holub’s college music project!

Led Bib were formed in 2003 and have had the same formation since their beginnings; Mark Holub, drums; Liran Donin, bass; Toby McLaren, Rhodes and Chris Williams and Pete Grogan, alto sax.