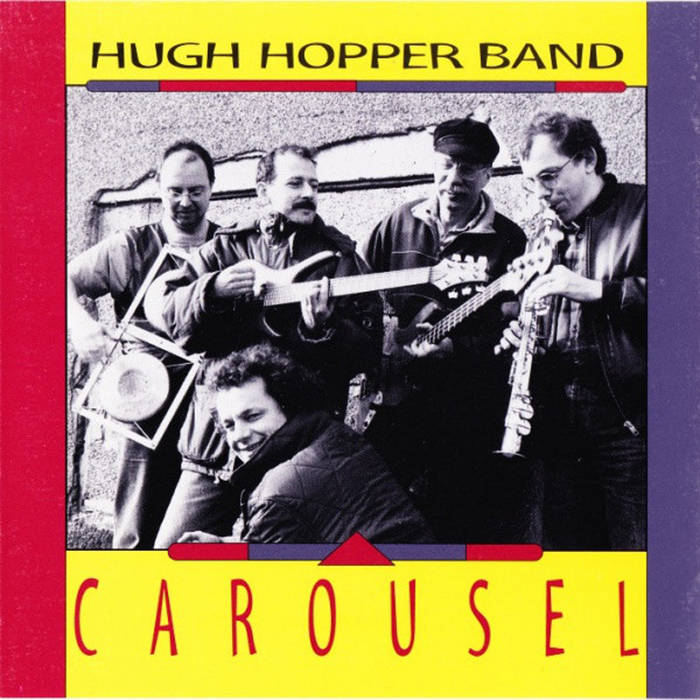 PDD Thanks to Bandcamp and Cuneiform for helping me discover another hidden (at least to me) Hugh Hopper classic. The music sounds just as fresh and vital as I am sure it did 27 years ago. Favorite track: Sinister Toilet.

After a decade of work together, several live albums, many concert tours, and lots of satisfied listeners, we finally got Hugh and crew into a studio to record Carousel, certainly their best yet. After all this time together, the band is really a WORKING unit, with fine playing from all members. This is a powerful set of fusion and beyond from a creative, hard playing outfit. A disc good enough that it might even give fusion back it's good name!

"[Carousel is ] a solid and convincing record, with many of the old Soft Machine qualities of compositional interest and high standard of performance in evidence. Enjoyable and consistant"
– Chris Cutler

"The Hugh Hopper Band has been the ex-Soft Machine bassist's most fusion-oriented outfit of the 1990s. Carousel was the band's second release for the Cuneiform label ...and their first and only studio venture.

The album opens with a very straightforward number, "Shuffle Demons," maybe Hopper's most mainstream composition ever. The reggae feel of "Sinister Toilet" pursues in the same positive direction.

Guitarist Patrice Meyer contributes one of the most interesting pieces, "Carousel": out of chaos rises a cyclic riff sped up and constantly transposed into a higher register, giving the impression of a carousel turning faster and faster. Things get freer and darker on two collective improvisations, but the overall feeling of the album is best epitomized by "Lock, Stock and Barrel": it starts on an almost fanfare-like theme that eventually leaves to make room for a swinging tune with Caribbean overtones and an inspired solo by guest trombonist Robert Jarvis.

Carousel is a "feel-good" fusion album. Nothing is very complicated, the licks stay catchy, but the result lacks the intensity found in Hopper-era Soft Machine or the bassist's later project Hughscore. It might be Hopper's most accessible release."
– François Couture / AllMusic