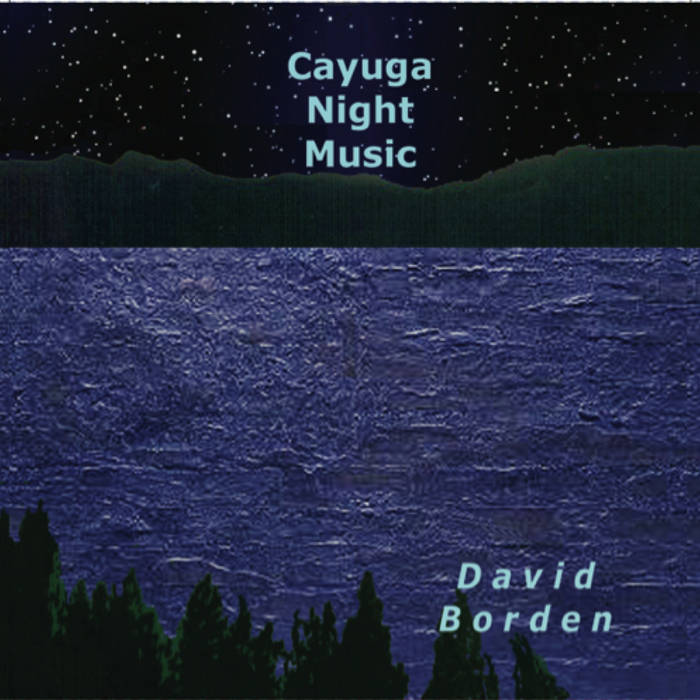 Lunarsight I think I was able to follow the jogging path that inspired the album somewhat using Google Street view. The music does feel like a soundtrack for the terrain.

PDD The music is simply beautiful. Favorite track: The Coming Of Winter.

I got the idea for these pieces after several years of running at night along the railroad tracks that follow the east shore of Cayuga Lake. I simply walked across the street from where I lived, at 1191 East Shore Drive, and ran north. In less than half a mile I was in deserted, barely accessible terrain. On the west is the lake and West Hill. Directly to the east are sheer, moderately high cliffs which now and then give way to rolling hills, gorges, and a few summer cottages. This was during the 1980s and in the early morning hours there was a sense of isolation and wonder.

My favorite time to run was between 2:00 and 3:00 am; I did it in all seasons and weather conditions. I sense that this ideal state of affairs is ending as the Ithaca-Lansing area is becoming over- developed; more and more docks appear, a marina, and homes closer to the lake’s edge and along the top of the cliffs. Already more than one of my favorite meditation spots has disappeared as trees are cut down and brush is cleared away. It’s fortunate for me that these pieces were composed before my inspirational scenes became too cluttered with man-made objects or disappeared altogether.

THE COMING OF WINTER
Along the lake, winter usually starts during the first week in November. From mid-September through October the inevitable changes take place. Leaves fall, most birds leave, vacationers take their boats out of the water and insects become quiet except for a few crickets that prevail until late October. Finally the smell of wood smoke returns and I can see my breath as I run. The terrain is mine again, as city people lock up their summer cottages. The first snowfall assures me that things will be wonderfully quiet and chilly for months to come.

LAKE ICE
Toward the end of winter, when there is still no plant life except for the pines, and no sounds of insects, large snow-dusted chunks of ice idle in the lake and thousands of smaller chips undulating in the wind-tossed water make a high soft clatter near the shore. Every once in a while I stop running to listen to the ice chips and watch the white rafts float wherever the wind carries them. The starlight, moonlight and distant city light reflected from the clouds combine to give each patch a color profile all its own. Occasionally a Canada goose shouts its approval.

SNOW GORGE WITH FULL MOON
I usually run north for two and one half miles, rest for a short time, or meditate. If I have only rested, I run the return route south for a mile, and then meditate at this small, exquisitely beautiful gorge. Unless it’s the middle of summer, there’s usually a moderate trickle of water flowing down. In winter, a small amount of water is usually flowing under the frozen cascades. From December through March, snow collects on the frozen mantle. Sometime in March, the full moon lines up with the gorge (I have to check the moon rise times) and presents one of the most trance-inducing sights I’ve ever witnessed. When this happens, I don’t meditate, but simply stare for a long time, until the earth’s rotation moves me and the gorge away from the moon; then I continue my run homeward.

FIREFLIES
The third week of June around the summer solstice is the best time to see fireflies on the lake. After running twenty minutes or so, there is a slight curve, then a segment of track about forty yards long; on each side, a border of trees and bushes. I was startled one night to arrive inside this corridor suddenly surrounded by hundreds of fireflies, each pulsing off and on at different rates and intensities. At the end of this segment of track I sat down and watched the light show for about half an hour. I did this every night for a week, then the population of fireflies thinned out and continued to do so for weeks. It became my annual private light show. This piece is dedicated to my late friend, the renowned entomologist and “father of chemical ecology” Tom Eisner.

NORTHERN LIGHTS
Spring and Fall seem to be the best seasons for this phenomenon.
Although these lights in the sky do occur in the Finger Lakes area, they are not a common sight. The first thing I notice is a black, eerie, electric curtain that cloaks the northern end of the lake horizon; midway in the sky above are various colors that reach toward the apex of the sky. The colors vary from electric shades of yellow-green to blue mixed with red. When the curtain begins to dissipate, stars are visible behind transparent windows of color. The border between the black curtain and the colors resembles millions of undulating bristles. It all fades gradually back into the night; some kind of cosmic smoke.

CRICKET DREAMS
Towards the end of fall, most insects fall silent except for the crickets whose numbers keep dwindling until there are only a few left. One year, there was one lone cricket left, making sounds at a particular junction on my jogging trail near Myer’s Point. This was surprising because it was starting to get really cold. Nonetheless, this lone cricket persisted. It wasn’t until the end of the first week in November that the sometimes tentative cricket sounds stopped. This poignant sound has remained with me ever since. I still wonder whether it was the persistence of consciousness or resistance to the coming long winter sleep that kept this life form producing its natural sounds.

MIST VISIONS
One night in late October, the temperature dropped twenty degrees. The moon was almost full and I could see my breath for the first time in months. I decided to take a walk instead of run because my knee was bothering me. The first thing I noticed was how silent it was because the dip in temperature had silenced the insects. Then I saw what seemed like smoke toward the middle of the lake. The cooler air coming in contact with the warmer water was causing
condensation, releasing the vapor into the night air. As I continued walking north, the mist continued to rise a little higher with the passing minutes; this appeared to happen only at the lake’s midpoint along a continuous line in a north-south direction. Over a period of an hour the mist changed slowly but dramatically to suggest different ghostly, slowly moving shapes, enhanced by the bright light from the moon. At first it looked like a small amount, then like a grayish-white bank of flames in slow motion. As the flames grew higher, angel-like figures emerged every twenty feet or so, eventually spouting undulating white wings of various sizes. Then, the angels slowly merged into a hazy, semi-transparent tree line on the water. I suppose it stayed like that for hours. I went home to bed with beautiful visions in my head.

FOG, STARS, TRAIN, WEST HILL LIGHTS
During the early morning hours, gazing across the lake, there are countless lights of different colors and intensities; some steady, some flashing. Above all, the lake is always present, reflecting the lights across two miles of water and extending out of sight, northward for forty miles. Sometimes it’s so foggy the lake is barely visible, and there are no lights to be seen, just the fuzzy whites and greys of the fog itself. Once in spring, the fog was very thick, but lifting. It made the lights from the hospital into a hazy, other worldly presence. While I was staring at it, a truck stopped suddenly above me on the slope, and I could hear the driver get out; he didn’t leave until the fog lifted and things looked normal again. Once, on my return trip, running, a bright spiral suddenly unfolded in the sky and dissolved into glowing smoke. It turned out to be a satellite burning ejected fuel before re-entry. On another occasion, over West Hill, an intensely white glowing round object one tenth the size of the moon suddenly appeared out of nowhere and except for a brief rush of air, silently traversed the sky southward surely going thousands of miles an hour before abruptly turning southwest and disappearing over the horizon. The next day’s newspaper reported a meteor instead of a flying saucer. Then there are the shooting stars, the distant street lights, ambulances, cars, buoys, occasional yachts, airplanes, the usual thousands of stars, and the moon throwing a gentle golden spotlight on the lake before the earth’s rotation affects a scene change. Once in a while, the train appears, projecting its bright searchlight into the mix. In this last piece of the series as in the first one, the running is musically audible. Just listen.