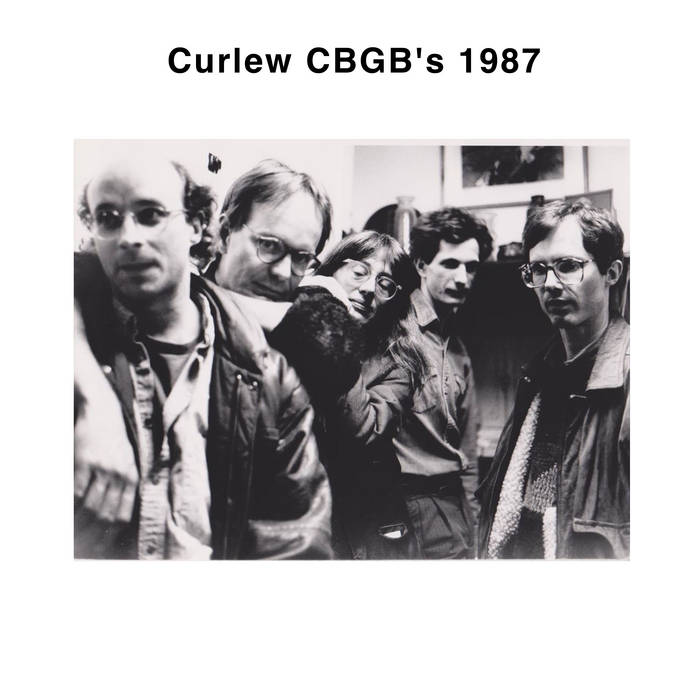 This was recorded around the time I saw Curlew for the first time, just after we released “Live In Berlin”. I love this show because it brings back some of the awe of what they were doing at that time. All you need to do is listen to the first song, Ray, (their opener for years) and the incredible solos (and the incredible whooping from the audience at said solos) and YOU TOO will know.

I had done the math, ok but I thought I should check my figures. I consulted my pal Rick Brown (of 75 Dollar bill, Two Mule Team, Big Feet, and more) and asked him how many gigs were done at CBGB’s in any given week.  Rick said: “When I was first going there in late '75 it'd be two bands a night, alternating sets. So I guess 20 to 30 sets a week. As things got crazier they'd have 5, 6, or 7 bands a night so more like 45 or more sets.”

With sound checks it adds up to a figure of 90. If a set was one hour and a soundcheck (good lord) could be, let’s say one hour then that’s 90 hours in a week. Plus all the whatever others that took place divided by 24 equals nearly four days. Total days. Four total days out of a week.

At one of the first Curlew gigs there Rick and Sue Garner were standing at the left. As I walked up to get on the stage Rick looked at me, smiled, no, no, he grinned, looked at me, and said these fateful words: “Have fun.”

Curlew gigs there were always packed, with Tom Cora inventing the truly modern cello, Ann Rupel hurling the bass like never before, Pippin Barnett drumming from one of the more esoteric surrealist places, Davey Williams inventing the guitar again and again, and I played sax, hung around on stage and hoped for the best.

...and for those following along:

RAY: Named after author Barry Hannah's book "Ray" and coincidentally later is the name of my son Ray.

KISSING GOODBYE: Came to me as a slightly sad winter day.

TO THE SUMMER IN OUR HEARTS; Yeah, down there on the left or right, depending on your angle of view...

MOONLAKE: Named after the actual lake which is a 2,300 acre oxbow lake located outside the mainline Mississippi River levee about 15 miles north of Clarksdale, MS, and close to Lula, Rich, Birdie, Darling, Rudyard, Belen, Clover hill, STOVALL (Muddy Waters' 'Down on Stovell's Plantation) and Bobo

ONE FRIED EGG: The title refers to to Davey’s ground breaking, startling and shocking book: ”Which Came First: The Fried Chicken or The Fried Egg? Now The Story Can be Told.”

THE HARDWOOD: I wanted to choose a wood and couldn’t decide.

OKLAHOMA: Refers to an unpleasant football drill we did in High School.

AGITAR / THE VICTIM: Agitar is Spanish for the verb Shake while the The Victim is named for the countable and uncountable ones. Co-written with Rick Brown (see before) and guitarist and composer Mark Howell.

MINK'S DREAM: Refers to the Mink Snopes character in William Faulkner’s Trilogy: startling "The Hamlet" "The Town" and "The Mansion"

I don't know how George Cartwright got my number, but he called me up and introduced himself and wanted to send me a cassette of a proposed album of his band, Curlew, playing live in Berlin, and George is such a charmer of a person, I really enjoyed talking to him.

so, the cassette arrives and it's really good, but I also have to admit that a lot of it is kinda beyond my understanding at that point (1986). I can tell that the band can PLAY and I can tell that some of the tunes are great, but the solos seem a bit wild for my tender young ears and I just don’t really understand the entirety of what makes them THEM.

But one thing I always prided myself on with the label - even very early - was that I liked to push myself and I had talked to George on the phone a few more times and I was positive now that I really liked George and I claimed to be a 'new music label' and ‘new’ means pushing yourself beyond what you already know, right?

so I said, “SURE George! I’d be happy to release your record!” And the record came out and I came up to see the band play at the then rather new and at that point not-yet-iconic Knitting Factory in the lower East side of Manhattan.

and the Knit is cool and funky and fun and the hype about the Knit hadn't gotten quite so loud that early; it was just a cool, fun place! The show starts and the band is playing and I am enjoying myself, even though what they are doing is STILL somewhat beyond me.

3rd or 4th song into the set. The Hardwood. Tom has finished his solo and Ann is doing the low zooooop stuff with Pippin and George and Davey before George takes the tenor solo. And she is shaking her head (watch any video of her playing) and playing REALLY low and everything and everyone is COOKING!

[I told Ann this story, and she told me, “For The Hardwood, I turned my low E string down - now I don’t remember if it was to D, C or B - B was the lowest that was any good - but when a tune was in D, C or B *and* seemed to call for a really low root, I would tune the E down to that tune’s root…”]

A light bulb suddenly blows up over my head, just like in the comics, and I IMMEDIATELY and TOTALLY GET IT! I GET EVERYTHING about this band, and I find myself applauding and yelling and cheering!

And I remember thinking, "Jesus fucking Christ - somehow you backed into signing the best fucking live band in the country".