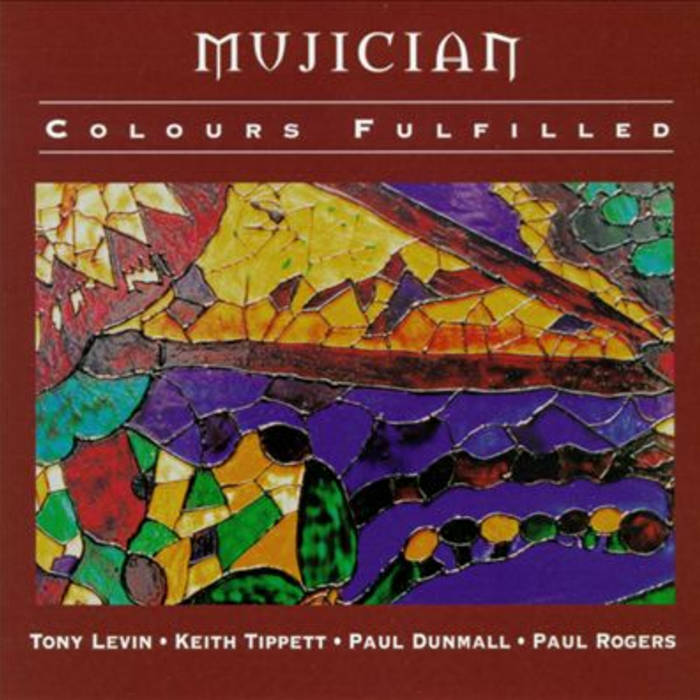 The improvising quartet Mujician was formed in 1988 and remained an ensemble until Tony Levin's death in 2011.

Mujician's members were Paul Dunmall (reeds), Tony Levin (percussion), Paul Rogers (bass), and Keith Tippett (piano).
Dunmall was classically trained on clarinet. Levin (not the King Crimson member) studied drums and jazz from age 13 and became a professional at 17. Rogers is self-taught. Tippett may be known known for his 50-piece ensemble, Centipede, and for being a studio member of King Crimson from 1970 through 1972.

Produced by Evan Parker, Colours Fulfilled was their fourth release. As Option said about their last release, "If you want to know where free-jazz is at these days, check this one out." While still obviously "free", this is one of their most overtly "jazz" releases, & it swings like mad!

"Mujician's music works because the group's four very forceful musical personalities don't get in each other's way. For all their differences, their strengths seem complimentary - Keith Tippett's massive, lumpish piano chords; Paul Dunmall's brutal, rough-hewn sax lines; the gravity of Paul Roger's bass playing; and the stony clarity of Tony Levin's percussion. The album begins and ends with Dunmall on bagpipes, two powerful performances which underline just how distinctive this group sounds. Elsewhere the music picks up where 1996's excellent Birdman left off, exemplifying the uncompromising charms of the tradition which it extends." - The Wire

"Mujician's fourth CD represents their first studio date without a live audience. Perhaps as a result of the studio environment, the dynamics range is perhaps a little more moderate on this release, without quite as many of the dramatic shifts in intensity which characterized previous efforts like Birdman and Poem About the Hero.
For the most part, this is a high-energy date, with group members going full tilt on large portions of the four tracks and drummer Tony Levin getting a chance to really strut his stuff as he lays down a constant polyrhythmic barrage worthy of Elvin Jones at his most volatile. Reed player Paul Dunmall introduces a new (old) instrument on several tracks -- bagpipes. He doesn't really solo on them, but he uses them to create a highly effective blanket of instrumental color and texture. Elsewhere, Dunmall is consistently and typically impassioned on soprano and tenor saxes and occasional clarinet. He's a musician who can wail convincingly without abandoning his intellect. "Part 3" revisits the energy music of the late Coltrane quartet, and yet maintains the unique Mujician personality, with a sensibility that is somewhat more playful, and less reverent, than Coltrane's. Keyboard artist Keith Tippett plays piano strings on "Part 4" behind Dunmall's bagpipes, suggesting a skewed world music orientation which perhaps represents new possibilities for Mujician. As usual, group members are almost prescient in their knowledge of each other's moves, and even though very little on this date is scripted, there is always an impression of common purpose.
Simply put, this is spontaneous, interactive jazz at its best." – Bill Tilland / AllMusic Guide