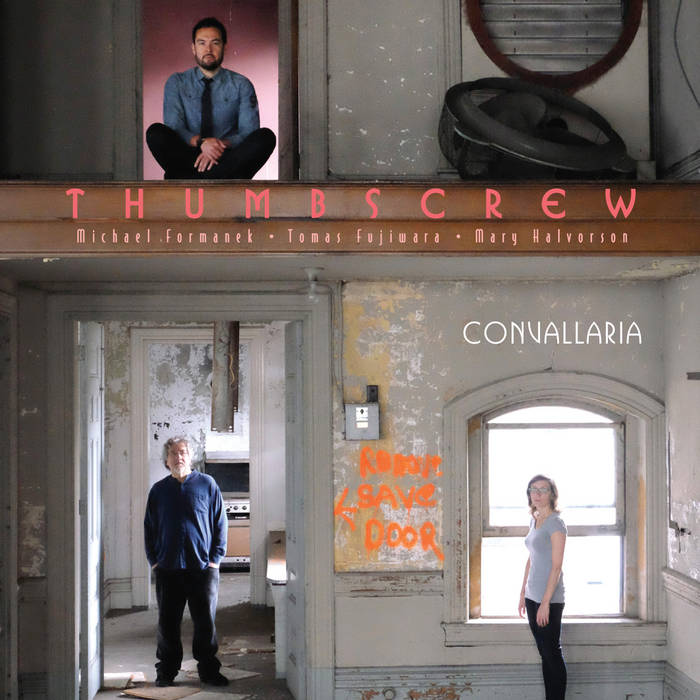 “The barrage of riffs are both epic and melodic, the low end beefy and the percussion massive. Expect nothing less than magic from these three avant purveyors.”
– The Village Voice

“... all three of these musicians have a well-established history of creating unconventional music. That trend doesn’t end here, but as challenging as this music is, it’s presented in a way easy to accept.”
– Wondering Sound

Creative artists aren’t subject to state persecution in the United States, but indifference can exact its own cost, just as generous support can pay steep dividends. Thumbscrew spent two weeks honing the tunes on Convallaria at City of Asylum, a residency program in Pittsburgh, and for Thumbscrew the opportunity for intensive, undistracted work and woodshedding yielded a particularly striking body of music.

Already closely bonded by extensive collaborations in a variety of overlapping ensembles, the powerhouse triumvirate got to spend the kind of concentrated time together that’s “almost unheard of these days,” says Formanek. “I’ve done some composition residencies working on my own. But we were all there together, working on music every day, trying things out. I miss that from my younger days.”

“It was amazing,” agrees Halvorson. “Everyone’s so busy. Even with my own band it can be like pulling teeth to get one rehearsal together. For two weeks we played every day and worked on all the new music. It really helped us to take the band to the next level.”

Convallaria is the work of a true collective with all three players contributing compositions and taking equal responsibility for shaping the music’s flow. While exploring an array of improvisational spaces, the band has honed a sinewy sound marked by transparent textures and astringent rhythms. It’s music that pushes outward and snaps back into unexpectedly altered forms.