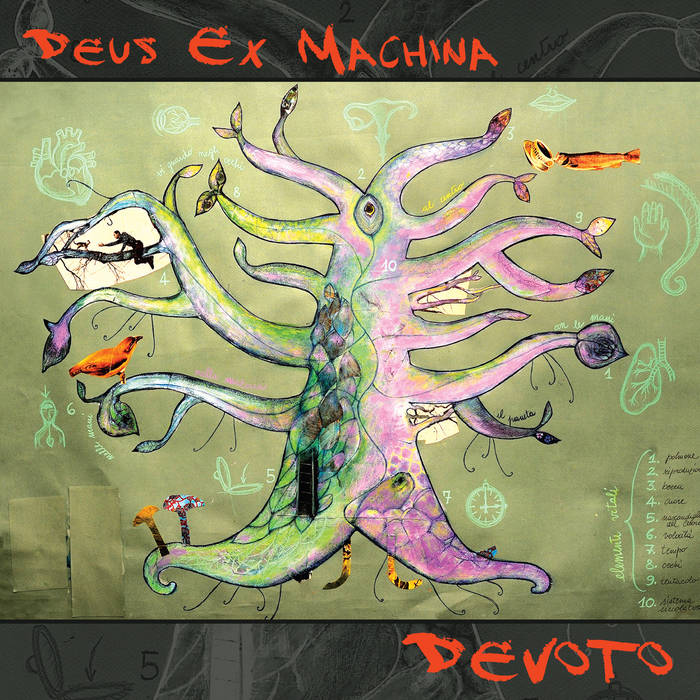 “...lyrical, provoking and genre-pushing...one of the most extraordinary bands in the entire music universe.”
– AllMusic

“Extremely tight, lots of texture and dynamic shifts and flawless acrobatic vocals...by one of the genre's best...”
– Icon

“Everyone in Deus Ex Machina is a virtuoso.”
– AllAboutJazz

Following an eight-year absence, the Italian rock/progressive group Deus Ex Machina bursts back onto the international scene with Devoto. Blazing into contemporary focus with Devoto, Deus Ex Machina is poised to transcend the accomplishments of its past.

"After Imparis [their 2008 live/studio release], we faced a lack of energy," explains Alberto Piras, one of progressive music's most original and exhilarating vocalists. "We needed to understand where we wanted to go and whether we would be capable of continuing to make DEM music. The recording of Devoto was quite quick, but was the result of a very long, thoughtful process. Our idea was to test different ground than we had before; still being DEM, but with a more straightforward, simple musical language in the context of dense and relevant compositions." Piras continues, "This is what we think rock is about: its simplicity, but also its expressive richness. We tried to compose 'easier' songs, still full of emotion and intensity. We want our fans to feel our blood flowing on this record, which is somewhat in contrast to a tradition that describes us as 'brainy and difficult'. So we wrote and played our songs more from our guts than from our heads."

Devoto may have been a long time coming, but it's been more than worth the wait. Deus Ex Machina continues to prepare even more new material while rehearsing for upcoming live dates. Prepare yourself to revel in the gripping punch and the more direct - yet still compositionally dense and intense - music of Devoto; like every album in its remarkable career, both a consolidation of what has come before...and a clear signpost of things to come.

All songs written by the duo Albauro Colliras (Alberto Piras and Mauro Collina), aided by the arranger Luigi Savino.

Front cover by Chiara Renda.
Photos by ziaMildred and Leo.

Recorded at the Arrigo's and Saving’s studios between the end of the winter and the end of autumn 2015 with the best musical instruments made in the world until 1975, provided by Scolopendra (www.scolopendra.it).