Distractions on the Way to the King's Party 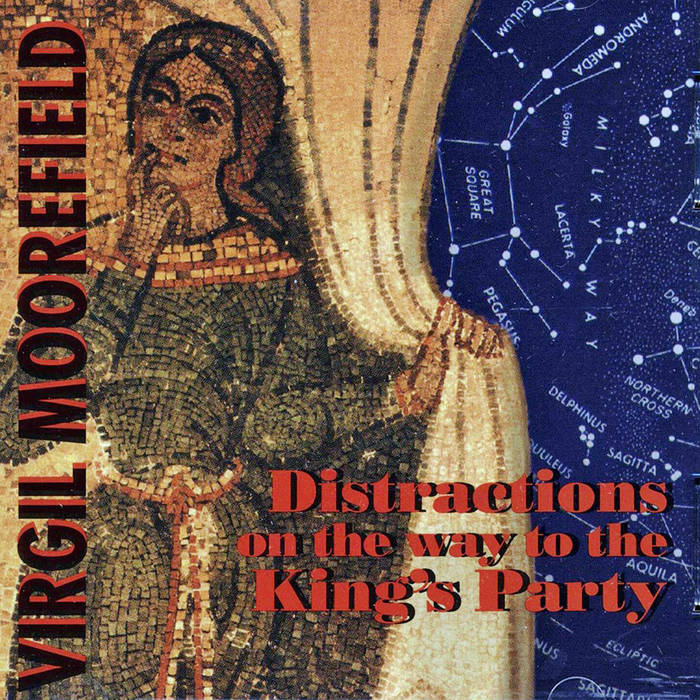 Might the monarch mentioned in the album's title be wearing a Crimson robe? That's at least one facet of this album, sometimes sounding somewhat like the 80s (instrumental) Crimson with a horn section. Frank Zappa's rockier bigband-like outfits might be a reference point in other places...

Anyways, when an album makes me think of Crimson and/or Zappa, it can't be bad, right? ;-)

Drummer/composer Moorefield leads his 9 piece ensemble (three guitars, trumpet, trombone, alto and tenor saxes, bass and drums) through a set of brilliantly written instrumental art-rock. This is forward-looking, innovative music by an avant big band that rocks and swings. Moorefield has an exceedingly varied resumé, playing with everyone from hardcore bands to symphony orchestras, as well as Glenn Branca and Swans.

"...an all too rare blast of fresh air. The label-defying music heard [here] is thick with surprising insights and enthralling musicianship."
- Frank-John Hadley/Downbeat writer.

"Drummer/composer Virgil Moorefield delivered one of his best efforts with Distractions on the Way to The King's Party. Here he leads a tight nine-piece brass/guitar/drums ensemble playing hot avant prog/funk fusion tunes. Contemporary classical techniques are applied to funk rock, complex avant prog motifs are tied to burning brass accompaniment. The music often remains very accessible and easy to tap your foot to, even when reaching high levels of complexity. The energy displayed is contagious and turns Distractions on the Way to The King's Party into a surprisingly danceable avant garde/big band set. Recommended."
-AllMusic