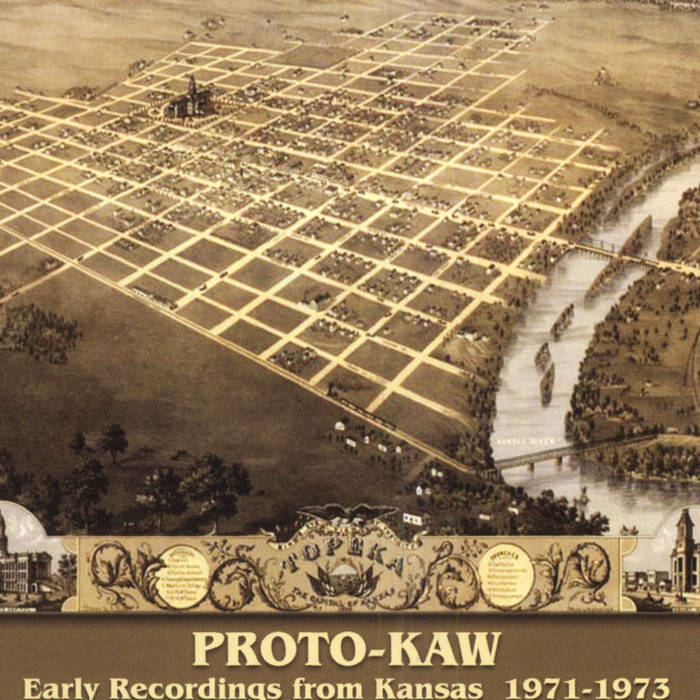 Carsten Pieper In fact, I never really got into the music of Kansas very much, but this really is a great find (triggered by a special Cuneiform Records weekend offer, thanks a lot!). The Crimson King visiting the Midwestern plains, so to speak. Or ELP in a barn or whatever. By all means, give this a try if early 70s prog is your thing, :-) Favorite track: Greek Structure Sunbeam.

rjmarrone These tracks are simply fantastic. The American VdGG. Don’t get me wrong, I love Kansas but this is truly something special. I’d love to hear what this version of the band accomplished in the parallel universe where they were successful.

This album compiles and releases for the very first time all of the studio recordings (as well as two live recordings) made by guitarist and composer Kerry Livgren with the 2nd edition of Kansas, a seven-piece band that immediately preceded the formation of the lineup of the band that the world knows as Kansas.

These recordings present a different and fascinating contrast to the music that Kerry would develop and release upon the world with Kansas just a couple of years later. Yet, as composer of all the tracks here, they still have his obvious imprint. In fact, two of the songs here would later reappear in different versions on Kansas' albums; Belexes would show up on the band's self-titled debut album, while Incomudro would appear on their 2nd album, Song For America.

With dual keyboards (one of whom doubled on reeds) and an electric saxist/flautist featured in addition to the more standard rock instrumentation, the sound is obviously influenced by jazz/rock pioneers as well as early progressive rock bands such as Van Der Graaf Generator and King Crimson. Early Recordings From Kansas 1971-73 is an exciting archival release of dark and exploratory early American progressive rock. The fact that these musicians were not able to find success while making this adventurous music in the heartland of agricultural America over 30 years ago should not be a surprise, but the fact that the tapes have survived and are able to finally be presented to the world in an authorized form will give fans of Kansas as well as all fans of early progressive rock a very pleasant surprise.

These recordings have been licensed from, and released with the full consent and agreement of all the musicians. Kerry Livgren has returned to the original tapes and worked on all tracks in his studio to present this material in the best possible light.

"This collection ought to be cross-listed under Kansas, as it consists of recordings made by early versions of the latter band, as members -- most notably guitarist Kerry Livgren -- drifted in and out of the lineup of the group carrying that name and a related band called White Clover. Given the fact that they didn't even have a major-label contract, or the prospect for one at the time that this material was recorded, it all sounds astonishing polished and accomplished, and resounds with the boldness that comes with youthful confidence -- the bandmembers' reach may have exceeded their grasp when it came to presenting extended progressive rock-style suites such as "Nactolos 21," but their musicianship was such that it could just about carry the 11 minutes and change that it runs. Dan Wright's rippling keyboards, John Bolton's sax lines and lilting flute passages, and Rod Mikinski's bass are all outstanding features -- echoes of Soft Machine, early-'70s King Crimson, and other iconic progressive bands abound, but these musicians do succeed in putting their own stamp on the best of what's here, which is fully two-thirds of the contents. "Totus Nemesis" goes a little over the edge, if not exactly the deep end, but even there the virtuosity is intriguing. And the following track, an achingly lyrical exercise in balladry called "Greek Structure Sunbeam" (sort of this band's answer to "Cadence and Cascade" by King Crimson), more than makes up for the excesses. "Cyclopy," by contrast, sounds heavily influenced by Emerson, Lake & Palmer off of their first album, mixing a self-consciously heavy organ intro with a boogie-driven middle section that recalls the more rocking parts of ELP's adaptation of Pictures at an Exhibition. It's astonishing to think that those involved were making music like this in the middle of the American heartland -- it all sounds so Central European -- and even more so that they managed to survive in any form long enough to create the final, successful incarnation of Kansas." – Bruce Eder / AllMusic

"The second Kansas band was started immediately on the heels of the first Kansas band's demise in early 1971 by myself, Don Montre (the former Kansas I keyboard player, saxophonist and flutist), Lynn Meredith (the first lead singer of Kansas), and Dan Wright (the other keyboard player). To complete the band, we needed to find a drummer and a bass player. Zeke Low, the original drummer for Saratoga, (the band that immediately preceded Kansas I) became the drummer for Kansas II. For our bass player, we decided on a musician from Lawrence, Kansas named Rod Mikinski. We also added another saxophone player because I had come to like that instrument very much, and it became an integral part of the type of music I was writing. So we hired John Bolton, a saxophonist and flutist from Manhattan, Kansas, Lynn Meredith's hometown.

Musically Kansas II was really a continuation of Kansas I, at least initially. The musical style eventually changed and matured appreciably, but our economic circumstances did not. The others who decided to reform White Clover had a better financial time of it than we had. We continued to be as unconventional and blatantly original as we could possibly be. Our instrumentation, my composition, and Lynn's unique voice all contributed to making one unusual band.

This was a very prolific time for me; I seemed to crank out songs nonstop. Some of them fell by the wayside and were never performed. Others we played for a while and then dropped because I wrote at such a fast pace that we simply couldn't't perform them all. The music and lyrics for some of these songs have survived, but many are lost and forgotten. They weren't always very good (i.e. Juniper Bison, The Ent Song), but I would have to say that they were always different.

It was during this period that I was beginning to seriously get into various forms of mysticism and Eastern philosophies like Zen. These influences became increasingly apparent in my songs; the music and lyrics were growing more mystical and ethereal. The compositions were also becoming increasingly complex, frequently with multiple time signatures, tempos, and often long sections of experimentation and improvisation.

We were so poor that I vividly remember renting outdoor shelter houses at Lake Shawnee for the evening and rehearsing 'til the wee hours.

The second Kansas band managed to stay fairly busy, and we were able to eke out a living with our music. But we seemed to be making little progress, and success kept eluding us. On a couple of occasions, representatives of small record companies came to hear us and expressed some interest in signing the group to a recording contract. These incidents were great sources of hope for us; they became the cohesive force that bound us together.

We all had high aspirations, but nothing much ever came of them. There were no contracts, and we were being stifled by insufficient interest in the Midwest in our kind of original music. It appeared to be a classic case of being in the wrong place at the wrong time."– from Kerry Livgren's book, "Seeds of Change" (revised edition)

All tracks written by Kerry Livgren.

Cuneiform thanks our pal, Rob LaDuca, for his help with this release.