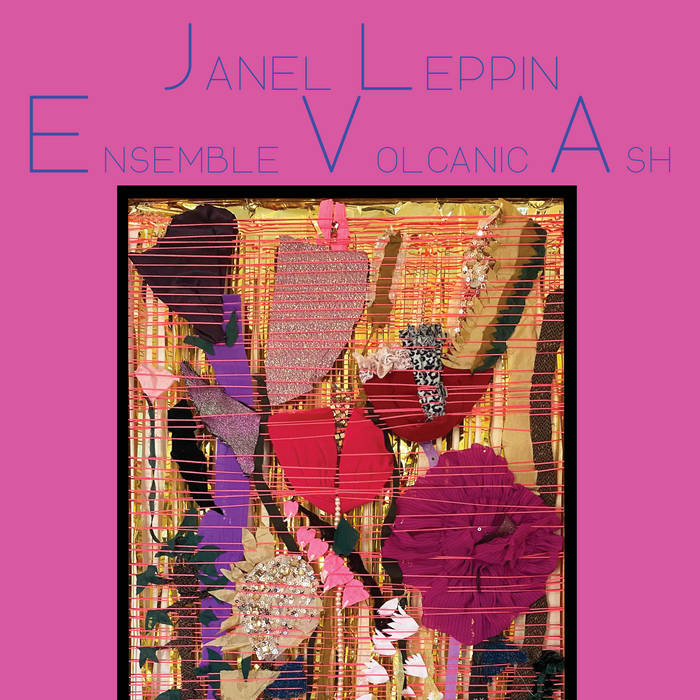 A composer and cellist who’s honed a singular synthesis of composition, orchestration and improvisation, Janel Leppin is best known as half of the experimental duo Janel and Anthony, which she co-leads with her husband guitarist Anthony Pirog. The chamber-jazz Ensemble Volcanic Ash materialized after years of incubation on Washington D.C.’s verdant new music, jazz and improvised music scenes. With this release, she steps forward as a bandleader in her own right, delivering a gorgeous debut brimming with singular musicians. The seven-piece group melds an illustrious array of D.C. talent into a glimmering expressive organism that surges, expands, ebbs and dances in multiple directions at once.

The powerhouse cast gets plenty of opportunities to shine, but it’s Leppin’s compositions that define the group in radiant, Technicolor splendor. Elegant and raw, persuasively logical and thrumming with emotion, her lapidary themes take shape with exquisite detail. Like with jazz’s most consequent composers, Leppin’s writing flows from the idiosyncratic voices in her ensemble, players who imbue every passage with their irrepressible personalities. As an instrumental voice she’s the first among equals, laying down expansive emotional parameters with each striking solo and cello-forward passage.

On an instrument with only a handful of defining improvisers Leppin makes a forceful case for herself as one of jazz’s most original cellists. Which isn’t to say she dominates the proceedings. She creates alluring lines for the entire ensemble, who all shape the music profoundly and often erase the distinction between soloist and accompanist.

"This work is a braiding together of over 32 years of classical and jazz study on the cello with more than 20 years performing in Washington D.C.,” Leppin says. “It is a distinct place to learn and try new things. I've worked with some of these musicians for well over a decade and I think it shows in the music." The group’s expanded sonic palette and vast textural resources unleashed Leppin as both a composer and a player. “It freed me up,” she said. “Having Luke Stewart in the band gave me the chance to step out more comping-wise. I could be in the midrange a bit more and solo more often. With that kind of support I found I could play more assertively like my favorite cellists, Abdul Wadud and Pablo Casals. It was a big evolution to let go of playing the role of bassist in the group.”


"It’s rare to encounter a recording with the kind of melodic richness delivered by the latest from Janel Leppin. The magic of the melodies on Ensemble Volcanic Ash is in both their voicing and their motion, behaving like a river that marks the path and carries passengers along by the force of its currents.
The mix of chamber jazz, art rock, contemporary classical, and electronic music are merely facets through which the melodies becomes focused, like glass soaking in sunbeams and spitting it back out in a prismatic light show.
I’m pretty addicted to this record, and don’t anticipate that waning any time soon; your results may vary—but I doubt it." – Dave Sumner / The Best Jazz on Bandcamp: July 2022


"Janel Leppin is a picture of versatility. Not only has she been a pillar of Washington, D.C.’s cre- ative music community for the last 20 years, but the cellist, composer, arranger, and singer has made significant marks in other scenes
as well. She’s contributed cello arrangements to the Messthetics, played with punk outfit Priests, and records art-pop under the Mellow Diamond moniker.
Leppin leans into a jazz-centric vision on the majestic and occa- sionally abrasive Ensemble Volcanic Ash, which affirms her place as a boundless musician who constantly leaves the listener intrigued. It’s a puzzle in which jazz, chamber music, contemporary classical, and punk seamlessly coalesce with bracing results.
Ensemble Volcanic Ash, comprising Leppin, bassist Luke Stewart, harpist Kim Sator, guitarist Anthony Pirog, alto saxophonist Sarah Hughes, tenor saxophonist Brian Settles, and drummer Larry Fergu- son, exquisitely captures strings-driven melody, harmony, and noise at a furious clip. They both tug at the heartstrings and bust ears.
Leppin’s shimmering yet melancholy cello opens on a classical note on “Children of the Water,” setting a charged tone. “Woven Forest” is uplifting in a Coltrane-esque sense before putting the pedal to the metal at the halfway point, in which Pirog (also of the Messthetics, and Lep- pin’s husband and frequent collaborator) sprays heavy doses of guitar skronk. The nine-minute epic establishes Leppin as clear leader of this mighty troupe, her bows, scrapes, and clatter illuminating a wide range of soul-baring emotions while her band serves as a rhythmic beacon
of light. Ensemble Volcanic Ash runs the gamut of the meditative (“Her Hand Is His Score”), the spiritual-jazzy (“Clarity”), and the punkish freakout (“She Had Synesthesia”) with near-effortless command on its dazzling debut." – Brad Cohan / Jazztimes EDITOR'S PICK