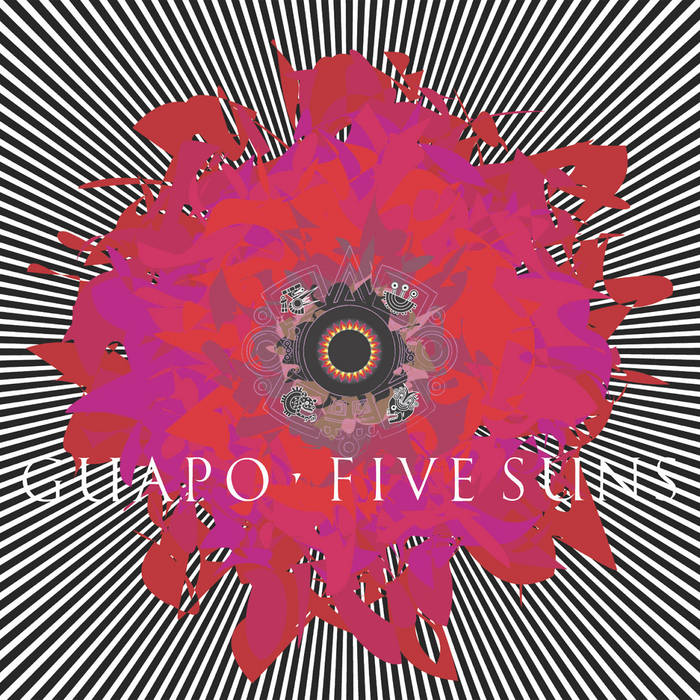 Dan Piponi Five Suns II is the standout track for me. Listen for the electronics (sounds like someone twiddling knobs on a signal generator) buried under the muscular drums and bass. Sort of science fiction B movie material. Good stuff. Favorite track: Five Suns II.

Chris van Eijnsbergen Guapo is great music, very powerfull, complex and has sometimes a repetitive structure. The music has something worrying.

scubageek Excellent album that continues in the tradition of the classic Magma albums!

Guapo is a British trio that plays an intense music that straddles the boundaries of progressive, noise, minimalism and avant-rock. Their sound has been compared to such artists as Magma, Boredoms, King Crimson, Univers Zero, This Heat, Ruins, Sun Ra and Terry Riley. As Sound Projector put it, "Guapo come on like all the hellhounds of Magma, Eskaton and Ruins were after them...on a par with Magma’s Kohntarkosz or Univers Zero’s Ceux Du Dehors". Five Suns is the band’s fifth album, and its first on Cuneiform.

Five Suns is Guapo’s most apocalyptic and dynamically accomplished work to date, bringing a new sense of sonic and spatial awareness to the band's trademark sensibilities of complex song structures, harmonic atonality and percussive mantras. The Five Suns makes use of vintage equipment such as Fender Rhodes, mellotron, Moogs and gongs to create a colour-saturated patchwork of epic, primordial beauty. The new instrumentation has allowed their sound into more ambitious vistas, where progressive influences are turned on their head by both the infusion of hardcore rock energy and the use of hypnotic, trance-like repetition. Over the course of the 46 minute title track, as well as the two additional pieces on the album, the manic jazz-inflected drumming, brooding zeuhl bass and pointillist keyboards maintain a relentless driving momentum while deftly negotiating a carefully controlled ebb and flow.

Recorded, mixed and mastered by Pete Lyons at Zed One Studios London between August 2002 and April 2003.