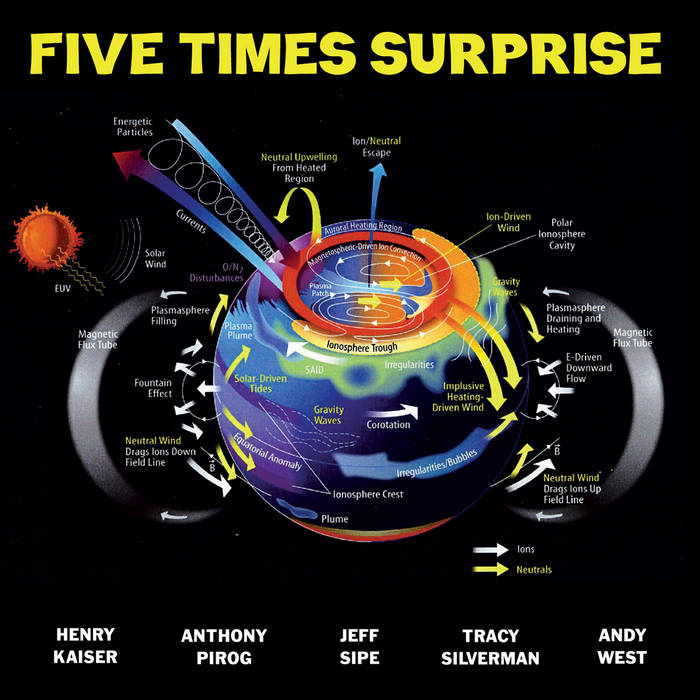 A Man Lost In Time

Five Times Surprise brings together a volatile mix of longtime compatriots and newly forged relationships. The distinguished improvisers all boast exceptionally diverse resumes. More than finding common ground, they reveal a vast universe of possibilities fueled by creative conflagration and genre blurring. “We’re improvisers who can walk into a room and create something together,” says the project's original instigator Henry Kaiser, who then listed the salient qualities of his fellow players here: the ability to listen, kindness, generosity, and—rare in this electric realm—a sense of humor. All those factors were at work on this new recording.

Kaiser regards many of his musical projects as “fun, experimental science projects” and this band came to life when he was offered a week to rehearse and then record in a professional studio with whomever he wanted aboard! This gave all of these musical masters of the free the chance to play exactly what they wanted to play in an electric jazz/rock context.

Five Times Surprise comprises a wealth of six-stringers: Kaiser on guitars and effects; his friend, the DC-based unorthodox guitarist Anthony Pirog, who is currently reaching a new audience as a member of The Messthetics, which features half of DC legends Fugazi; six-string bassist Andy West who was a founding member of the legendary Dixie Dregs (formed in the ‘70s and steeped in hard, southern rock with a heavy-meets-classical sound); and renowned fusion six-string electric violinist Tracy Silverman who has worked with Turtle String Quartet and Bach To The Future and progressively beyond.

Add volcanic drummer Jeff Sipe [who has recorded with Shawn Lane & Jonas Hellborg, co-founded Aquarium Rescue Unit and toured as the opener to John McLaughlin’s last US tour] to the mix and you get the full background to the formation of the band who recorded intense and complex music that owes something to the influence to John McLaughlin’s pioneering jazz-fusion band Mahavishnu Orchestra. “It’s not a tribute to John and the group,” Kaiser says. “It’s our personal experiences of that music that resulted in the processes that brought us all together. We all loved that music. All the 5XS tunes are originals that we collectively wrote, except for one Mahavishnu cover, ‘You Know You Know’”

Special thanks to Rainbow Sipe, Steve Fishell for the loan of The Blue Demon, Premier Guitar and Ted Drozdowski for the Rig Rundown, Toshihiko Tanabe, D’Addario Strings, Joe Glaser (who built the violin), and Carter Vintage in Nashville.