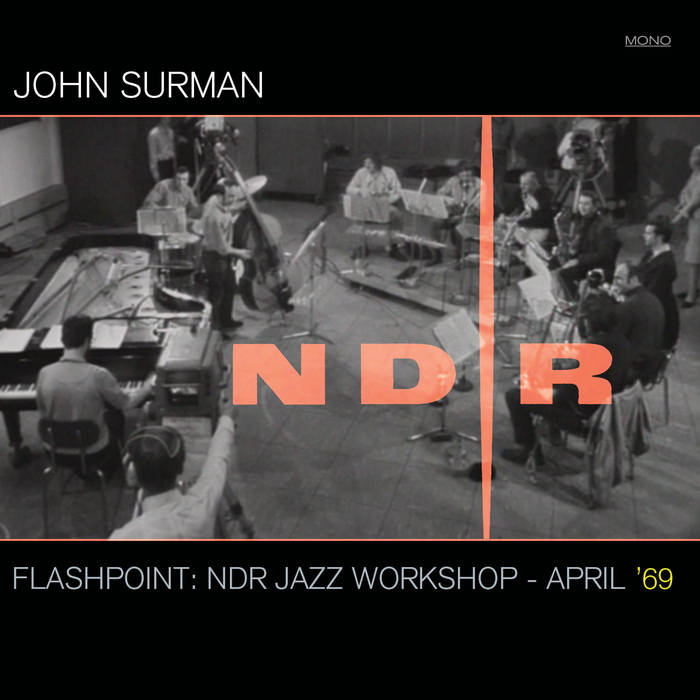 "Flashpoint: NDR Jazz Workshop—April '69 is a stunning discovery. Featuring unreleased material executed by a unique ten-piece line-up of European jazz luminaries, it provides a fascinating window into the development of British saxophonist John Surman at the very beginning of his career. Capturing an international all-star ensemble working through Surman's formative concepts, this informal studio session was taped in Hamburg, Germany for the NDR Jazz Workshop, a weekly television series. Despite being recorded in mono for televised broadcast, the audio and video quality is remarkably good considering the source material. Released by Cuneiform as a double disc set, the CD contains the isolated audio tracks, while the DVD features the entire 45 minute performance as filmed, preserving snippets of illuminating in-between song banter as well."
– Troy Collins/AllAboutJazz.com

"For fans of 60s Brit-jazz, the band is an absolute dream team featuring the era’s most vibrant players: Alan Skidmore and Ronnie Scott on tenor saxophones, the late Mike Osborne on alto, as well as Canadian trumpeter Kenny Wheeler, South African bassist Harry Miller and the criminally under-appreciated drummer Alan Jackson. They provide a big band heft that gives themes like Surman’s Western-tinged Mayflower an orchestral lushness....The clincher is the inclusion of a DVD, which presents the original German TV show from which the cuts are taken. Clear, crisp, black-and-white footage brings the date vividly to life, Surman a long-haired 24-year-old energetically throwing himself into his solos. It offers a rare chance to witness the eyes-tight-shut intensity of Osborne, and Skidmore’s verdant mop-top is quite a sight too. As a snapshot of deep 60s jazz, British or otherwise, this is 100% gold."
– Daniel Spicer/BBC.co.uk

"Cuneiform Records casts once more into the well-stocked stream of German radio and television jazz broadcasts, from which they previously fished out exemplary Brotherhood of Breath releases, and reels in another impressive catch. This time, they’ve landed a superior session by John Surman and a ten-piece big band. It’s an exhilarating date of Coltrane-influenced, modal-based free jazz that been cross-fertilized with other influences and stamped by Surman’s own unique voice. The Coltrane influence is obvious in the way Surman scales mighty vertical precipices in his solos. However, lovely English meadows are tucked among these crags of notes thrusting upwards and plunging earthward; the folk music-rooted lyricism of these passages based clearly in Surman’s heritage....Surman’s band includes many of his mates from groups he’d been working with including trombonist Malcolm Griffiths, saxophonists Alan Skidmore, Ronnie Scott, and Mike Osborne, trumpeter Kenny Wheeler, bassist Harry Miller, and the tragically overlooked drummer Alan Jackson. The NDR workshop format called for German musicians to join the featured artist, so pianist Fritz Pauer and trombonist Erich Kleinschuster are in the band as well. ....The two-disc set includes a DVD of the full television broadcast in addition to the CD of the just the music. There’s no additional music, but the video is exceptionally clear and well produced, using more than one camera, and the visuals are rich in details that audio alone can’t reveal. It’s somewhat shocking to hear the intensity of Osborne’s solo issuing from such a fresh-faced, almost cherubic, young man. Miller’s hooded, sleepy eyes betray his concentration and intelligence. And there’s entertaining period detail like the groovy ’60s neck ware – Pauer’s beads, Griffiths’ kerchief and turtle neck shirt, Wheeler’s narrow tie. There are also more substantial things to be gained from watching the video, like how hard Miller plucks to get that huge sound of his...This was a committed, creative little big band, helping to establish a distinctively British style of jazz, and playing with all the power and enthusiasm it could muster. An important addition to Surman’s already impressive catalog."
– Ed Hazell/Point of Departure

"Any John Surman is welcome, but this is special...the music comes leaping at you from the start."
– Peter Bevan/Northern Echo (UK)

For over 50 years, John Surman has been one of England's best known modern jazz musicians. His career began in the late 60s as both a sideman and a leader with such notable greats as John McLaughlin, Chris McGregor's Brotherhood of Breath, Terje Rypdal, Mike Westbrook, Barre Phillips, Albert Mangelsdorff, Chick Corea and many others. He began working with the ECM label in the late 1970s where he has released a string of fine work that continues to this day. Every period of his career is filled with highlights, which is why Cuneiform is exceedingly proud to release for the first time ever this amazing document of the late 60s 'Brit-jazz' scene.

The NDR Jazz Workshop was a weekly show featuring all manner of jazzmen of the day. The taping of this NDR show was around the same time as Surman was recording his second album as a leader, How Many Clouds Can You See, so this is a unique chance to get an expanded view of his formative work as a leader and also at the early work of his musical compatriots who appear with him here. For this occasion, Surman led a ten-piece ensemble featuring the cream of modern British jazz players: John Surman - soprano and baritone sax, Kenny Wheeler - trumpet and flugelhorn, Alan Skidmore - tenor sax and flute, Ronnie Scott - tenor sax, Mike Osborne - alto sax, Malcolm Griffiths - trombone, Harry Miller - bass and Alan Jackson - drums, as well as two Austrian musicians, Fritz Pauer - piano and Erich Kleinschuster - trombone.

Heard (and seen on the CD+DVD version) on Flashpoint for the very first time since the original broadcast over 40 years ago are five great performances, including two excellent Surman compositions that he never recorded elsewhere. High quality audio recordings from these musicians from this period are quite rare and video footage is basically non-existent. Captured in excellent mono sound, this release is an exceptional and hugely important document that will blow the minds of Brit-jazz fans and will open the ears, eyes and minds of those who don't know the great and distinctive work of these fine musicians!