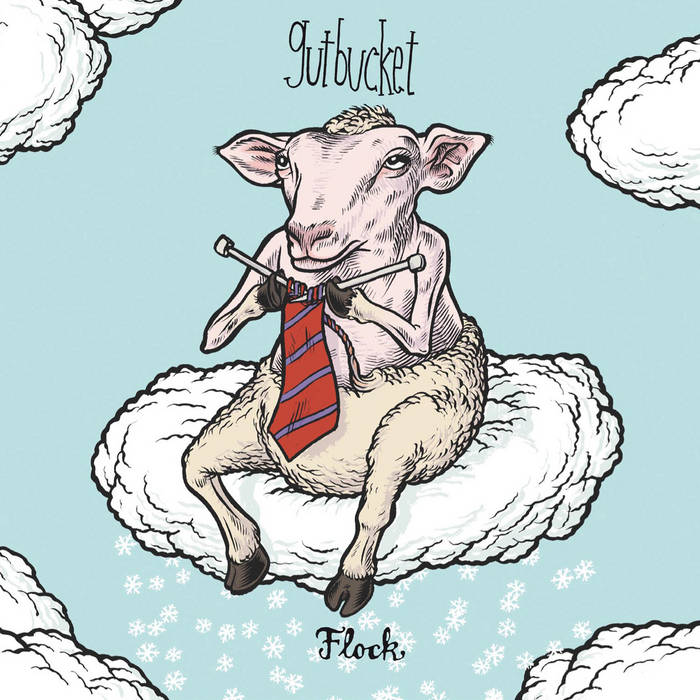 "Over four previous albums, New York's Gutbucket have established themselves internationally as a no-holds-barred Rock in Opposition-cum-avant-jazz act that plays an unrelenting, sophisticated brand of composed and improvised music driven by an aggressive use of dynamic force and sly humor. ...Flock is an exciting ride, full of fine ideas, terrific arrangements, quizzical moments, explosive surprises, and drop-dead killer execution." – AllMusic

"As they've done since their inception, Gutbucket delights in moments of aural squirming and brainy humor. Here, the band tried out a new approach...as the quartet storms through a series of odd-meter rhythms and dissonant melodies, an underpinning of tenderness emerges to smooth out some of the material's complex, angular edges.... That constant presence of something soft and vulnerable throughout such math-rock-oriented material adds depth. It also provides a lifeline when the band's punk instincts kick into overdrive and they start grinding out chords with the frenetic pace that makes their live shows so memorable" – Downbeat

“Forcing a conversation between punk, funk and free jazz for saxophone, guitar, bass and drums.” - The New York Times

“A classic case of a band that defies categorization.” – The Washington Post

What happens when you take four highly opinionated, strong-willed and creative composer/musicians and put them in a band together? You might have a volatile problem on your hand...or else you have Gutbucket. From the beginning Gutbucket has had no single bandleader; the result has been an expansive yet unified and recognizable group sound.

With Flock, the group's fifth release, the twelve year-old Brooklyn-based quartet push their composer-driven, art-rock-tainted chamber jazz into new terrain. The group attacks their jazz with the ferocity usually reserved for punk. Their music is filled with layers of mature arrangements and a full-throttle blend of energy, chops, melody, intricacy and noise.

From the beginning, Gutbucket’s music challenged New York’s downtown norm – “a no-holds-barred approach to the jazz-rock paradigm” (The New York Times, 2010) – bringing a completely unique, road-tested performance and a sound that tilted much further towards rock than many of its jazz contemporaries. Gutbucket’s brand of jazz continues to have its signature biting edge, cunning sense of humor and appreciation for the loud and theatrical. Improvisations are woven seamlessly and sometimes unexpectedly into the band’s growing repertoire, and each composer in the group has developed an individual voice that simultaneously supports the collective.

Flock cements Gutbucket’s sound – still wearing the indie rock influences on its sleeve, but delving deeply into all four members’ work as individual composers, assimilating contemporary classical, free jazz, mathy art rock, and more. Audibly, Gutbucket learned from its decade of record-making and has produced its most ambitious disc yet. The band has produced a CD that is hard-hitting yet nuanced, with a new sonic and compositional breadth. Gutbucket’s imagination is in full bloom on Flock; the band sounds exactly like itself: immediate, ferocious, ambitious and inviting. During their dozen year ride, Gutbucket has brought its “impressive balance of passionate lyricism and pummeling angularity” (Time Out New York) to festivals, clubs and concert halls in 33 US states and 19 countries. All of this work and energy and power has been harnessed on Flock, the latest in their series of impressive albums!