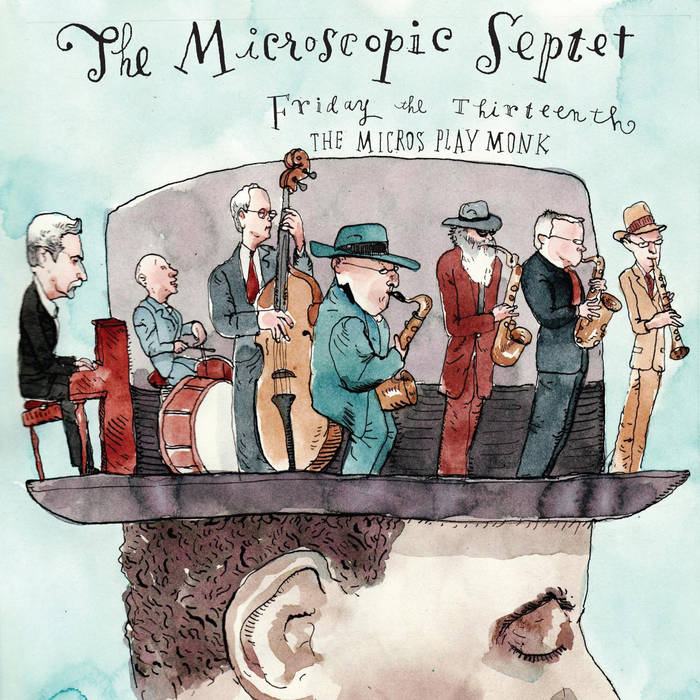 The Microscopic Septet were voted the #5 jazz group in the 59th annual Downbeat Poll in August, 2011!

“Although the reunited eighties downtown mainstay the Microscopic Septet features two exceptionally individualistic composers (and superb improvisors) in the pianist Joel Forrester and the soprano saxophonist Phillip Johnston, its latest album “Friday The 13th,” is devoted to the music of Thelonious Monk; it is a glorious fit.”
– The New Yorker

"It is splendid fun." – JazzTimes

"Always in balance between affection and irony, they have been able to pay homage to the tradition without losing their ability to renew it, even in a dramatic way. This successful CD is one of the best tributes ever paid to Monk."
– Musica Jazz (Italy)

"Just about the time you ask yourself, “What else can be done with a Monk tune?” The Microscopic Septet comes in to blow you away. Fueled by inventive arrangements by soprano saxophonist Phillip Johnston and pianist Joel Forrester (with one by Bob Montalto), the Micros twist and turn through the Thelonious Monk songbook with a spirit of ambitious grace, super-sized energy and flat-out fun...Septet co-leaders Johnston and Forrester have been loving and playing Monk together since the 1970s, and their joy infuses every second of this disc."
– Downbeat editor's pick

"...the Microscopic Septet...is ideally suited to reinterpret Monk. The arrangements pay homage to the spirit of the compositions while stretching them in all kinds of fresh directions, breathing life into even the most familar tunes. The counterpoint is sharp and crackling, the solos are tight and economical, and the ensemble is adept at following all the melodies' twists and turns. It's really quite the musical package. If youy like Monk's music, jazz in general, or creative music of any sort, this CD should be in your collection."
– Signal to Noise

Composer and pianist Thelonious Sphere Monk (1917-82) is one of the top creative deities in the pantheon of American Jazz Greats. His tunes, once considered radical and appreciated by the cognoscenti, are now beloved standards. The music of Monk was also the catalyst that sparked the creation of one of New York’s most legendary and important jazz groups, the Microscopic Septet.

Since its founding in 1980, under the co-leadership and co-compositional duties of soprano saxophonist Phillip Johnston and pianist Joel Forrester, "the Micros" have been "New York's most famous unknown band"; since 1990, the catchy, film noir theme they created for NPR’s “Fresh Air with Terry Gross” has aired daily on stations across America, and may now be the most-broadcast jazz tune in the world.

In 1974, the Monk tune: "Well You Needn’t" first brought the future Micros co-leaders together by chance. Johnston was living in the Bowery at the time, and Forrester, hearing music, barged into his apartment, unannounced: "I was playing a Thelonious Monk tune, and a guy I had never seen before came walking through my door, which wasn’t locked - those were the hippie days..." The encounter sparked a friendship and working relationship, in which Monk’s music reverberated on multiple levels across the years. Another chance encounter – at chicken and ribs place West Boondock, forged Forrester’s friendship with the Baroness Pannonica de Koenigswarter. And through the Baroness, Forrester would ultimately meet and periodically play piano for Monk. Since Johnston and Forrester’s first meeting, Monk’s music has remained an inspiration and guiding light throughout their music careers. In addition to creating and playing their own music, they always played Monk’s music with the Microscopic Septet, but due to their limited number of releases and their copious original songbook (more than 180 tunes), they only previously recorded one Monk composition. This new album rectifies this omission. Featuring original arrangements of 12 Monk tunes, half from “back in the day” and half newly-written for this recording, the Microscopic Septet make clear their line of descent from Monk. The humor and angularity of Monk’s compositions mesh easily and joyfully with the elaboration and juxtaposition of the Micros-style arranging. This is a true celebration of Monk by a group that can arguably be called his most sensitive and sensational heirs.

Friday the 13th is surprising yet inevitable: a long overdue party with the master, at which The Micros Play Monk.