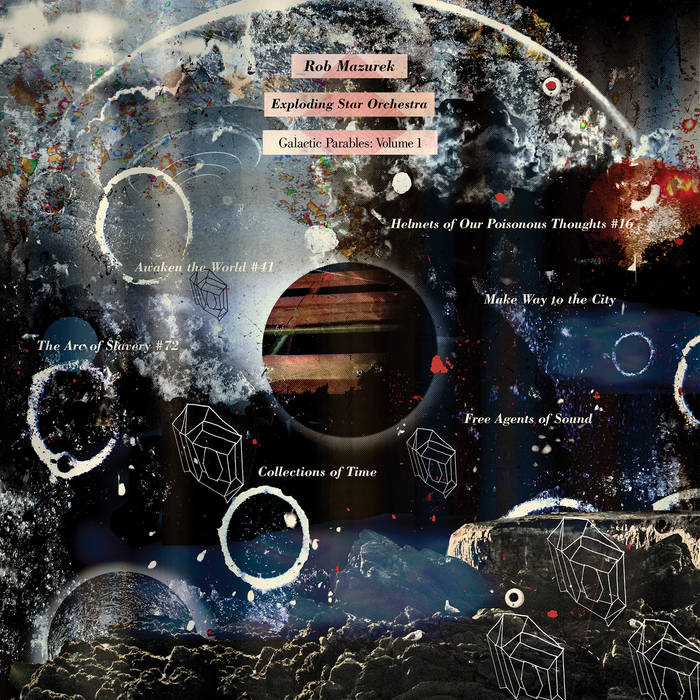 "Mazurek and company channel electric Miles, Sun Ra, and the Art Ensemble of Chicago to make a recording that is cosmic, spiritual, raw, and powerful."
– Avant Music News

"I thought the whole band was exceptional. Very shocking, actually, to see how well they absorbed all of that Sun Ra influence and went on to do their own thing...they've absorbed all the things that are relevant so they can take all of that and make their own statement...they sound great to me." – Amiri Baraka after hearing the music on CD 1

Composer, cornetist, electronic & acoustic sound specialist and musical director Rob Mazurek leads his largest regular ensemble, the Exploding Star Orchestra through one of his most ambitious recordings. While Galactic Parables: Volume 1 is a self-contained cosmos, marked by colliding melodic lines and startlingly beautiful passages, as the title indicates, it’s part of a larger work. Ever since Exploding Star Orchestra’s debut recording, Mazurek has been gradually building an epic science fiction opera inspired by the writings of Samuel R. Delany and Stanislaw Lem. With Galactic Parables his vast speculative realm is coming more clearly into focus with an apocalyptic vision of alternate universes, machine reproduction run amuck, and the colonization of distant planets. Galactic Parables “is the first record where we’re getting close to hitting on the libretto for this future opera,” says Mazurek, who by both inclination and geography is linked to a constellation of Chicago avant-garde pioneers. Ultimately what makes the record so enthralling on both the flight into the cosmos and the return journey is that the Exploding Star Orchestra brings together a creatively charged cast of improvisers:

All of these musicians have performed and recorded together under Mazurek’s leadership in various ensembles and configurations. In many ways, Exploding Star Orchestra is the mothership, the “conceptual, compositional and philosophical center of all my work.” Mazurek says. The band came together in 2005 when the Chicago Cultural Center and the Jazz Institute commissioned Mazurek to create a vehicle that could encompass the disparate styles and ideologies of avant-garde music unfolding in Chicago. Conceived as a one-off event, Exploding Star took on a life of its own, and has continued to evolve reflecting the transient nature of musicians’ lives. Each subsequent Exploding Star Orchestra project has featured an evolving cast of players.

The universe is a very big place. Rob Mazurek is doing his part to fill it with glorious sound.

Recorded live at the Chicago Cultural Center on October 18, 2013 by Ken Christianson, assisted by Deundeun Cho.