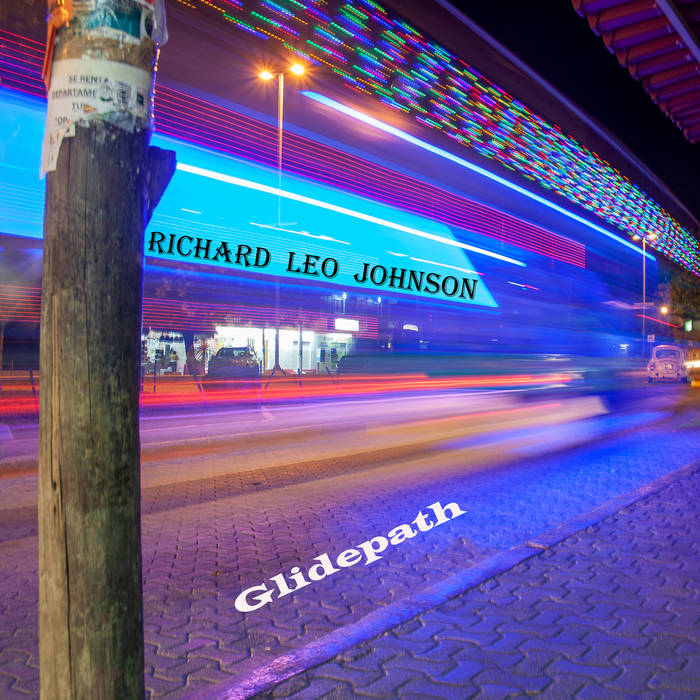 Cujo DeSockpuppet It's an amazing record. I stop doing anything and luxuriate in it.

"Richard Leo Johnson is a self-taught guitarist whose unorthodox acoustic style is reminiscent of the late Michael Hedges. While he is often placed in the new age camp, his sonic and rhythmic whirlwinds are often far more intense than that term implies. He claims Leo Kottke, John McLaughlin, and Pete Townshend as influences. Some will also detect strong hints of Larry Coryell, Ralph Towner, and Pat Metheny.

Born and raised in Arkansas and residing in Georgia, Johnson was quite successful as an architectural photographer before becoming a musician. His debut recording, Fingertip Ship, was released in 1999 on Blue Note Records. Language, also on Blue Note, appeared in 2000..." – AllMusicGuide biography

NEARLY all the above is true, HOWEVER....

A decade before Blue Note, Richard was a touring guitarist and endorser of Taylor Guitars, performing at clinics and instrument shops all across the USA, and he released two, nearly unknown, cassette-only releases.

This is the second of those two releases!

Richard Leo Johnson is one of the most innovative and inspired acoustic guitarists who emerged from the American music scene in the 90s, before the resurgence of acoustic guitar players. Johnson’s style, characterized by complexity, exhilarating speed, and hauntingly unfamiliar harmonies created through ‘found’ tunings, marks this self-taught player apart.

Richard was raised in America’s deep South, in a small Arkansas town in the Mississippi Delta. A good indication of what Richard is about is captured when he recalls that his “real jumping off point” was a home-made cassette he received as a teenager, which featured The Mahavishnu Orchestra’s Inner Mounting Flame on one side, and Leo Kottke’s Greenhouse on the other; “I thought both sides were by the same artist! The initial impact was that it was somehow possible to make something happen that fused the linear liquidity of McLaughlin and the dense harmonic structure and drive of Kottke.”

Practicing incessantly on his own, Johnson developed an idiosyncratic playing style which combined plucking and strumming, alternating between 6, 12, and 18 strings (a 2-necked McCullum guitar with 6 and 12 strings), using all parts of the guitar, and employing 30 tunings he devised.

TROPICAL NIGHTMARE: The reclusive poet Roy Douglas Burroughs wrote a play by the same title. He wandered the streets of my home town in South Arkansas, and occasionally sold handmade books at the local mall. Once day while moving his typewriter from an upper shelf in his room, he slipped and fell, ending his private career.
GLIDEPATH: The smooth water behind a boat, where one seeks refuge while skiing.
THE MOON IS A SKY THING: The title of a poem by the Neo Dada, Modern Primitive Classicist, Randy Tommy Cox.
NOT A STEP: Ode to the top rung on a ladder, which we use despite instructions otherwise.
TENNESSEE FAULTZ: For the Earthquake that never happened.
19 STALE COOKIES: A typical gift from my neighbor who collects aluminum cans for a living. His lack of personal hygiene is overshadowed only by his generosity.
SILVER SAUCERS: - eyes, eyes -
FELTON: My second guitar teacher sported a lime green guitar, requested payment before each lesson; After my mom would leave, he made a quick trip to the liquor store, getting back just in time to play a song or two.
PETALS: For the tattoo of the Rose and a Snake with a Flaming Tail.
BLUE HOLIDAY: False starts
CATCH & RELEASE: For my daughters fascination with a toy glockenspiel.

Recorded by Ed Nicholson in Little Rock, Arkansas in 1989.

This was the follow up recording to "The Sleeping Porch".
A bit more experimental, and with added players on some tracks for more of an ensemble feel.

All compositions by Richard Leo Johnson except All My Friends by L. Cook.
Richard uses Taylor and Guild guitars, Sunrise pickups and D'Addario strings.

Originally released on cassette in 1990. This was Richard's second release.