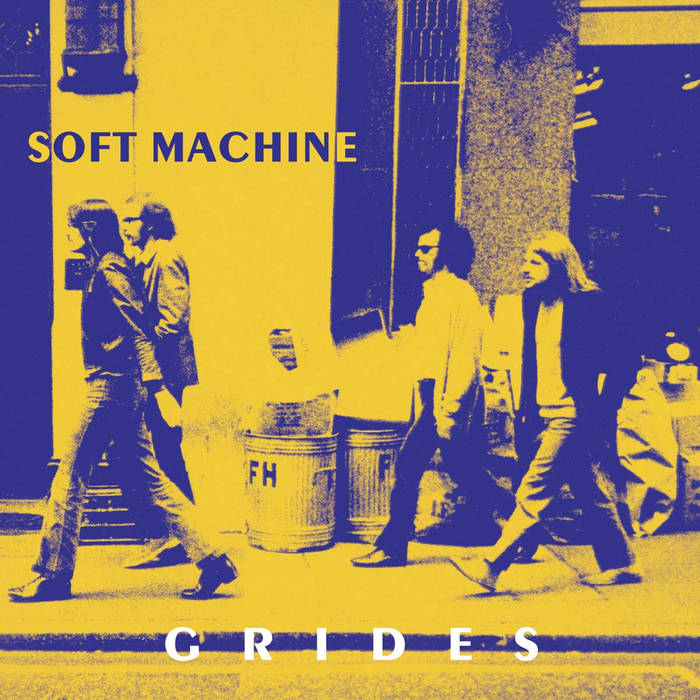 Soft Machine were one of first and one of the greatest jazz/rock bands of all time. Their importance and influence was especially great in Europe, where they influenced several generations of bands, and their influences can still be heard to this day in bands like Jaga Jazzist and beyond.

Grides presents the most best-known version of the band (Elton Dean, Hugh Hopper, Mike Ratledge, Robert Wyatt) recorded live at the Concertgebouw in Amsterdam on October 25, 1970, in a high-quality, previously unreleased recording, just a few months after the release of Third and at the peak of their popularity. It showcases them in transition between releases, with the band performing 3 of the four works from Third, as well as some of the earliest recordings of material from the upcoming Fourth, including some very different arrangements to what would eventually end up on that release. In addition, it features the earliest recording of Elton's Neo-Caliban Grides, which has a fairly lengthy composed section that was never heard again.

Bottom line: another excellent and essential archival release from a great band!

"Soft Machine...certainly rank among the most influential 'out' rock bands."
– Dusted

"Cuneiform can always be counted on to unearth some gems from the late-'60s and early-'70s Soft Machine live concert archives, but with the 2006 CD/DVD release Grides the label might have outdone itself. The audio CD features keyboardist Mike Ratledge, bassist Hugh Hopper, saxophonist Elton Dean, and drummer Robert Wyatt performing material mainly from Third and Fourth before what sounds like a huge (and hugely appreciative) audience at Amsterdam's Concertgebouw on October 25, 1970. This is a well-recorded document of the "classic" quartet caught live less than four months after the landmark Third had been released and midway through the recording of Fourth, which would be the last of the Softs' studio albums featuring Wyatt. As one might expect, Third and Fourth are guiding principles, positioning the band in entirely unique territory with Ratledge as the main composer ("Out-Bloody-Rageous," "Slightly All the Time," "Teeth") and Hopper ("Facelift," "Virtually") not far behind. This is one of Ratledge's best showcases for his patented fuzz organ techniques on both thematic material and blistering solos, and also for Hopper's precise use of his foot pedal to kick in a thick fuzz tone when the composition calls for it. Meanwhile, Dean (whose death less than four months prior to the release of Grides lends a touch of sadness to hearing him here) sounds marvelously fiery throughout, with a particularly sharp tone on saxello that nicely complements the timbres produced by Ratledge and Hopper.

As for Wyatt, his drumming is often a bit subdued, giving the kit a good thrashing but sometimes falling into the role of strict timekeeper during extended polyrhythmic keyboard/bass vamps. Of course, extended compositions with repetitive patterns, counterpoint, and odd time signatures were very much a part of the band's explorations on Third, and Wyatt may have been attempting to replicate aspects of his approach from that album (e.g, the midsection of "Slightly All the Time"). Elsewhere, there are fascinating glimpses of works in progress -- the "Teeth" opus is missing an incisor or two, absent Ratledge's concluding organ solo (Aymeric Leroy states in the extensive liners that the final studio version of "Teeth" that appeared on Fourth would be recorded three weeks later, while Graham Bennett indicates in an appendix to his Softs biography Out-Bloody-Rageous that "Teeth" had already been recorded for Fourth mere days before the band departed for the Netherlands -- on the aural evidence here, one suspects that Leroy is correct) and "Neo-Caliban Grides" includes a Dean-penned rather jagged unison theme stated by sax and piano that suggests the reedman was not ceaselessly pushing the band in a free jazz direction, but could be quite attuned to the type of conception more often linked with Ratledge or Hopper.

The CD alone would be a must-have for Soft Machine fans, but the DVD makes this set truly stunning, capturing the same lineup performing for 20-plus minutes on March 23, 1971, at the TV studio of Radio Bremen in Germany, a portion of which was shown on the Beat Club program. The DVD nicely supplements the Virtually audio CD released by Cuneiform in 1998 -- that CD came from the Softs' concert recorded by Radio Bremen at the Gondel Filmkunsttheater later on March 23 after they had finished videotaping in the TV studio, and in fact the DVD contains the same first four pieces in the same order ("Neo-Caliban Grides," "Out-Bloody-Ragious," "Eamonn Andrews," and "All White") that began the band's second set heard on Virtually. The mono mix on the DVD places the drums on the verge of inaudibility at times, but the video quality makes up for any lack of audio clarity. Sure, the video transfer to digital lends a sense of druggy unreality to the proceedings even before the light show fully kicks in. But simply put, this full-color psych-o-delic four-camera shoot puts the typical post-millennial music video to shame, coming from that far-distant era when music fans -- even rock music fans -- were interested in seeing musicians actually play their instruments.

That's right: there are lingering shots framed widely enough to watch the bandmembers soloing, interacting, or even sitting out, and very few quick cuts that move your eyes for you. The Softs were almost defiantly serious and non-theatrical (well, Wyatt can't seem to stop a flourish now and then, and his hat is a flourish unto itself), as if saying to their rock audience: hey, this is how jazz musicians do it, folks. But if you're bored by a lack of jumping around and mock emoting, there is the high entertainment value of the blue-screen light show backdrop appearing behind the group's Marshall stacks, coming to the fore and melding with Wyatt himself during the drummer's looping vocal improvisation. It's as if the video were initially directed by Jonathan Demme, who momentarily left for a cup of coffee and returned midway through the shoot to find Ken Russell occpying the director's chair, having wandered in from the set of Altered States. Yet even at their trippiest, the visual effects still manage to avoid intruding on the serious business of depicting four musicians playing some of the era's most singularly innovative music in expert fashion."
– Dave Lynch / All Music Guide

Recorded on October 25, 1970 at the Concertgebouw, Amsterdam, The Netherlands.