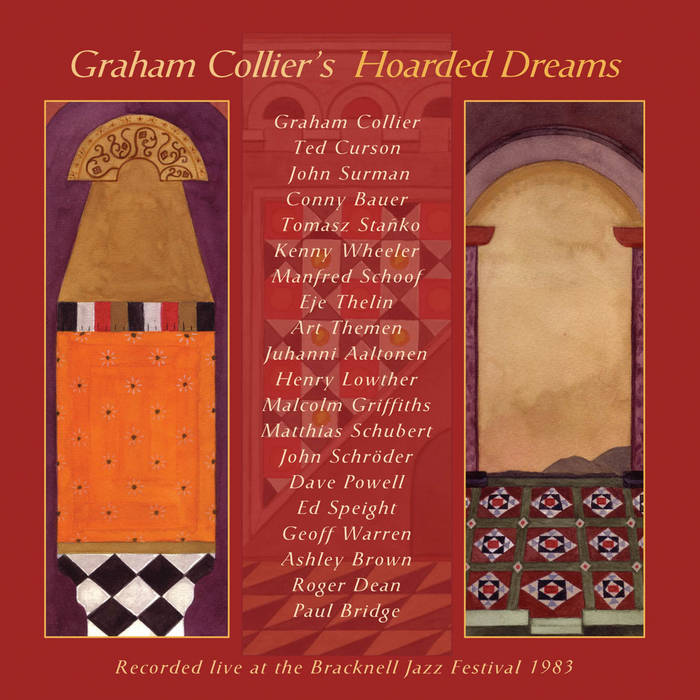 Graham Collier is one of the best known and most important British jazz composers and over a 40 year career, his list of compositions and commissions has grown to encompass ensembles around the world. He is well-known as an author and educator, having written seven books on jazz.

"I came across the phrase “Hoarded Dreams” in a book...it seemed an ideal title for this commission, [which] is the realisation of the jazz composer’s constant dream: to be able to hand-pick a group of star musicians to perform a long composition written with absolutely no outside restrictions… Overall the piece inhabits (as indeed does most of my writing) that area between the purely written and the purely improvised."-Graham Collier.

The energy of the ensemble performing the piece in front of a large and enthusiastic audience is very obvious on the recording and there's some great soloing as well as ensemble passages.

"What a monumental piece of music. George Russell, Mike Westbrook, Charles Mingus and Graham Collier – how many other jazz composers could produce something of such epic proportions where both composition and improvisation combine to such powerful effect? At 70 minutes in length with a dream band – hence the title – there is just too much here to describe adequately. The trombone-dominated ‘Part 4’ with its tailgating, swing conclusion, a virtuoso solo improvisation from Conny Bauer on ‘Part 5’, Ashley Brown’s amazing drumming throughout the piece, the immensity of John Surman’s baritone growling like thunder from behind the clouds and a trumpet section heaven sent by Gabriel himself. It’s become almost trite to say it – Dave Gelly might have been the first to do so – but it’s impossible to say where the writing begins and ends and improvisation takes over. But that is essentially Collier’s project – the composition continues to develop in the performance and becomes part of the improvisation and the improvisers create the writing anew every time they play. Expect raucously abstract playing, lyrical and melodic tune-led sections, driving rhythms, mighty cadenzas and brooding moments of transcendence. You won’t be disappointed."
- Duncan Heining/Jazzwise

"The instrumentation is that of the classic big jazz band, yet it is deployed in a highly untraditional way.… 70 minutes of dazzling solos and exchanges, what really could be described as musical fireworks."
- The New Statesman

"You couldn’t tell where improvisation ended and writing took over…. The whole conception was bold and the playing magnificent."
- The Observer

Collier’s sympathetic background motifs and great stabbing ensemble chords…gave the clear signal that this was something special in jazz writing; something that was reflected in the inspiration which the piece gave to the soloists."
- The Wire