I Just Did Say Something 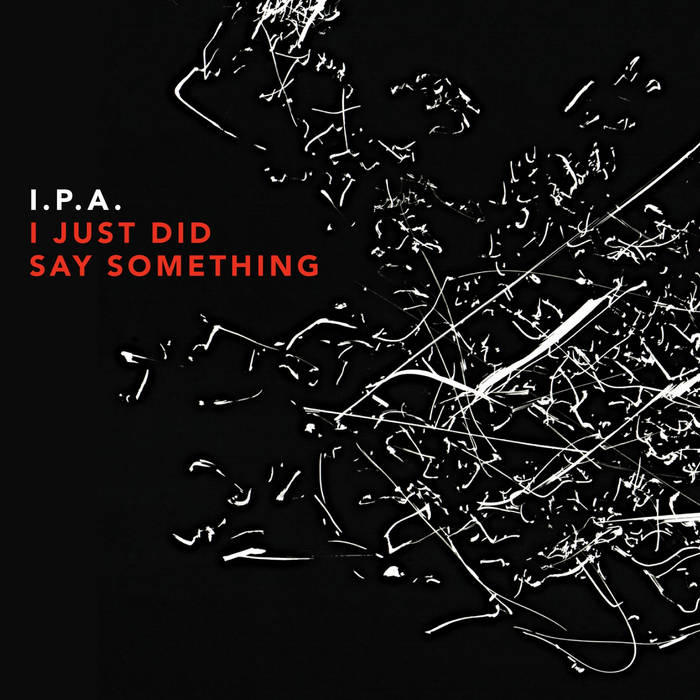 For a number of reasons, Scandinavia is currently one of the epicenters of vivid, forward-looking jazz, often marked by a tantalizing balance of form and freedom. Over the past decade, the quintet I.P.A. has come to embody the best of this volatile sensibility, which makes sense as the band draws its players from definitive Nordic ensembles such as Atomic, Motif, Trondheim Jazz Orchestra, and The Thing. I Just Did Say Something is I.P.A.’s fourth release and is the quintet’s most exhilarating statement yet; it’s the work of a band fully alive to its own power, while eagerly investigating new directions.

I.P.A. is strongly influenced by the seminal 1960s work of Don Cherry and Ornette Coleman. Harmonically unfettered, rhythmically unpredictable, and melodically unvarnished, the quintet thrives on live-wire interaction, with rapidly intersecting lines that swoop and collide, disentangle, divide and swing!
“We have melodies, but not really structured melodies,” says Nymo, one of the band’s primary composers. “We’re definitely influenced by Don Cherry. I see us as part of this Scandinavian jazz scene, but we’re open to influences from all over. We really cover a lot of ground.”

I.P.A.’s origins go back to 2007 when Nymo, Flaten and Johansen released their electrifying interpretation of Don Cherry's 1966 album Complete Communion. When Broo joined forces with the triumvirate the following year, I.P.A. was born. The quartet introduced itself with two albums released in 2009 and 2011. By their 3rd release in 2014, Ståhl had expanded the band to a quintet and All About Jazz proclaimed the ensemble, “one of the best kept secrets in the fertile Nordic musical scenery.” With I Just Did Say Something the combo has staked a larger claim, capturing the full creative breadth of this all-star ensemble.

"Operating under an acronym that doesn’t appear to have any substantive similarity to the hop-forward ale of the same distinction, I.P.A. is a Swedish/Norwegian quintet that takes as its most obvious source of inspiration Don Cherry’s Copenhagen quintet of 1966. In common with the instrumentation of that earlier influential outfit, tenorist Atle Nymo and trumpeter Magnus Broo complement vibraphonist Mattias Stahl, bassist Ingebrigt Haker Flaten and drummer Hakon Mjaset Johansen. There’s also a very cogent and abiding agreement on egalitarian input between the five musicians. Recorded in Trondheim, mixed in Austin and mastered in Oslo within the span of several months last year, I Just Did Say Something is illustrative of the speed with which an improvising ensemble can cut a record in the early 21st century.
Nymo draws the compositional short straw and contributes the album’s first three pieces. “Hort Hilsen” launches off a tight terse head into a spate of spiraling fisticuffs between composer and Johansen with braying tenor bucking against a barrage of tumult-driven drums. “Sayembara” works off the nucleus of a traditional Balinese melody and the Cherry similarities are once again prominent in how the players negotiate a wholly organic push and pull between composite parts. Stahl and Flaten start the action on “Naked Ø” in an insular duet that opens to include the horns and Johnasen. Broo and Flaten are old bandmates from their shared tenure in Atomic and their close confluence comes through on the former’s smoothly limned solo.
Stahl assumes composerly honors with the puckish “Majken” as Broo leads the charge with a muted soliloquy soon joined by Johansen’s brushes. The whole sprightly swinging enterprise rides on the supple sturdy back of Falten’s pulsing bass line with jocular individual statements from the horns, Broo taking his sans his colleagues just like the entrance. It’s back to Nymo for “Globus”, replete with a melody that sounds like the structural sibling to Cherry’s “Remembrance” and a spate of hot, free-associative blowing by the composer that would make the spirit of the late Gato Barbieri glow with pride. Once again each of the constituencies works in careful concert to create an even playing field of equals.
Broo brings “Sir William and “Barbro Violet” to the table. The first presents itself as a burner at first blush, contrasting Stahl’s malleted floating atmospherics with an incessant locomotive ostinato from Flaten before switching gears to a stout walking line and an extended smear-stained statement by Broo. The second pivots on another corpulent Flaten construction that gains resonance with the entrance of Stahl’s low hanging clusters and a staggered beat from Johansen again wielding brushes. The graceful trills and colloquial turns of brassy phrase in Broo’s solo chalk up another Cherry invocation. Flaten’s title piece brings up the rear, rising from a martial snare-heavy rhythm buttressed by another robust bass ostinato and first euphonic then rowdy sign-off from the horns. Come to think of it a crisp flavorful IPA would be an ideal libation to accompany the ingestion of these elevated sounds." – Derek Taylor / Dusted


"Scandinavians have made an indelible mark on the progressive jazz front for the past several decades.Since 2007, Norwegian-based I.P.A. has been a major exponent of the fertile Euro jazz scene. Influenced by trumpeter Don Cherry and his lineage to Ornette Coleman's legacy, this unit ups the ante by molding snippets of the past into a mode of attack, blotted by hyper- mode free bop and the frontline's sweltering solos and ricocheting horns arrangements.
From start to finish, the quintet abides by an action-packed gait amid a hodgepodge of stylistic formats, also including a moody cool jazz aura on "Naked O," designed with saxophonist Atle Nymo and trumpeter Magnus Broo's penetrating choruses and contrasted by vibraphonist Mattias Stahl's tender melodic overlays. Hence, it's a group of many colors as they navigate through these works with rebel-rousing but cohesive exchanges and surging through difficult time signatures with the greatest of ease.
The musicians' extraordinary synergy comes at you early on, especially when they add faint inflections, emotive outpourings and other aspects, coupled with their concise sharpshooting tactics and more. On "Globus," pumping horns and a radiantly triumphant theme are offset by brisk and tightly coordinated unison runs, tinted with a rubato sequence and harmonious passages, executed with pinpoint accuracy and accelerated by Stahl's fluid flurries.
Broos lifts a page out of Cherry's book on "Sir William" via his airy, raspy, and expressive start / stop phrasings atop a bop-framed pulse. And "Slakt Sving" is a dynamic free-form romp, spotted with Coleman harmolodic inferences, as the hornists redefine the primary hook atop bassist Ingebrigt Haker Flaten's staggered lines. Interestingly enough, Stahl's twofold performance complements the soloists and the rhythm section, serving as a middle man of sorts. Hence, the album is essentially an explosive, spellbinding, and well-rounded musical event, where many of the hard-edged works encompass eloquent plot developments and tuneful theme-building maneuvers." – Glenn. Astarita / All About Jazz

This recording is supported by Arts Council Norway.