by Richard Pinhas and Merzbow 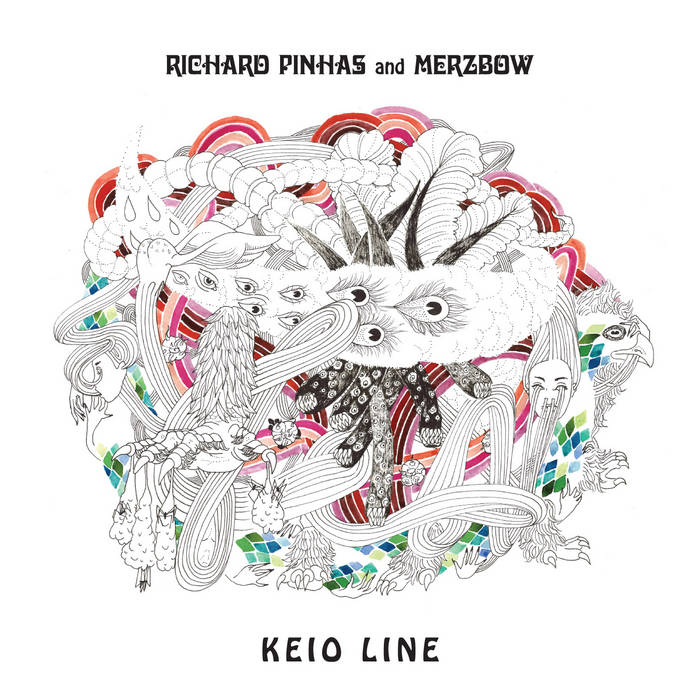 MERZILLA Brilliant ambient noise from Richard & Masami! An absolute must for fans of both artists! Favorite track: Chaos Line.

Matthew Spencer Collaborative Merzbow is my favorite Merzbow and this might be my favorite collaborative album of his. Soaring guitar drones and wildly oscillating electronics. Favorite track: Tokyo Electric Guerilla.

"...Richard Pinhas consolidates his position as the reigning master of mesmerizing, trance/ambient guitar...."
– All Music Guide

"Merzbow is essentially a psychedelic artist, attempting to create shifts in consciousness through extreme sound."
– Pitchfork

"This is the sound of rebellion, of chaos, and trashed beauty all rolled into one as a new genesis, forming a new aesthetic from the ruins. Keio Line is one of the most engaging electronic records issued in 2008, and one of the most satisfying albums released by either man. One can only hope that Pinhas continues his resurgence to the public scene, and Akita uses collaborations like this...and musical textures and dynamics more in his own music in the future. [4.5 stars out of 5]"
– Thom Jurek, All Music Guide

Richard and Merzbow are both among the best-known figures in electronic rock music today. Merzbow is probably the single best-known artist in noise music today. While Richard's work wouldn't be considered to be in the 'noise' arena, many of the artists in the field have expressed great interest in his pioneering use of synthesizers and electronics in rock and contemporary music from the 1970s until the present. Despite coming from very different backgrounds, they had long expressed admiration for each others work. Given all of this, it is probably not surprising that the most important electronic musicians of France and Japan should finally collaborate together! During Richard's second tour of Japan in the fall of 2007, he performed with Merzbow in what Richard called, "an incredible concert". A week later, at the end of this tour, they booked two days in the studio to work together again, this time on a recording. All material was recorded completely live by the two musicians, with extensive work done in the mix and re-mix stage. Keio Line (the name refers to the name of the train Richard and Masami would take from downtown Tokyo to the recording studio) is a two CD set, released at a special price, that is violent, soothing, hypnotic, noisy and trance-inducing. All aboard the Keio Line!