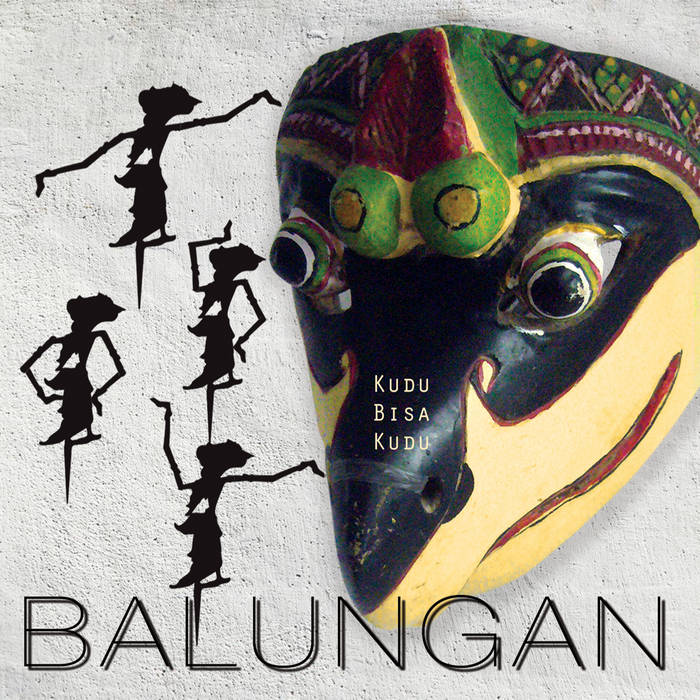 May well be the best project Chenevier has ever been involved in -- and from Etron Fou on that covers a lot of magnificent ground. Loud, immediate, and compelling." - a buyer of the album


By the end of 2022, Indonesia will see the completion of its first high-speed rail line. According to the globe-trotting musicians of Balungan, however, the train is already at the station. The 13-member band kicks off its debut, Kudu Bisa Kudu, with the nostalgic steam whistle and intentionally garbled boarding call of “Javanese TGV”, but as soon as the driving bassline gears ups, it’s clear that we’re riding a 21st-century conveyance. Gang vocals, hairpin-curve guitars, and accelerating arpeggios played on tuned percussion also announce that this is a multicultural journey — and in fact the group is made up of seven of Java’s most open-minded gamelan virtuosos, plus six equally adventurous rock musicians from the south of France.

But there’s never been a gamelan-based cultural exchange as equitable as Balungan, named after the Javanese word for “skeleton”, which is also used to describe the core melody of a musical composition. Nor has there been one as loud. The Javanese members of the band attack their gendèrs, gongs, and bonangs “like a rock ensemble,” says drummer and project sparkplug Guigou Chenevier, founding member of France’s original Rock In Opposition group Etron Fou Leloublan.

Balungan wasn’t going to be about rock musicians playing gamelan, or vice versa: one singular feature of the live concert immortalized on Kudu Bisa Kudu is that every musician has written a piece, with the arrangements developed collectively. What’s most impressive about Kudu Bisa Kudu, perhaps, is that the ensemble manages to be both coherent and diverse, even in the live setting. Despite its size and schizophonic nature, Balungan sounds like a band, in part because the performers, recognizing that their time together would be limited, honoured their commitment to rehearsing eight hours a day, every day. But Chenevier also points out that he and his fellow French musicians were inspired by their Javanese colleagues’ inclusive and boundary-free attitude towards art and life.

“When you are a musician playing gamelan in Java, you learn everything at first,” he continues. “You learn music, of course, but you also learn dance, you learn poetry, you learn puppets… all that goes into the full show of the shadow theatre. And only then do you choose a speciality. So it was very interesting working with these people, because they are very big fans of the stage, of theatre, and they know how to add often very funny stuff on-stage. So it was very alive; each performance we did was a surprise.”