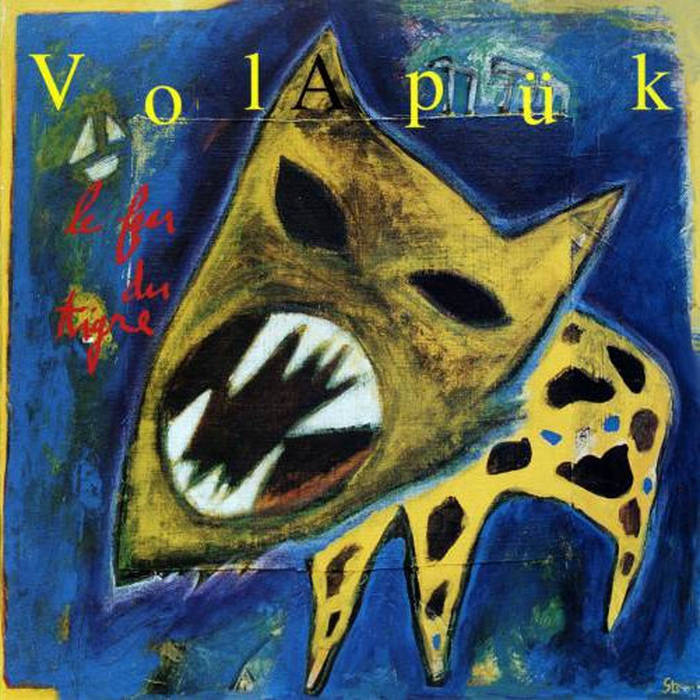 Forget the fact that you can't pronounce the name of the band and listen up! Volapük is drummer/composer Guigou Chenevier's (Etron Fou) trio also featuring bass clarinetist Michel Mandel and cellist Guiillaume Saurel.

The band has a very immediately identifiable sound, making full usage of the unusual sonorities of their instruments, along with short, rhythmically complex compositions & improvisations. Exciting, mostly composed music that will please any fan of adventurous/RIO style rock. Guigou is one of the great drummers in rock and is also a superb composer; many of the great Etron works bear his imprint. The cello and bass clarinet handle duties not normally assigned to these instruments with clarity and dexterity.

"This first release by the Volapuk trio finds the group in top form. These guys are pros, after all, with drummer and leader Guigou Chenevier already a Rock in Opposition veteran with numerous recordings as a member of Etron Fou Leloublan, and the two other group members, Guillaume Aurel on cello and Michel Mandel on bass clarinet, both with substantial classical training and performance experience.
The name "Volapuk" references an early attempt at a universal language, actually predating Esperanto by 50 years. Just as Volapuk (the language) draws from English, German, Latin, French, and Italian sources, Volapuk (the group) integrates popular and folk music of various European cultures. However, this CD is transitional, in that it displays a strong art rock and classical influence at times, as well as a substantial jazz element, especially in Mandel's clarinet work. Pieces like "El Sombrero," for example, are very much in the Rock in Opposition mold, with tricky time signatures, repetitive riffs, and the eventual appearance of Mandel's earthy clarinet, wailing over the top.
Later CDs by the group will display a greater ethnic content, and perhaps a more natural integration of musical elements, but this is nonetheless a dynamic and confident recording, anchored by Chenevier's inventive and propulsive drumming." – AllMusic