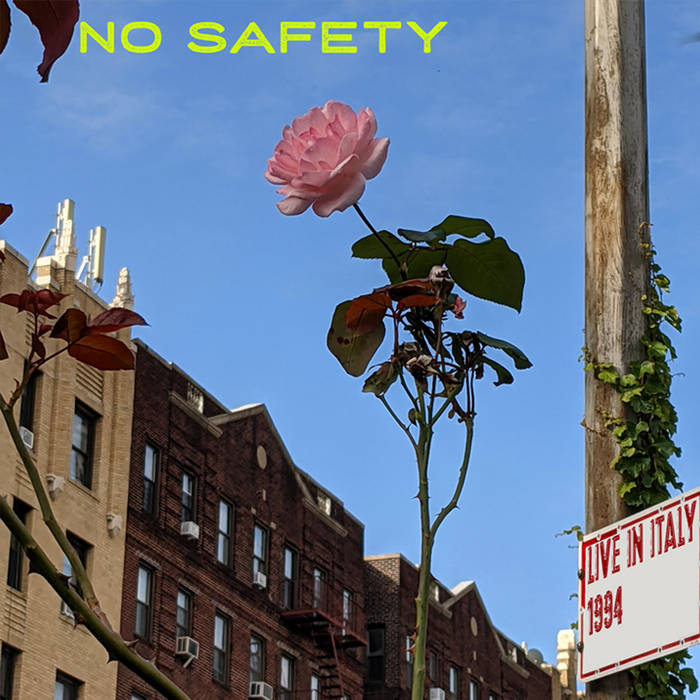 "This is so exciting from start to finish.
I saw No Safety live in New York in ’88.
They were amazing then, hot sound, like a unique, contrary voice in a scene that could take the concept of ‘cool’ a little too seriously.
This recording is several years later, they are on tour in Europe, everything is up a notch, about to explode.
I remember that European tour vibe, this catches it 100%." - Charles Hayward

Live in Italy catches the band—Chris Cochrane, Kato Hideki, Zeena Parkins, Ann Rupel and Tim Spelios—in all its fury, going out in a blaze at the end of their final tour.

Thirty years ago, there was a different virus in the headlines, and police violence barely made the news. It was different, unsafe times that produced No Safety. But we might need them now more than ever.

No Safety only released three albums during their half dozen years as one of the most vibrant bands in the maelstrom of Downtown experimentalism. They were, they’ll say today, always at their best live. The last album they released during their short life—Live at the Knitting Factory—made the case. The new Live in Italy 1994 seals the deal.

There’s an ambiguity to the anger in No Safety’s songs, an uncertainty that makes the songs all the more salient, and makes the sentiments still relevant today. It sometimes feels as if No Safety would be writing protest songs if they could only figure out where to start. There’s just too much to deal with.

Live in Italy 1994 opens with a chugging montage of three songs, incorporating the Art Bears’ “Man or Monkey” with two of their own tunes. “Not a Slave to Unforeseen Future,” draws inspiration from artist David Wojnarowicz while incorporating a song from Rupel’s previous band, V-Effect. “Pavlov” displays the diversity of textures the band was capable of, in no small part due to Zeena Parkins’ harp, keyboard and sampler. The final cut is Parkins’ “Take Me,” a jaggedly punkish anthem for contradiction and indecision, resolving in her and Rupel repeating “yes” and “no” in Russian and the words “take me” swirling down the reverb drain.

The newly uncovered recording is from the band’s last tour, and in fact the last show the rhythm section of Rupel and Spelios played with them. Rupel returned to career and family life. Cochrane focused his energies on social work while continuing to compose and play music. Parkins has been the most musically active; projects with the likes of Fred Frith, Elliott Sharp, John Zorn and countless others, recording and touring with Björk and leading her own bands have made her an international name in unusual and experimental music. But No Safety disappeared without the heralding it deserved. Now, for a momentary flash, they’re back. – Kurt Gottschalk