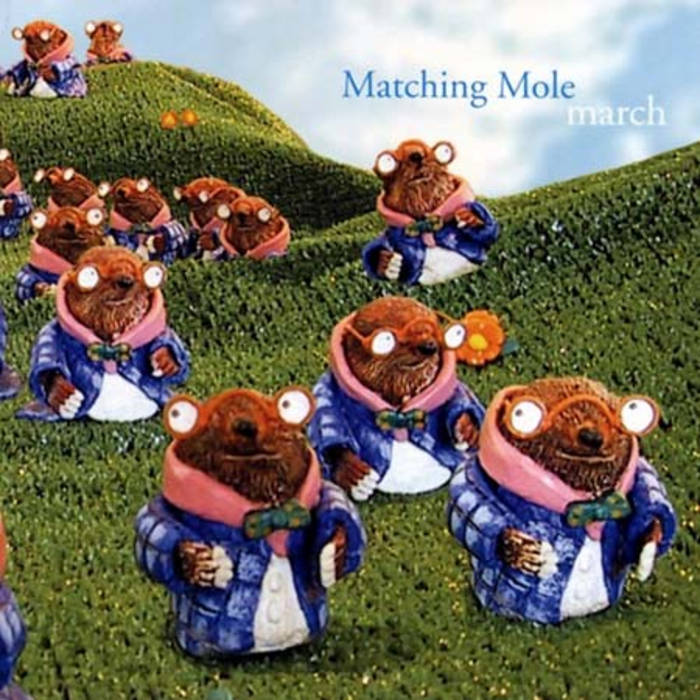 In 2001, Cuneiform released Smoke Signals, a collection of unreleased performances by Matching Mole. The band was so pleased with that album that when one of the members came across a forgotten live show on tape - identified simply as "March, 1972", they immediately contacted us, and March is the result.

Recorded live in Europe 3/72, shortly after Dave MacRae became the keyboardist, this includes the basic repertoire that the band would perform during their lifetime, with a few surprises thrown in.

The sound is surprisingly superb for a live show of this vintage, and once again Tom Recchion has come up with a charming cover.

"Great sound, great artwork - so thanks once again."
- Robert Wyatt

"Though some of the material being dredged up to satisfy die hard Canterbury scene completists is frankly a bit dodgy, you can always rely on Cuneiform to come up with the goods. Here Robert Wyatt biographer Mike King follows up Smoke Signals, his previous unearthing of Matching Mole live material with more of the same, and mighty fine it is too. (Even the notoriously self-effacing Wyatt admits that 'it wasn't all that bad' in his sleevenote).
Though only together for a year or so, Matching Mole travelled some distance, particularly when pianist Dave McRae (later to contribute incidental music to the Goodies) replaced David Sinclair. By the time this album was recorded (March 1972, a month after Sinclair's departure) the band were playing continuous sets with much room for collective improvisation amid the more arranged pieces. March captures both the uncertainties and glories of this method beautifully.
The material is drawn mainly from their eponymous first album, with guitarist Phil Miller's rifferamas "Part of the Dance" and "Lything and Gracing" in full effect. Despite their prog tricksiness, the Mole's renderings of them are faintly haphazard, teetering on the brink of destruction then turning away at the last nanosecond. Wyatt's extraordinary drumming comes across as a wired concoction of Tony Williams and Keith Moon; he and bassist Bill MacCormick sometimes appear to be operating in separate time zones.
The sublime "Instant Pussy" features Robert's trademark cosmic scatting, though without the usual echo ('Where's the sheets of sound?' he repeats as the engineer desperately searches for the right buttons and fails to find them). Another vocal gem is "No Alf Measures", Wyatt's lovely arrangement of an early Kevin Ayers tune, though their instrumental take on Caravan's "Waterloo Lily" is strictly of historical interest only.
Miller's distinctive playing has a keening, bluesy quality that sits nicely with his nibbled distortojazz stylings. His and MacCormick's sometimes wayward tendencies are kept in check by McCrae's measured, shimmering electric piano. There's sometimes a sense of a band playing at the limit of its abilities which can result in moments of tedium as well as brilliance. But as my mum used to say, you can't make an omelette without breaking some eggs, and overall this is a dish well worth tucking into."- Peter Marsh / BBC Review