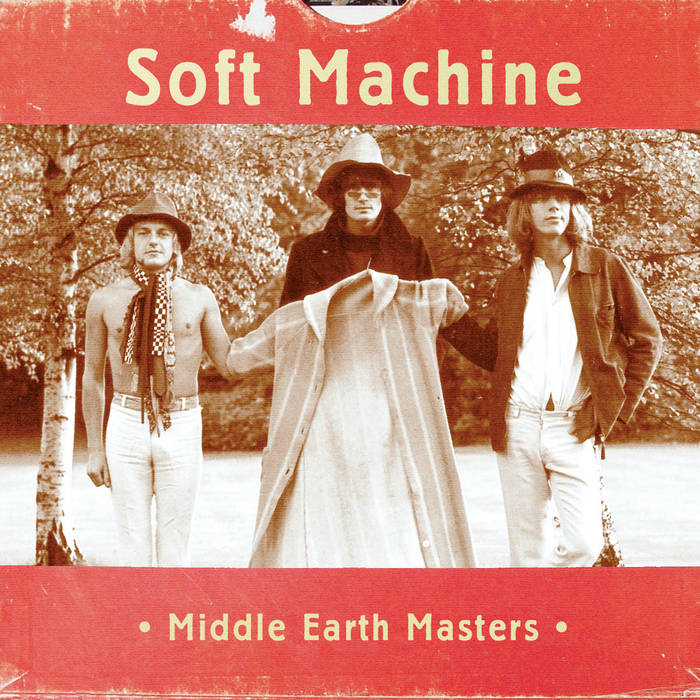 "Soft Machine were the grooviest, coolest psychedelic band of the era..."
- Phil Manzanera

The Soft Machine were one of England's original and best psychedelic bands, emerging out of the same "UFO Club" London scene at the same time as Pink Floyd. While the band would always undergo constant personnel and stylistic change, their best known lineup in their psychedelic days was the trio of Kevin Ayers-bass, guitar, vocals, Mike Ratledge-organ and Robert Wyatt-drums, vocals. They played many shows and built an audience in “swinging London” and beyond. A link with Jimi Hendrix’s management culminated in the Softs touring the USA with the Jimi Hendrix Experience two different times in 1968, playing over 60 shows as their opening act and recording their first album while in the USA during their touring, after which the band collapsed and disbanded...temporarily.
Middle Earth Masters captures the 1967-era Soft Machine trio in full concert glory, recorded live at London's legendary Middle Earth club. The performance is unbelievably freaky for 1967, with songs that feature unusual structures linked by wild solos and improvisations. Those of you who know and love the first Soft Machine album will be amazed at how much more insane and insanely loud the band actually were and also surprised to hear that Mike Ratledge was doing the crazy solo fuzz organ parts (ala the opening of Facelift) in 1967.
Includes rare, previously unissued photographs and a short essay by Michael King about these tapes and his work to make them sound as good as possible.

IMPORTANT: The source tapes for this album were recorded using semi-pro equipment under difficult conditions, at extreme volume in a concrete basement. Considering their age, their rarity, and the technical limitations of sound reinforcement of 55 years ago, we feel that the music presented is very enjoyable!
What this means in plain English is that the recording accurately presents the sound of a very loud band playing with an inadequate PA for the vocals. The band itself is very clearly recorded, but the vocals are often very low in the mix.

"Soft Machine's 1967 lineup was, for most fans, the most essential form of the band -- the core on which every subsequent incarnation would hinge upon in one way or another. Kevin Ayers (bass, guitar, vocals), Mike Ratledge (organ) and Robert Wyatt (drums, vocals) took the notion of the power trio well past its logical potentialities and created a sound that was far beyond mere psychedelia...This stuff was nuts -- but it was darn good.
Soft Machine's early live shows were brutally loud and supremely unhinged affairs -- fun for the audience, but a bear for anyone trying to capture a decent recording. Early attempts at getting the live Soft Machine experience on tape were largely failures and, for a long time, thought to be too rough for commercial release -- until now.
Bob Woolford's valiant attempt to record Soft's September 16, 1967 performance at Covent Garden's Middle Earth club has been resurrected by mastering engineer/sound-surgeon Michael King (through a laborious sequence of sonic repairs) and presented anew... King's painstaking labor of love now provides fans of Soft Machine the closest approximation of what it was like to be in that sprawling basement club with the band blasting out at you from three feet away. Considering the source, the sound is superb, but still plagued with the common problems of a less-than-ideal PA mix. The vocals (both Ayers' and Wyatt's) are pretty much buried throughout the set (occasionally peeking out during the less bombastic sections). Musical flubs and note missteps abound as well, but are more charming than annoying, giving fans even more of that "just like being there" feeling.
All in all, this is not only a good taste of the Soft Machine's early live experience, but a good document of the sound and feel of the early British underground scene as well" – AllMusic