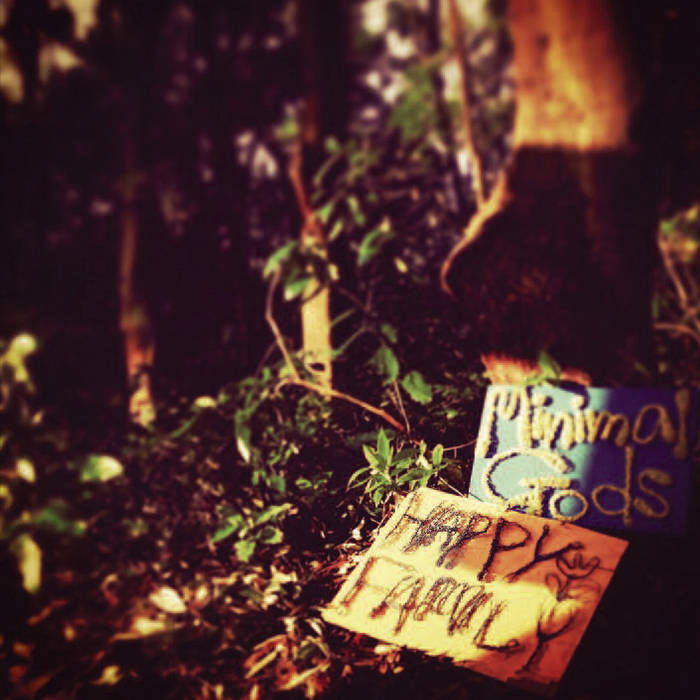 karlj Perfectly organised chaos. I've been a huge fan of Happy Family ever since I clocked enough listening time with Toscco to get acquainted with them.

guysegers This Band from Japan is excellent. On this record, it seems that they go for variation on loops a bit like King Crimson. But the energy is different, with a remarkable bass player who has a great sound !
The last piece looks like a quotation of the music they like.

Happy Family first appeared in the early 1990s as part of the explosion of exciting, underground bands that came roaring out of Japan at that time, such as Ruins, Bondage Fruit, Tipographica and Boredoms.

Reforming with 3 of the 4 members of the group who appeared on Tossco, 15 years later, they are back with a fantastic new release, Minimal Gods, and just as heavy and intense as they ever were and they still sound like no one else except Happy Family!

"It's time to offer up a hearty "welcome back!" to Japanese avant-prog quartet Happy Family. Listeners last heard from them on 1997's sophomore outing Toscco, and the band broke up the following year, re-emerging 14 years later in 2012 with three members of the Toscco lineup -- keyboardist Kenichi Morimoto, guitarist Takahiro Izutani, and drummer Keiichi Nagase -- joined by new bassist Hidemi Ichikawa. Morimoto, Izutani, Nagase, and Ichikawa hardly skip a beat between then and now as they extend the Rock in Opposition-influenced Happy Family sound into the 21st century on the group's third Cuneiform label release, 2014's Minimal Gods, a set of ultra-tight high-energy complex instrumentals complete with rippling keyboards, metal-crunchy guitar, gut-punching drums, and speaker-challenging deep Magma-esque bass. Literally speaking, however, Happy Family's complicated time signatures skip plenty of beats, beginning with the demented rhythms -- partly in 11/8 -- of opener "Slide," with Nagase and Ichikawa locking tightly together, Izutani Frippishly riffing and then throwing out choppy chords for Morimoto to toss back in counterpoint, and everything fitting together like crazily angled puzzle pieces. Amidst all this, Izutani still manages to nail a pair of brief but fiery solos to the skewed structure surrounding him. With its retro-squelchy keyboard tones and memorably catchy riff/melody, second tune "No Talent, No Smell" suggests a twisted but high-spirited form of proggy alien space funk, while Izutani's jabs of metal guitar, exploding over Morimoto's Present-like arpeggiated keys, bring a headbanging intensity to "Rodrigo." Headbanging in an irregular tempo, of course.

The album's first three tracks were penned by Izutani, and the momentum doesn't flag in the following pair of Morimoto compositions: "Portal Site for Sightseeing" finds Happy Family jamming out in 17/8 with unfolding chords, melodies, and solo interludes that take the music higher and higher before an abrupt finish; stretching past seven minutes in length, "Doggy-Human Contest" is densely packed with changeups to start but by its midsection has tumbled into a sort of trudging space-metal-blues over which Morimoto cranks out a synth solo suggesting the likes of Joe Zawinul, Sun Ra, and Ray Manzarek in equal measure. With its five-and-a-half-minute buildup to another slam-bang finish, Izutani's "Animal Spirit," in a relatively straightforward 7/8, is a strong companion piece to Morimoto's aforementioned "Portal Site," with a terrific solo from the guitarist over one of the album's most engaging grooves. After the band flirts with fusion on "Cat Riding on Roomba," Morimoto's "Celestial Illegal Construction" layers precise keys and guitars around and through its heart of typically off-center metal and space rock before the tune's incongruously stumbling -- even drunken -- coda, with Izutani and Morimoto still managing to end on a unison note. Izutani's concluding mini-epic "Feu de Joie" throws elements of Univers Zero, Pink Floyd, and even Tipographica-styled Zappa-isms into its sometimes cavernous mix, demonstrating that Minimal Gods still holds surprises even during its final moments. Now that Happy Family are back, here's hoping they plan to stick around." – Dave Lynch / AllMusic Guide