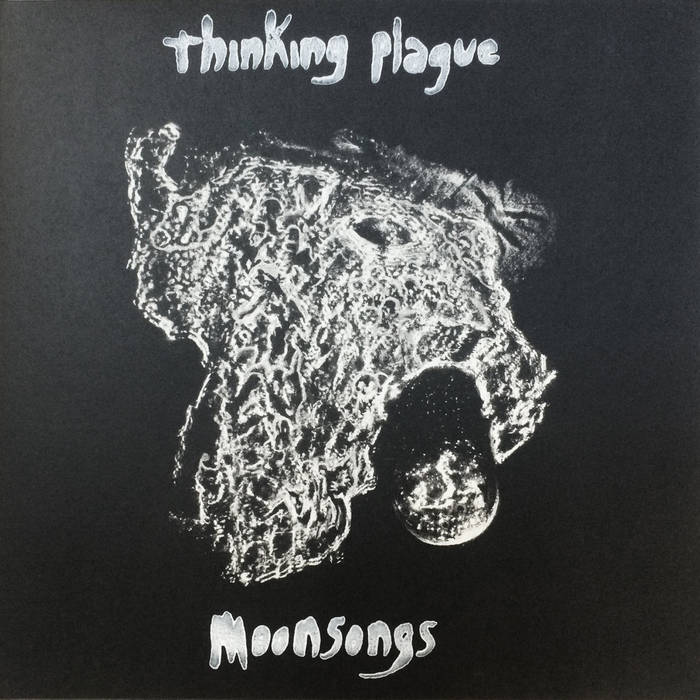 polarizeddisguisefan I am so happy to have stumbled across this album. It is unlike anything I've heard before and spellbinding from start to finish. The quality of the LP is astounding. One of the best pressings of any record I've ever purchased. Quality is unmatched. Favorite track: Etude For Combo.

IMPORTANT: THIS LISTING is so that IF YOU LIVE IN THE USA, you can buy the beautiful vinyl edition of "Moonsongs", released by our friends Jelodanti Records, who licensed this release from us.

IF YOU LIVE IN EUROPE, it will be much less expensive to buy it from Jelodanti themselves - tell them Cuneiform sent you!
jelodanti-records.bandcamp.com/album/moonsongs

This purchase is for this physical vinyl album. IF YOU WANT THE DIGITAL VERSION OF MOONSONGS, you can buy it here, where it is presented as half of "The Early Plague Years":
cuneiformrecords.bandcamp.com/album/early-plague-years

Originally released as a cassette on Endemic, the band’s label (Denver – 1986), and re-released as an LP on Dead Man’s Curve Records (London – 1987).
Reissued on CD by Cuneiform Records (2000) and reissued on hand printed vinyl in a numbered edition (what you are buying here) by Jelodanti Records (2020)

Bob Drake : Bass; drums and Linn Drums on 1; keyboards and
processing on 4, voice on 5
Mark Fuller : Drums on 2, 3 and 5; timbales and Simmons drums on 1
Eric Moon (Jacobson) : Keyboards on all except 4
Mike Johnson : Guitars, voice on 5
Susanne Lewis : Voice
Mark McCoin : Drums and percussion on 5; sampled airy flute on 1 and
voice syllables on 5 (using the Electro Harmonics
“Instant Replay” pedal)
with
Glenn Nitta : Soprano sax on 5
Fred Hess : Alto sax on 5

Produced by Bob Drake and Mike Johnson. Engineered by Bob Drake and Mark Derryberry. Recorded in Denver between 1984 and 1986 at Free Reelin’ Sound and The Yogurt Factory. Cover drawing (the wolf sphere) by Susanne Lewis. Remastered for this CD by Bob Drake at Studio Midi-Pyrenees, Caudeval, France in March 2000.


* Etude for Combo was recorded live in the “Yogurt Factory,” our old warehouse / rehearsal space / studio, before a small audience of friends, using just two microphones. The piece is heard here just as it was performed without editing or post-production alterations.


THANKS to Shirley Kinnealy, Arnie Swenson, Lois La Fond, Jill Sobule (regardless of subsequent developments), Patrick Bower, and all the others who helped, encouraged or put up with us.

This present edition & artwork, JELODANTI 2020.
Big thanks to Steve from Cuneiform, and to Mike & Bob for their trust!!