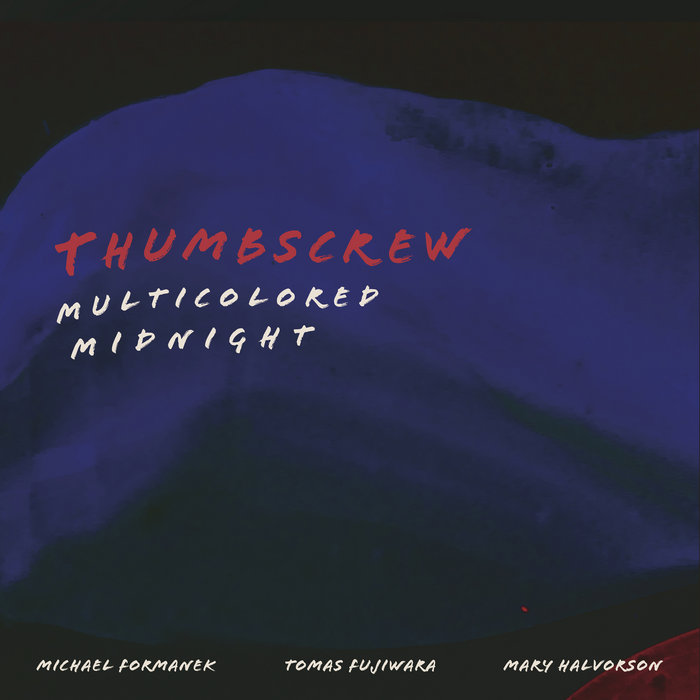 “Thumbscrew...are likeminded souls with decades of experience among them. Encapsulating a rare chemistry, their music offers a virtual masterclass of communal interplay.” – Point Of Departure


At the center of a spiraling musical universe, Thumbscrew is like a reverse black hole radiating brilliant constellations of overlapping ensembles. The all-star trio is at the core, and they’re marking their 10th year as a collective endeavor – 2022 – looking ahead to new sonic territory rather than taking stock of a prodigiously creative decade.

Celebrating this anniversary, Multicolored Midnight is the group’s seventh album, a set of 11 original pieces that oscillate between detailed composition, unbridled improvisation, and every gradation in between. It’s another step on an extraordinary journey by three of jazz’s most dauntless and resourceful artists.

The focus that each player brings to Thumbscrew and the dense web of experience they share is part of what makes the ensemble so extraordinary. Thumbscrew’s ongoing evolution is powered by a super-charged matrix of relationships, as all of the players also lead critically acclaimed bands built on the trio’s thrumming creative synergy. Beyond their work as a trio they’re the foundation for Formanek’s Ensemble Kolossus, Tomas Fujiwara & The Hook Up and Halvorson’s Thumbscrew bandmates are the foundation of her song-based band Code Girl. For Halvorson, Thumbscrew has become an invaluable creative foundation. “It’s one of my favorite rhythm sections to be a part of, the power and energy and everything we create together,” Halvorson said. “At this point, all of us have used this rhythm section as leaders.”

Multicolored Midnight features music that Thumbscrew honed during a three-week residency at City of Asylum, a Pittsburgh program founded as a refuge for writers in exile. Since expanding its purview to include musicians, City of Asylum has become the fourth wheel powering Thumbscrew’s all-terrain evolution as the triumvirate fully utilizes the sequestration to generate and refine new pieces. Three of Thumbscrew’s prior albums had also been generated at City of Asylum.
If there was an agenda for Multicolored Midnight, it centered on fully incorporating Fujiwara’s vibraphone work into the mix. Marking a decade doesn’t have quite the same panache as a diamond jubilee, “but we do feel like it’s a big deal,” Formanek said. “That’s a lot of time for a cooperative band, and the residencies are a big part of what’s allowed us to dive in deeper and keep creating new music.”