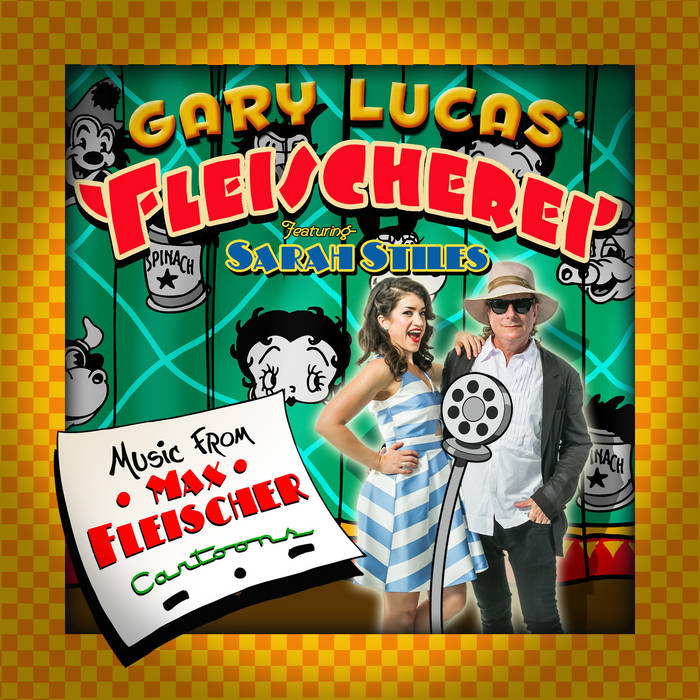 A fun, foot-tapping album of light jazz in the style of the old cartoons. There are beautiful arrangements and the songs are sung nicely by Sarah Stiles. For a full description of the album, read the notes below the track listing.
The instrumental breaks in the songs are charming. Sarah Stiles' phrasing is perfectly comical. She does a great job.
The album grew on me, although I have inherited an appreciation of jazz from my father.
A lovely sounding, well crafted album.
Well done. Favorite track: The Music Goes Round and Round.

Next to Walt Disney, Max Fleischer is the best-known animator of the 20th century, creating and contributing to American culture the one and only Betty Boop. Fleischer Studios also brought the newspaper character Popeye The Sailor and all the characters of that universe to (animated) life.

Guitarist Gary Lucas, whose dauntingly eclectic career encompasses a formative stint with Captain Beefheart, a collaboration with Jeff Buckley very early in Jeff's career and a recent duo album with underground singer/songwriter legend Peter Hammill was once called "the guitarist of a thousand ideas" by The New York Times. Lucas has long been a fan of Fleischer's work and has wished to develop a band to present the music that was used in these cartoons.

The music and era conjured up by the group is a gleaming confection from a hurly-burly era when the Jazz Age crashed into the Great Depression and Tin Pan Alley borrowed shamelessly from Harlem. To create the small band arrangements, Lucas enlisted virtuoso trombonist and arranger Joe Fiedler to craft zingy, modern-but-historically-grounded arrangements and to bring in a brilliant group of players, each one at home with the traditional as well as the exploratory: saxist Jeff Lederer, double bassist Michael Bates and drummer Rob Garcia.

Casting the cats was the easy part. Finding a singer who could capture the insouciant spirit of these characters while comfortably inhabiting the material proved far more difficult. Lucas turned to his wife, a New York City casting director, who said, "why don’t you let me cast this one?" "That was a good idea", Lucas says. Tony Award-nominated, musical theater vocalist (on and off Broadway) Sarah Stiles, who embodies both the sophisticated and sexy Betty and her gawky, neurotic, loveable counterpart, Olive Oyl, was clearly the right choice. "Sarah is really a bundle of fire who can do it all. It was crucial to find a singer who wouldn’t try to hijack the idea and make it about her." Part of what makes Stiles such a perfect fit for the material is the way she captures the spirit of the characters. It’s immediately obvious when she’s singing a song associated with the effervescent Ms. Boop and when she’s donning the slippery guise of Ms. Oyl.

Hewing closely to the original scores, Lucas and his crew summon a lost world of rent parties and Yiddish music halls, Vaudeville emporiums, Broadway revues, and even klezmer dance parties. With Fleischerei Lucas, Stiles and group have created a particularly vivid and entrancing realm, a musical world that’s uncannily familiar and tantalizingly foreign like only the past can be.