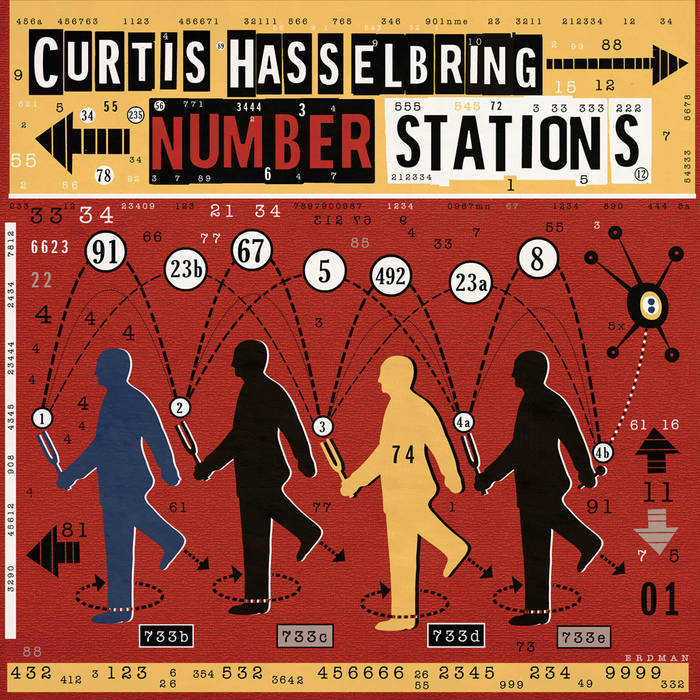 jeff oaster Equally creepy and upbeat, Hasselbring really does get an All-Star lineup together here.

"A number station is a type of shortwave radio station characterized by their unusual broadcasts, which consist of spoken words, but mostly numbers, often created by artificially generated voices reading streams of numbers, words, letters, tunes or Morse code. They are transmitted in a wide variety of languages and the voices are usually female, although sometimes men's or children's voices are used. It is widely assumed that the broadcasts are used to send covert messages to spies." – Wikipedia

Number Stations are shortwave radio stations from around the globe that broadcast random series of numbers intermittently, often read by a female voice. They are widely believed to be a cold-war artifact by which clandestine agents receive instructions. The titles of the pieces of this recording are hypothetically decoded from the numeric information stored in the composed music and serve as cryptic instructions for the musicians in the ensemble.

Intrigued and inspired by the mystery and fascination of these mysterious broadcasts, trombonist/composer Curtis Hasselbring leads an all-star septet which features these major players: Mary Halvorson (guitar), Trevor Dunn (bass), Matt Moran (vibes and marimba) and Chris Speed (tenor sax and clarinet), both of The Claudia Quintet, and dual drummers Ches Smith and Satoshi Takeishi.

Number Stations is comprised of a brilliant set of pieces that display all of the great, singular attributes these preeminent musicians have to offer, with the unusual instrumentation ideally suited for Hasselbring’s fascination with patterns that expand, contract and decay. In a sly echo of Spy Vs Spy skullduggery, the group often plays elements of the ensemble against each other.

Hasselbring’s pieces are highly propulsive while at the same time maintaining a degree of dark humor, ambient spaciousness and highly coordinated ensemble playing. The music has elements of new jazz as well as new rock and has wide appeal beyond just the hard-core jazz audience.

Nothing better illustrates the vaunted position Hasselbring occupies in the New York new music community than his ability to corral so many brilliant and sought after players to be a part of his ensemble!

"Many avant-garde composers, leaders or conductors employ various mechanisms to instruct the band for a specific composition. Here, longtime New York City alternative composer, trombonist Curtis Hasselbring integrates an all-star lineup for pieces inspired by a random series of numbers, based on shortwave radio stations. Hasslebring iterates that these pieces are hypothetically decoded and provide cryptic instructions for the musicians. However, the album is anything but cryptic as the leader bridges the jazz-rock idiom with New York City downtown scene-like ingenuity amid unanticipated aberrations, solid rock cadences, booming pulses and multileveled montages that often deliver a KO punch.
Hasselbring and associates hit all the right notes and fuse a very complex mindset into a vastly entertaining endeavor that increases the program's breadth, offering a consolidated view of many musical worlds." – AllAbout Jazz / Glenn Astarita

All music composed by Curtis Hasselbring.

All artwork by Steven Erdman.

Number Stations by Curtis Hasselbring and the New Mellow Edwards has been made possible with support from Chamber Music America’s 2010 New Jazz Works: Commissioning and Development program funded through the generosity of the Doris Duke Charitable Foundation.

Find out more at www.curha.com.