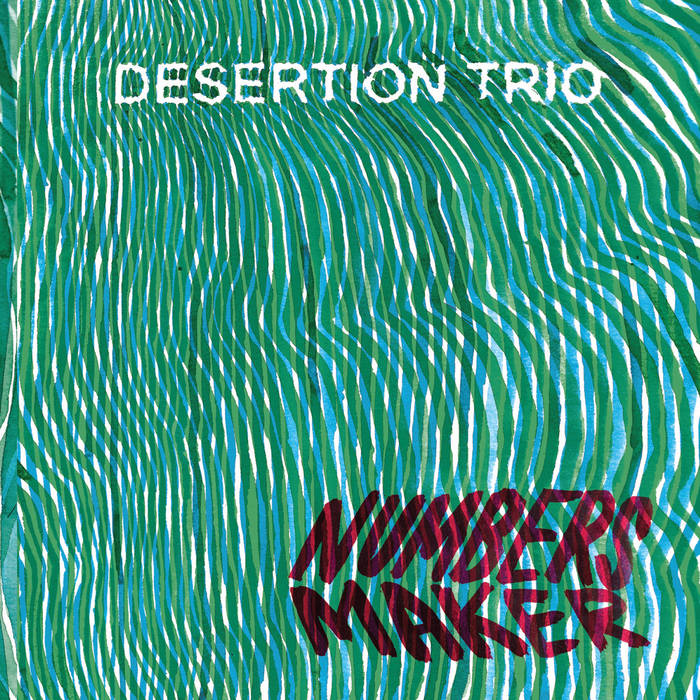 Kevin Bud Jones The intensity, invention, and interplay on this release is tremendous. Nick Millevoi is capable of playing any style of music and owning it.

PDD I agree with all of the descriptions provided above. But I also hear a very dark version of the late guitar master Danny Gatton. Favorite track: Numbers Maker.

From the first notes of Numbers Maker, the third album by Desertion Trio, it is clear that the band is leaning into a new direction. While the band has always been a three-piece, Desertion Trio have brought along friends on their previous records — making Numbers Maker their first true trio release and giving the album a distilled and darker edge that hits a little differently.

Although Desertion Trio is following a new musical path, the sound of the band — described by the Philadelphia Inquirer as “exploratory, distorted, and warped” — is still recognizable, using angular riffage, tumbling grooves and a debt to the darker side of Miles Davis’ electric bands, Funkadelic guitar-maestro Eddie Hazel, and oblique fisheye references to 1960s spy and surf guitar themes, while the collective always is shooting for the stars with sprawling and effected tones.

In order to celebrate the spirit of a power trio in its natural state, Desertion Trio recorded Numbers Maker in front of a live audience at New Haven, CT’s Firehouse 12 studio. The result is a detailed studio recording that finds the band all-in with no overdubs and no re-takes, capturing the energy of a great live ensemble.

"Numbers Maker is intense and unrelenting. Its single-minded focus summarizes where the trio has been, albeit with a new vocabulary, and lurches forward to embrace a more direct method of communication that adds a prominent place for surprise to their already prodigious improvisational acumen and visceral power." – AllMusic

“...the band’s tunefulness and delicate touch—even during its most punishing passages—have a universal profundity that I’ve been unable to resist." – Chicago Reader

"One of the finest new releases on Cuneiform. An excellent album by a highly creative experimental fusion trio, somewhat recalling the innovative jazz & rock albums of 1980s ECM." – Audion

Mixed and mastered at Menegroth by Colin Marston.

All songs by Nick Millevoi, copyright 2020 Circlesperanto ASCAP, except “Taboo” by Margrita Lecuona and Al Stillman.