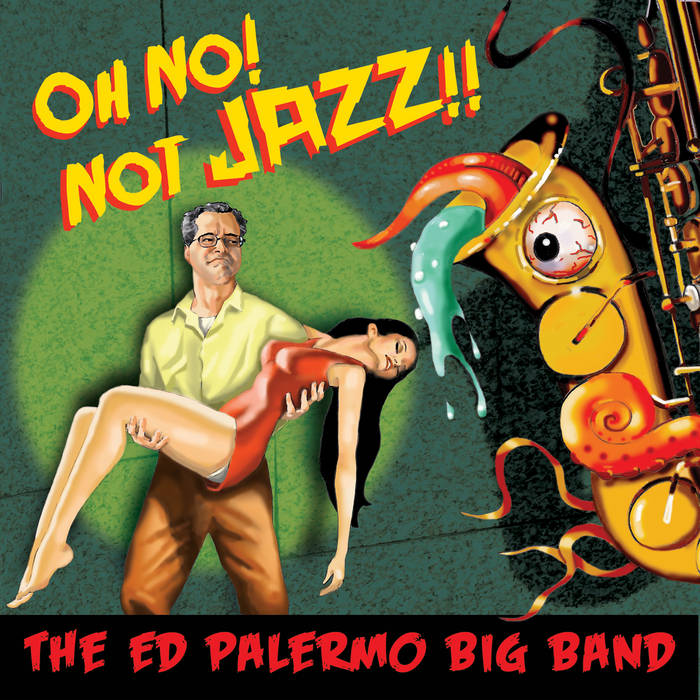 Nick Bradey good , indeed excellent, interpretations of classic Zappa , and superb original compositions.if you have any interest in the Zappa legacy do not neglect this .

Propeller Kuh oh my! do I love theses Zappa renditions! they are fresh, played with utmost fun and re-interprete them like they should nowadays.

The Ed Palermo Big Band is led by alto saxist and arranger Ed Palermo; he has had this big band with much of the same personnel for over 30 years, which is a hugely impressive feat in itself, and has had his band performing the music of Frank Zappa for 20 years.

The band is a 18 piece ensemble of five woodwind players, four trumpeters, three trombonists, two keyboardists, guitar, violin, bass and drum. There are a number of ensembles performing the music of Frank Zappa, who, 20 years after his death, is now recognized as one of the greatest American composers of the 20th century, but no one does it with the ease, skill and originality that Ed and his band do!

'Oh No! Not Jazz!!' consists of two albums of musical performances. The first album (tracks 1-8) further explores Ed's distinctive, big band interpretations of the music of Frank Zappa and for the most part, he concentrates here on Frank's initial burst of creative works from original Mothers Of Invention era of 1966-1970. In addition, two notable pieces are performed here. One of Frank's most loved works, Inca Roads, with a vocal by guest Napoleon Murphy Brock contrasts with one of his most 'notoriously difficult' works, The Black Page #2. All of the performances and arrangements of these great pieces are fun, musically witty and masterful. The second album (tracks 9-19) features Ed's own colorful compositions, which are here featured on a recording for the 1st time in over 25 years!

This double album shows that despite the financial and practical difficulties of running a large sized band, that the very fact that there are so many musical voices in a big band allows for showcasing arrangements better than any other vehicle. This is an exciting listen for fans of Frank Zappa and all adventurous rock and jazz music.

Bob Quaranta: acoustic piano + adorable twin daughters, one of which prefers dental surgery to the EPBB

Ben Kono: 2nd tenor sax, flute, oboe, devilish good looks but only by comparison to the rest of the EPBB

Charles Gordon: lead trombone, Jewish, but only in comparison to Ben Kono and Barbara Cifelli

Joe Fiedler: 2nd trombone, but much taller than the lead trombone player

Ronnie Buttacavoli: lead trumpet, devout Catholic but not according to the nun he slapped as a child

Bonnie Buttacavoli: 3rd trumpet, cousin of the devout Catholic but refuses to confess to that transgression

Producer: Bruce McDaniel
Executive producer: The sax monster who gobbled up Katie Jacoby on the back cover of this CD. If I give you more royalties, can we have Katie back? Just puke her back up.

Artwork by Nancy Palermo.
Photos: all selfies by the Ed Palermo Big Band.