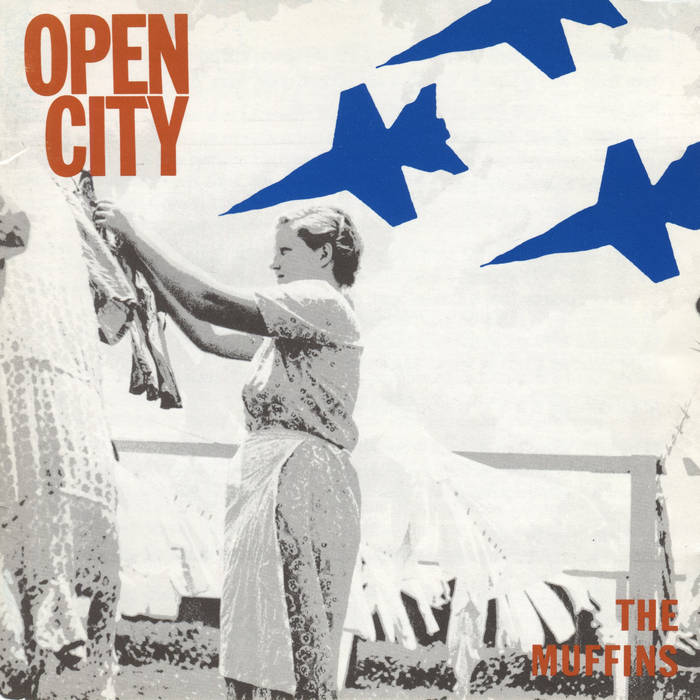 Open City is all previously unreleased performances from 1977-80, by the "classic quartet" version of the band. Includes an outtake from Manna/Mirage, excellently recorded live pieces not found elsewhere, their incredible final demo tape, and two superb outtakes from Fred Frith's Gravity lp.

The Muffins story begins in the fall of 1973, with the break up of a Maryland band called Tunc. Former members Dave Newhouse and Michael Zentner decide to form a new band. At the same time, Billy Swann happens to pick up a friend of Michael's who is hitch-hiking with a guitar case. Naturally, the conversation centers on musicians and local bands, and Billy learns about Michael and Dave's band. Billy contacts Michael, and they set about to work over the winter, creating a new polyrhythmic music. Dave, Billy, and Michael all move into a large farmhouse in (then very rural) Gaithersburg, Maryland. The new group goes nameless until one day, while the three argue over potential names, a friend enters the house, loudly shouting, "The Muffins are here!" and bearing a tray of hot blueberry muffins as a housewarming gift. The well-wisher's timing is perfect and the band becomes The Muffins.

A number of drummers come and go over the next few months. In the summer of 1974, multi-reedist Tom Scott (from the Virginia based group Black Orchid) joins and eventually moves into the Gaithersburg band house. Dave writes original material, their sound comes together bit by bit, and the band rehearse steadily, practicing four nights a week. The Muffins' communal lifestyle and heavy practice schedule continues for many years, leading to their intuitive musical interaction.
In early fall, 1975, drummer Stuart Abramowitz joins the band. The rock energy of Stuart's drumming compliments the bands more cerebral compositions. The Muffins' sound tightens into a distinctive personality, although influences of bands like Soft Machine, Hatfield & the North, and The Mothers of Invention are still evident. They record studio and home demos in late 1975 and early 1976, none intended for release, but the majority of which would later be released as "Chronometers" (Cuneiform 55007).

In mid-summer 1976, the band undergoes a major shakeup in personnel. On July 9th, they play their last show with Stuart and Michael. On the verge of dissolving altogether, Tom pushes hard for them to remain together as a group. They continue rehearsing as an improvising trio, even playing a few shows with this three piece line-up.

Improvisation was always a vital ingredient in The Muffins. All three played or worked in improvisational settings before the Muffins, and Billy and Dave are both fans of "energy" jazz, Sun Ra, and the AACM movement. From the earliest days of the band they would always feature one or two improvisations in their sets, but this period as a trio really forges the group into an improvising unit.

In the fall of 1976, they meet drummer Paul Sears. Paul's powerful, intricate style is exactly what the band needs. The new quartet immediately gets to work, improvising and slowly developing new compositions. They decide to drop the almost two hours of older material and start fresh.

The first gig with this new line up (Billy, Tom, Dave, and Paul) took place at American University in Washington, DC on October 2, 1976, playing with another suburban Washington band: GRITS. By the spring of 1977, The Muffins have about an hour of written material. Their concerts in this period feature a 50/50 mix of written material to improvisation.

Throughout the years, members of the Muffins surround themselves with other musicians. They work with friends and encourage them to form bands reflecting divergent styles of music (free improv, space rock, etc.). During the summers of 1976-77, they sponsor free concerts every weekend in the field behind the Gaithersburg farmhouse, which are usually attended by anywhere from ten to a hundred people. Immersed in music, their next natural step is to form a record label to release these new sounds: Random Radar Records.

Eventually they leave Gaithersburg and move to a house in nearby "suburban" Rockville. Throughout much of 1977 they record their first LP, "Manna/Mirage," (Cuneiform 55004) on Tom Scott's recently purchased Tascam 8-track. While a little "slicker" than their live sound, "Manna/Mirage" captures the charm of the band in this period quite well. The record's biggest drawback is a weak mastering job, which amplifies the technical deficiencies of the home recording. The "Manna/Mirage" period is the band's popular peak, as they play out more frequently than ever before or after.

They continue to rehearse four nights a week, though they never average more than 10-12 shows a year. "Manna/Mirage" receives positive press and college radio airplay. With the help of a postcard enclosed in each album, they begin to assemble an amazingly diverse mailing list, from places as far away as Hong Kong and India.

In mid 1979 they record and release their second LP, "Air Fiction" featuring all improvisations: one side live, one side home studio recordings. With the help of their mailing list, they offer this recording exclusively to their fans via mail order in a limited edition of 1,000. Hastily recorded and assembled, it shows the least attractive and thoughtful side of their improvisations.

By late 1979, The Muffins' sound is evolving and changing. The more gentle jazz-rock stylings of their sets are giving way to a harder-edge sound. Billy is given an incredibly cheap ($15.00) electric guitar which he tunes completely idiosyncratically and uses in a unique fashion. Dave is playing less keyboards and writing pieces for two saxes, bass and drums. Fred Frith (from the British band Henry Cow) moves to New York in the late 70's and becomes a great fan and friend of The Muffins, providing stimulus and influence. A long time champion of the band, Fred Frith features them as a backup band on his popular solo LP "Gravity" which brings their name to many new listeners.

By late 1980, frustrations are mounting. Years of hard work are definitely NOT paying off. By the time they are ready to record their last studio album, "<185>" (Cuneiform 55013), there is enough disagreement and tension about recording it that they decide to use Fred Frith as producer, deferring all production decisions to Fred.

Within three months of <185>'s release they disband. Their final show is at Penn State University in State College, Pennsylvania during the spring of 1981.

All tracks except 8, 9 & 11 were recorded without overdubs
Tracks 8 & 9 are outtakes from "Gravity" by Fred Frith