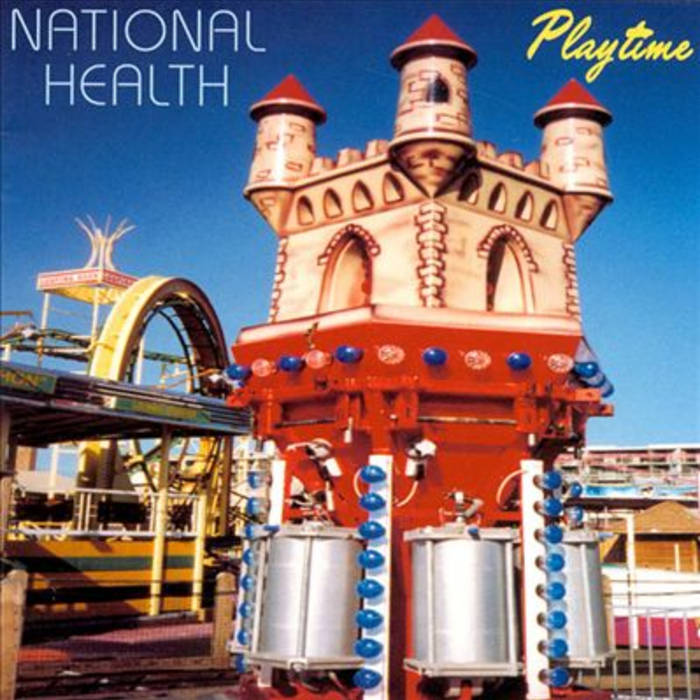 National Health was one of the last of the great "Canterbury-style" progressive rock bands. By late '70's, the personnel had become Alan Gowen [keyboards], Phil Miller [guitar], John Greaves [bass & vocals] and Pip Pyle [drums]. This version strove towards a more stretched-out, free-er approach.
As Phil remembers it, "Basically, we did less writing and more playing." Indeed, this version of National Health did more gigging that any other lineup of the band. However, it never released any studio or live recordings. Alan Gowen died of leukemia in May, 1981. This album is the first National Health live album to ever be released. It is also the only recorded documentation of the Gowen ,Greaves, Miller, and Pyle version of the band.
Recorded at two different shows in 1979 - including one show that features the addition of guest guitarist Alain Eckert [Art Zoyd] - the majority of the compositions on Playtime cannot be found on any other National Health recording. A fantastic, unexpected, newly unearthed document 20 years later, of a much loved band.

"A more stretched-out, jam-oriented affair than the original studio recordings, Playtime picks up on some of the furious, frenetic energy of the early fusion movement, when bands like Tony Williams Lifetime and the original lineups of the Mahavishnu Orchestra and Return To Forever were going straight for the jugular with raw burn, tempered with intelligent writing, strict ensemble playing and audacious, chops-oriented playing. This is first rate, risk-taking jazz rock created in a bygone era by a greatly under-recognized band."
- JazzTimes.


After digging up archive material from Gilgamesh in 2000 (see Arriving Twice), the Cuneiform label started 2001 with a much-anticipated live album by another legendary Canterbury band: National Health. Playtime comprises material taken from two 1979 shows, one in France, the other in the U.S. The CD documents the last period of the band following the release of its second LP Of Queues and Cures, after keyboardist Alan Gowen had returned to replace founder Dave Stewart. Ex-Henry Cow bassist John Greaves, guitarist Phil Miller, and drummer Pip Pyle round up the lineup and all contribute written material. French guitarist Alain Eckert joined the band on the first show.
Only two pieces from National Health's previous repertoire were performed at that point and are included here: Miller's "Dreams Wide Awake" and Greaves' "Squarer for Maude." Other songs come from Gilgamesh's book ("Flanagan's People" and "Play Time") or would be included on future solo or related projects....
The playing is stellar and the music is very complex, always on the border between progressive rock and fusion jazz. There are flaws on the tape of the French show, but the U.S. show is crisp with wide dynamics. The intensity reaches a peak on the title track, which alone could have justified the whole project.
As a bonus, [Canterbury historian] Aymeric Leroy supplies valuable historical background and details on the band's last months of existence. Canterbury-prog fans will find Playtime a must-have..."
– AllMusic