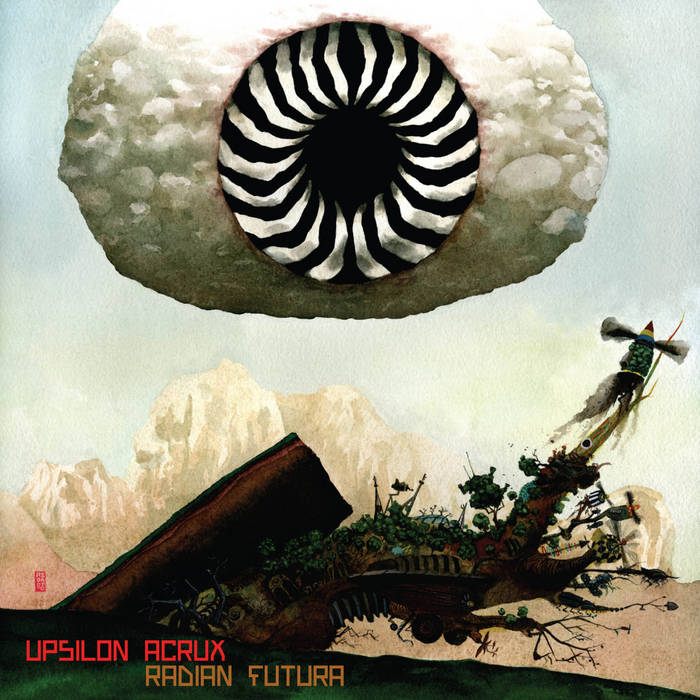 Christopher Moklebust Upsilon continues their poetic mayhem with Radian Futura. Like all their music, contained within it is a ride through an ever inescapable landscape of abstractivity - and quite the ride it is! Check it out, if you dare. But don't say I didn't ware you...

"...a stunning example of both virtuosity and clever composition...amazing, and amazingly consistent...."
– All Music Guide

"Seldom is music so challenging also so easy to listen to."
– Prefix

"...there’s something revitalizing about hearing a band like Upsilon Acrux hitting their stride...."
– Dusted

"Active in various configurations for a decade, the SoCal quintet condense hundreds of ideas into an instrumental supercollider and keep them vibrating on the brink of fission. The result is scary. The compositions -- spun with tight intensity by two guitars, synth, bass and drums -- link and overlap fragments from all over the musicsphere: Zappa carnivalations, Television accelerations, science polka, metallic fury, distant reggae. It’s nervous, sparky, often dissonant but more listenable than you’d think, even the 28-minute “Transparent Seas,” a work of symphonic scope spanning from switchback blasts to crushed nobility, with an elegant waltz in the middle so you can catch your breath...Strong cover art, funny song titles (“Keeping Rice Evil”) -- it’s hard to fault Upsilon Acrux except to wonder why they limit their audience to smart folks obsessed with metal/punk/art imaginings by fringineers.... Most of us come to music when we want to get drunk and screw; Paul Lai and his cabal get out their axes when they want to drink espresso and do calculus. Takes all kinds. Fortunately."
- metaljazz.com

"Radian Futura is this Southern California-based quintet's sixth album, and is steeped within multipart metrics, engineered upon an astonishing range of odd-metered time signatures. The band's explosive gait summons, at times, notions of a hyper-mode spin on the common man's vision of progressive-rock, amid guerrilla tactics and daring, rock-in-opposition type proclivities.
Upsilon Acrux conveys the utmost in discipline and regimentation via these intensely executed compositions. Moreover, the musicians dish out a labyrinth of captivating perspectives with swirling unison choruses and the guitarists' seething crunch chords. Their modus operandi involves a constantly shifting paradigm of resonating prog-rock frameworks, also including the rhythm section's driving backbeats. With thrusting grooves, and split-second deviations, the group also throttles back the pulses, and then revs it all up akin to a drag racer getting the green light.
It's a unit that lives on the edge, as the group implements a few scare tactics, while occasionally tempering the flow with ethereal passages in such a way that might hint at contemplation, or a method of regrouping. However, the twenty-eight minute "Transparent Seas (Radio Edit)," is the ensemble's magnum opus, in which Phil Cobb's melodic and quasi-psychedelic keys intimate a drifting theme. Yet the artists gravitate towards a climactically driven sequence of events, marked by swirling and tumultuous movements, and amplified by Chris Meszler's monstrously polyrhythmic drum solo.
The program seemingly proceeds at the speed of light, and its not casual listening by any stretch. Like a cinematic action-packed thriller, the storylines become increasingly involved as the plot contracts and expands. Either way, it's a mesmeric journey into a vastly populated musical wonderland."
– All About Jazz

Upsilon Acrux's music is demanding on many levels, but mostly it demands that you listen to it a number of times before forming an opinion, because only after you've gotten familiar with it can you get past the sheer complexity and onslaught of it all and hear the amazing musicality of what they are doing. This combination of blazingly fast, interwoven musical lines delivered at blinding speed mixed with their unique melodic sense makes Upsilon's music instantly recognizable.

They are one of the most creative and original of the shockingly large number of great post-punk, avant-garde rock bands today. This is their sixth album of explosive, intense and surprisingly beautiful intricate, instrumental rock.

In memory of Weber.