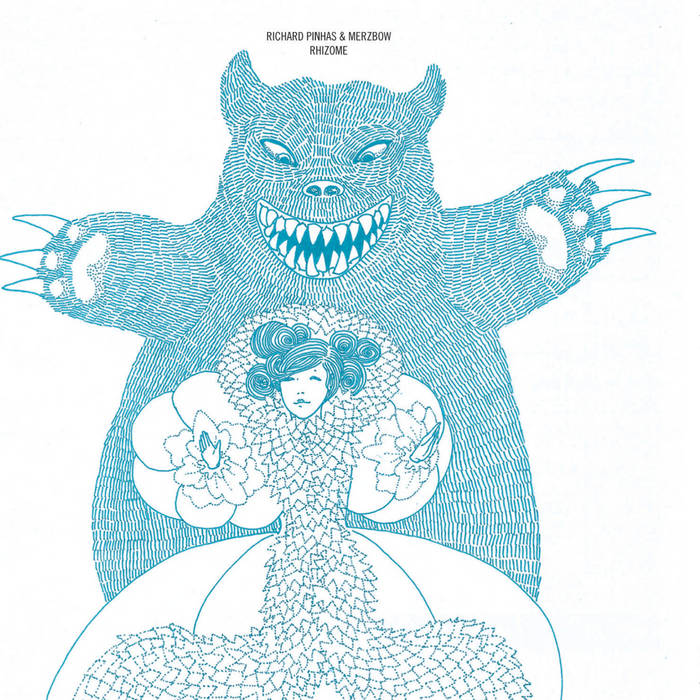 "A surprising meeting of minds and one of the strongest CDs I've heard in a while." – Musicworks

It's interesting that Brandon Wu compares the work of Richard Pinhas and Merzbow to Fripp and Eno. At the time it was recorded, No Pussyfooting was considered to be practically 'noise' (sound familiar?) and Robert Fripp has gone on record about how the record label didn't want to release the album because it would affect the commercial impact of these artists. Yet, with time, the work the duo did was absorbed into the greater musical universe - if not into the mainstream - and its influence continues to this day.

While it's never safe to predict the future, perhaps the unlikely but also quite logical meeting of Richard's billowing clouds of guitarwork with Masami's well considered sonic assault will also prove to be influential upon the larger musical universe. In any event, this recording from September, 2010, expands upon their first studio meeting, Keio Line and offers an obvious follow-up, as well as new twists to the sound.

"Well blow me sideways! This album blew me right out of the water, and while I have had a long time love affair going on with Richard Pinhas and what he did with Heldon, his newer releases have somehow escaped me completely. I've never taken the plunge, but boy am I glad I did!

On this highly intoxicating release he works together with Japanese noise artist Merzbow, who is (in)famous for being too loud and abrasive for people over 25. I know, because I've had similar thoughts and preconceptions about him, and never really cared to take a chance on his power white noise electronics. So what we have here is actually my Merzbow cherry being popped as well as my initiation into the modern French Frippertronics shaman - Monsieur Pinhas.

I expected this to be grinding, abrasive, jarring, avant guarde and noisy like a broken robot practising kung fu from the insides of a skip, and what I got was a voyage into these soothing and relaxing musical oceans - that had me cursing and shouting at myself for being so uptight and narrow-minded - not having the courage to sample this collaboration earlier on in the year. Sometimes the hardest boundaries we face, are indeed the ones we conjure up ourselves for no reason whatsoever other than perhaps latching on to our fake and hollow safety nets. Futile I say!

Pinhas sounds better than ever, sling-shooting himself around these orbital sound textures - like the Icarus likened flight of Apollo 13 conveyed in guitar sorcery. He plays that thing with the confidence of an old man who trusts nothing else than music, maybe because it never deceives, but that's for another written essay altogether, - and yet what strikes me the most about this man's playing, is his will to push the limits and add to the music that little extra - making it intensify, loop, shrink, dissolve or transform into these immense tunneling vortexes of shimmering sound. Some of this is distorted and muddy - akin to Lou Reed's Metal Machine Music yet highly ethereal and fruitful without ever coming across like music you'd use for interrogation or as paint peeler. Other times the guitars take on the character of electric howling wolves - crying out in the most beautiful and yearning way - almost loosing its natural timber in the process for something completely different, which is what in the end colours this album in a kind of otherworldly shine. These almost frightening overpowering inhuman electrified wolf howls slicing through in the music - reaching for the skies in icy cathedrals of sound. Beautiful like knives of glass.

Merzbow is the carpet supplier. He weaves the Persian rugs here, which in all fairness are nowhere near your every day rugs - these are dense as rainforests and thick like maple syrup all at the same time - y'know those carpets that grab you - holds you in threatening to smother you in woolly harshness of floor pillows and eiderdown thickets. The electronics emanating from this guy is like electronically charged drizzle - electrified raindrops that are so small and minute - yet so extreme in numbers that you have an entire surface upon surface upon surface of these electronic drizzles - multiplying and zooming in and out of a seemingly ever changing rainy day flickering mosaic. Combined with what Pinhas is trying to do with his yearning fuzzy guitar experiments, somehow these drizzles put their arms around you like warm summer rain - comforting and nurturing you like manna from the heavens.

This album is like mermaid music, or maybe like worming Japanese eiderdown tunnelling raindrop music coming from underground and upwards - always upwards. It's fizzing like a sparkling soda-pop - feels like putting your head too close to the bottle after removing the cap - getting showered in all these bubbling stenches whilst hearing the miniature sounds of the jumping gassy water calling you from the surface of the drink: We are the bubbles!!!! 4.5 stars and maybe more in time. What a beautiful album!" – progarchives