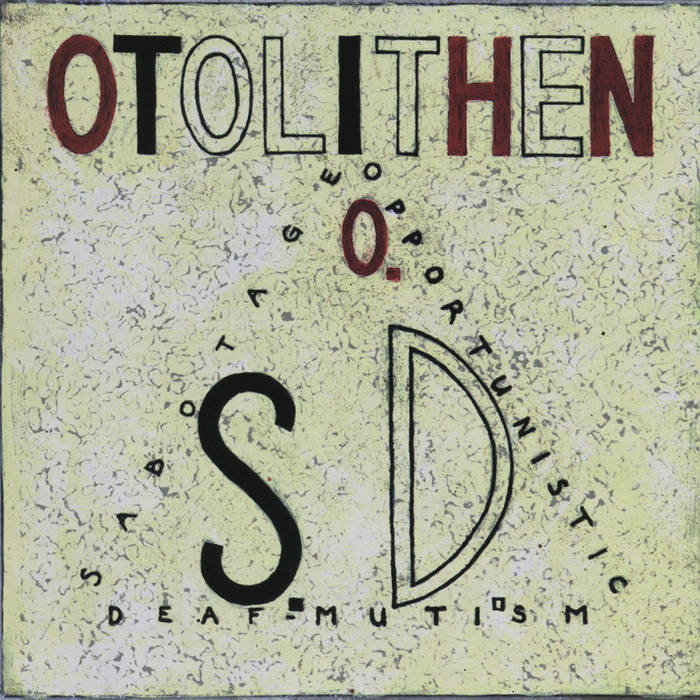 Otolithen was formed as a duo in 1993 by Päd Conca of Switzerland and Dirk Bruinsma [Blast] of The Netherlands. Within the duo, Conca plays electric bass, home-built string instrument, effects and foot triggered percussion, and Bruinsma plays electric guitars, soprano sax, foot triggered percussion and vocals.
Bruinsma and Conca describe their goals in Otolithen as "trying to go for the extremes of what you can do with just a duo." As part of their attempt to push the format's boundaries, their compositions explore the possibilities of playing simultaneously with both hands and feet. With their feet producing the rhythms by triggering percussion samples, their four feet act as Otolithen's drummer, greatly expanding the range of music that a duo can perform.
Difficult, composed, sophisticated music that is reminiscent of Skeleton Crew [due to the line-up] performing the songbooks of Tim Hodgkinson or U Totem [due to the complexity of ideas presented here.]

"Otolithen is a very busy-sounding duo. Dirk Bruinsma takes care of guitar, saxophone, and occasional vocals (on two of the 15 tracks), while Päd Conca handles electric bass, effects, and percussion, the latter thanks to a homemade foot-trigger system.
Fans of Bruinsma's band Blast will feel at home on S.O.D.; Blast's chamber rock and rock-in-opposition stylings can be found everywhere on the record. References to Skeleton Crew, Henry Cow, and mostly U Totem are also in order. Bass (often heavily distorted) and guitar take center stage in these thoroughly written pieces.
Otolithen's language is based on rock but a lot more complex and always with a calculated chance factor at play, a part of instability (the same way Henry Cow's rock motifs were always decentralized). Five short improvisations, bringing contrast, are scattered throughout the album. S.O.D. can take many listens before it unveils all its beauties." – Francois Couture / AllMusic

Recorded and produced by Otolithen.
Mixed by Bob Drake and Otolithen.