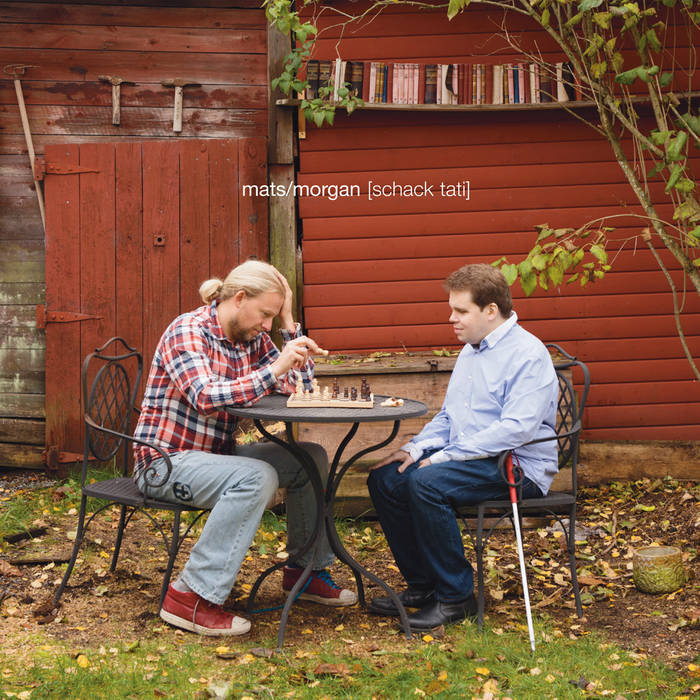 Hardo Zappa with keys drums a computer and electronics.

Keyboardist Mats Öberg and drummer Morgan Ågren have worked together for 3/4s of their lives. Both were childhood prodigies who have grown into adults who are considered absolute masters of their instruments and they have continued to work together since meeting 40 years ago in 1981. The presentation of their music has evolved greatly over these years, from early duo experiments to a Zappa cover band to actually meeting and performing with Frank Zappa and band, to a quintet lineup of their band, to a keyboard/bass/drums trio and now, with their 1st studio release in nearly a decade, they are back to a duo line up.

Their music itself has also greatly changed over the years; for musicians who are both best known for being absolute virtuosos, over the last decade or so, their music has gotten more easily absorbed and even more contemporary, with the duo being greatly influenced by the currents of electronica, and adding that sound to their jazz/rock, complex rock, avant-garde roots.

The dizzying mix of sounds that whirls its way through Schack Tati (with typically wry humor, the title is a pun on the Swedish word for "chess" and one of the duo's favorites, the French filmmaker Jacques Tati) was years in the making. Morgan discloses, "In 2006 I moved to a house in the Swedish archipelago. Our garden had a little house in it, which I rebuilt as a studio. This was a fantastic chance to have a good studio nearby. So I spent endless hours building it up, changing gear, testing a million microphones, preamps, etc. After quite some time, I had a really good studio. It is also the first time that I’ve had access to a studio that close to where I live. During the last four-five years, I also spent a lot of time recording for others.... But all the rest of the time, I spent recording for myself."

The tracks Mats and Morgan toiled over in that rather idyllic setting have an air of endless possibility to them, making possible the disparate stylistic strands of the band's sound to wind together with nary a tangle. From a Terry Riley-plays-Eurodisco stomp to glitchtronica-gone-fusion , languid-then-complex ambient jazz-into- 21st century classical, to Zappa-in-a-meat-grinder intensity -- it's hard to envision another set of circumstances under which Schack Tati could have come together.

Yet for all of the album's eclecticism, there's an odd kind of coherence to the whole thing. Morgan light-heartedly observes, "This one is more focused -- my wife says -- but it is. We got a bit older. And our sound got better. Everything got better maybe!" Musical maturation is probably one piece of the puzzle, and the indefinable essence of the archipelago is another. But at the core of what makes Schack Tati tick, you'll find two titanic talents. Morgan is a world- class musician, a "drummer's drummer" who has played with everyone from prog-metal master Devin Townsend to electronic innovator Squarepusher in addition to his achievements under the Mats/Morgan banner. And Mats is a sui generis artist -- he's the only one around who can do what he does, let alone understand how its done, melting genres into each other at will and alternating between fleet-fingered solos and richly atmospheric textures. Ultimately, then, Schack Tati is about friendship, magic, individuality, and a willingness to wander wherever the muse might lead.


"Swedish keyboardist Mats Oberg and drummer Morgan Agren (both are actually multi-instru- mentalists, with gentle assistance from others here and there) have played together for more than 30 years, creating something that can sound like a wound-up rubber band, emphasis on the band. And the oddly titled [schack tati] is their first studio album since 2005’s Thanks For Flying With Us.
You might feel like your finger’s been put in a live socket early on. In fact, it isn’t until “Mr. Piccand,” track four, that the electronic wizardry takes a break, and we get a dreamy, almost rhapsodic melody stripped of meter and forward motion. “Mr. Piccand,” the longest piece on the CD, is still all electronic, but that doesn’t mat- ter because the way they play this music is almost classical in their use of technique, repose and the music being the total opposite of everything that came before. “Mr. Piccand” sets up the rest of [schack tati], meaning don’t assume anything.
Next up, “Rappel” jumps in like an angry bea- ver. Its fast-paced beat, tight production and Agren’s whistle/programming manage to keep you off-balance up to the end. “Dracul Of Nancy” and “Tati Bake 2” may be slower, but they still manage to invoke Frank Zappa ghosts, what with their angular lines, use of vibes and key- boards both acoustic and electronic, implied and overt funk beats, and an overall sheen that sug- gests a wee bit of humor. Unlike the airborne “Mr. Piccand,” what the general drift of this release is now expressing is something closer to an aban- donment of anything less than an embrace of pure whimsy and love of corralling the massive talents of these two, who manage to combine not only amazing technique but also a love for delicious, unconventional storytelling." – John Ephland / Downbeat November 2014.

Additional recordings, tracks 3 and 10, recorded by Simon Steensland at No Klang, Stockholm, Sweden, 2013.

Photos by Elliot Elliot, except backside of tray by Morgan Ågren.